Marketing trends before and after the coronavirus shutdown: what a billion app installs show

When we last looked at the implications of coronavirus on app marketing, we saw that in spite of the challenges, gaming ad spend was up 25%, e-commerce was up 34%, and social media was up 29%.

Since our last post, we’ve learned much more about the financial impact. And in an effort to do our part, we released free tools and training for 180 days to help SMB marketers adapt their advertising tactics to all the changes.

Now let’s get into the latest data and look at what is changing as a result of this unprecedented global shutdown.

My focus this time: comparing pre-shutdown 2020 with post-shutdown 2020. In other words, what has changed in the mobile marketing space as a result of shutting down massive segments of our economy?

To do so, we compared data on about a billion app installs, looking at changes from weeks two to nine (January and February, primarily) to weeks 10 through 17 (March and April, mostly).

App installs are up

Overall app installs are up 18.9% from the first two months of 2020 to the most recent two months. 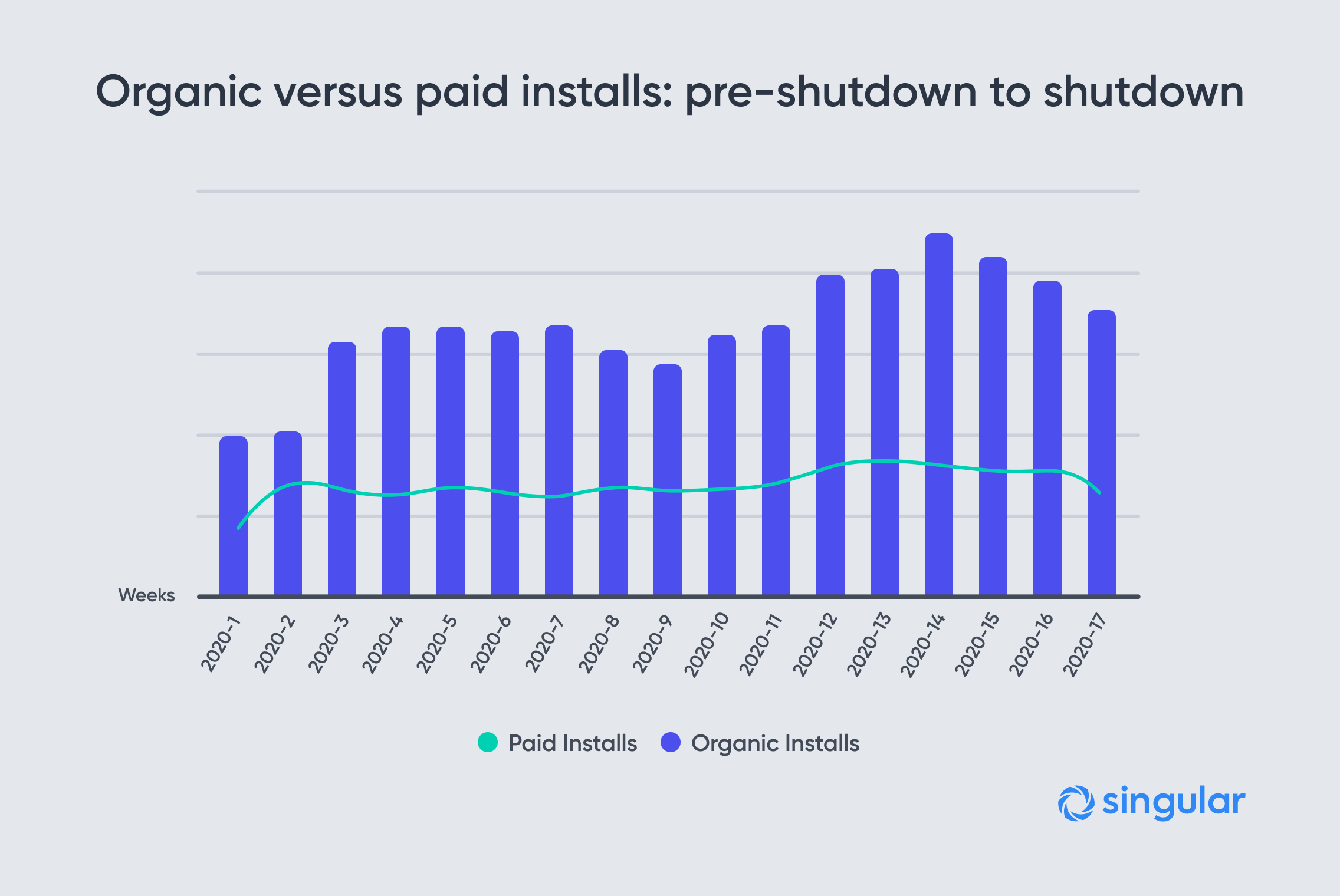 On one hand, that’s not terribly surprising. Seasonal data from 2017, 2018, and 2019 show us that in the U.S., there’s typically a jump in mobile marketing and app install behavior from calendar Q1 through Q2, jumping again to Q3 and culminating just slightly higher in Q4.

So part of this could be seasonal.

The reality, however, is that 2020 is anything but a normal year. An early March report by a UN agency said that COVID-19 would likely cost the global economy $1 trillion. More recently the World Economic Forum, however, pointed out that not even during the Great Depression of the 1920s or World War II did huge segments of the global economy just shut down. As a result, the International Monetary Fund, now estimates the cumulative loss into 2021 to be about $9 trillion.

In other words, this is not normal. We haven’t even stabilized to a new normal yet.

The good news for mobile marketers: while nothing is easy or even good right now, they’re in the right sector at the right time. Everything is going digital as physical distancing protects us from wider infection. App installs could have just totally cratered if they were following the overall economy.

We’re using Instacart to get our groceries. Doordash to get our food. Walmart and Amazon to get necessities delivered. We’re ordering online and picking up curbside. We’re moving social engagement to HouseParty and Facebook and TikTok. We’re moving work and productivity to Zoom and Microsoft Teams and Slack.

Organic installs are disproportionately up

Paid app installs are up 15% over the pre-shutdown 2020 weeks. Organic app installs — those generated by unprompted visits to Google Play or the App Store to find and download a new app — are up 21%. And it’s not just an organic uplift impact.

Organic uplift is when paid marketing generates a halo effect of more-than-usual organic behavior as well. It can be due to algorithmic optimization: a marketplace like an App Store sees more activity for one particular brand or app, assumes it’s trending, and features it or highlights it more. It can also be due to good old-fashioned word of mouth marketing: people talking about new products, brands, or services that they’re experiencing.

But while organic uplift is a thing, a significant study I’ve done on it in the past suggests it’s often around 1.5X … one unit of paid activity driving half a unit of additional organic activity.

That can be different for super-viral categories, but overall — and this is an all-category dataset — I’ve seen it at about 1.5X.

In raw numbers, however, the organic boost is 3.4X. And in terms of percentage of app installs being organic, we’re seeing percentages in the high 60s moving towards the mid-70s.

Some of the categories we’re seeing that happen in are obvious, like streaming. 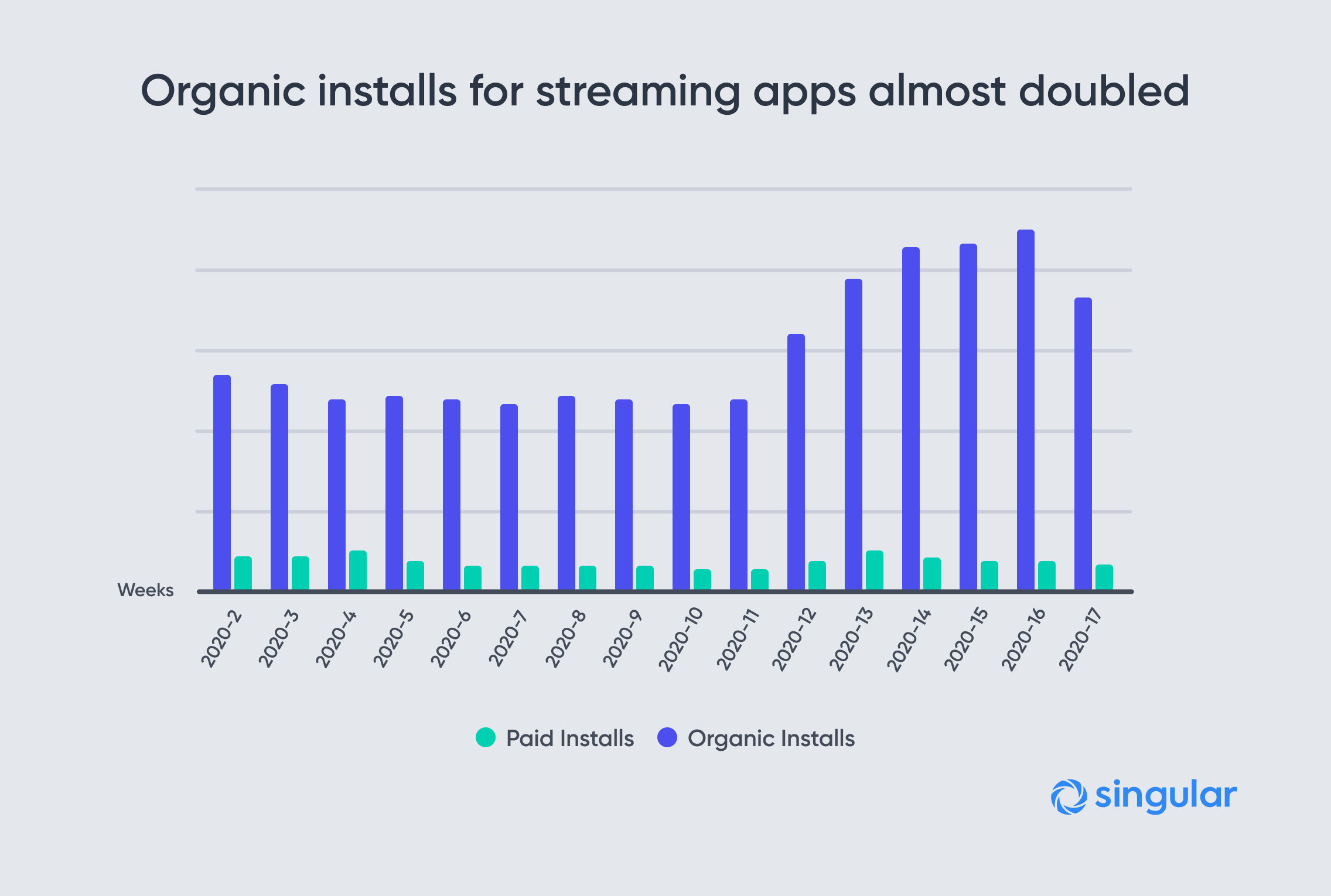 We’re essentially seeing 2X peak organic downloads for streaming apps compared to the floor in the first two months, which was already high. Meanwhile, paid has barely budged, with a slight increase in week 13, but subsequent decreases. (Note: the above chart is missing a day of data for the last week, so the effect is even stronger than pictured.)

Health and fitness follows a different pattern but illustrates the same point.

While health and fitness was up in the first full week of 2020, that’s normal and expected. New Year’s resolutions are kicking in, and people are buying fitness equipment, installing workout apps, and focusing on losing all the weight they gained over the just-finished holiday season.

It then drops, also naturally, in January and February, but rebounds and hits new highs in April. Why? People are shut down and locked in: they can’t go to the gym. So the gym has to come to them, and the living room or spare bedroom becomes the new home gym. 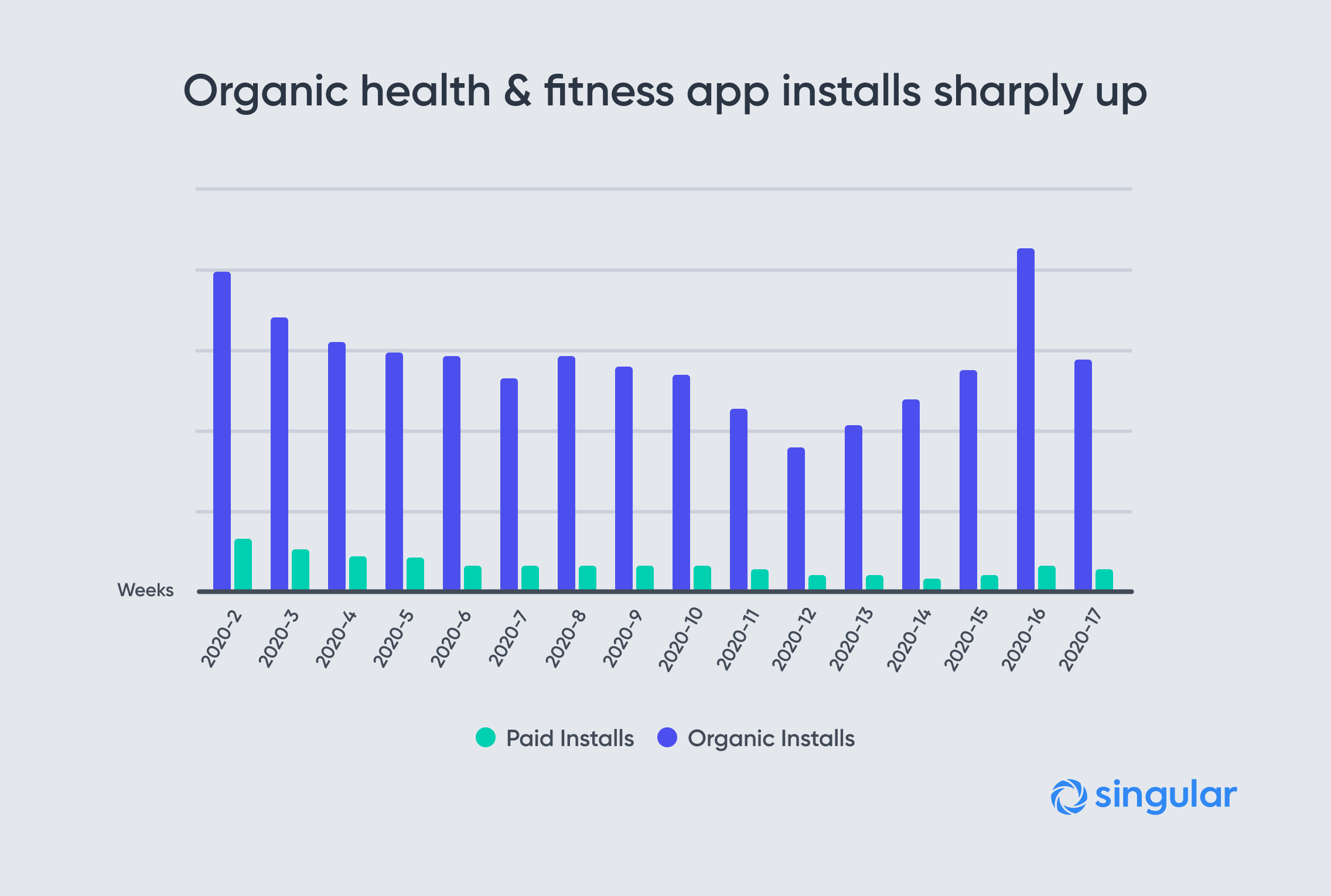 Overall, organic installs are up across all categories by over a fifth, and we can attribute that to changes in consumer shopping, leisure, work, and learning habits. (Again, the above chart is missing a day of data for the last week, so the effect is stronger than pictured.)

Whether this is a trend with long-term legs, of course, is another matter. Everything is too volatile right now to be certain of much. One thing that seems clear: where Coronavirus is accelerating trends that were already existing — digital retail, eSports, on-demand services, and so on — we’re likely to see sustainable growth, even if there’s some retrenching post-Coronavirus.

Ad-driven app installs are also up: 15%

It’s also interesting to see that paid user acquisition is continuing and even increasing, during the shutdown. That’s probably partially thanks to lower advertising prices: Sai Srinivas Kiran, Co-founder & CEO of Mobile Premier League, a 35 million-user esports platform in India, told me that his customer acquisition costs have dropped by 50%.

And we know that savvy marketers take advantage of opportunities.

As Bob Benz, president at Advanced Telecom Services, told us a few weeks ago, advertising is literally a better deal today:

“It’s counterintuitive to purchase stocks when the market is tanking, but all the experts will tell you it’s the best time to do so,” Benz says. “It’s the same with advertising. Today, Facebook and Google advertising is 20% cheaper than it was pre-coronavirus and internet use is at an all-time high. Take advantage of it! You may never have this opportunity again.”

There’s a lot more work here to understand trends and interpret data, of course. Next week we’ll look deeper into specific verticals to understand what is really happening as a result of COVID-19.

Until then, stay safe!