What does it even mean to be a mobile ad network anymore?

In this multi-part series I’m going to explore the new evolving giants: the titans of adtech. Though this post and future ones we’re going to look at:

Let’s start here: we’re not talking about Facebook or Google. As we all know, those are still the true titans of adtech and they’re undergoing their own evolutions in different ways. Nor are we talking about the mini-SANs, the other social networks like Snap, TikTok, Twitter, and Pinterest.

Add those all up (with Apple Search Ads) and you’ve got perhaps 75% of the mobile user acquisition pie.

That massive majority power position, however, is not as safe and unassailable as it once might have seemed.

For one thing, SKAdNetwork has made an impact. Facebook and Google both saw some declines in mobile user acquisition market share, and Apple Search Ads had some massive increases. But it wasn’t just ASA capturing more share at the expense of the duopoly. Even if profitability took a hit — like Snap’s recent quarterly financials — many of the formerly mid-tier UA partners have seen market share growth, at least in terms of Singular customers’ ad spend, in 2021:

In a time of uncertainty, Google and Facebook both reacted slowly. Other ad networks reacted quickly, with some charging forward to adopt SKAdNetwork and some racing to push more dubious solutions like device fingerprinting. (And some doing both: one publicly and the other privately). Nimbleness pays off, and quickly jettisoning some of the cultural/emotional baggage about the world that was enabled quicker adaptation.

But it’s clearly not just about share of wallet growth.

There’s much more going on.

What actually constitutes an ad network is changing.

In the past 10-15 years of massive mobile adtech and mobile publishing expansion, there’s been an explosion of innovation that has manifested in the development of multiple overlapping advertising and monetization related capabilities.

These capabilities include but are not limited to:

Ad networks are taking bits and pieces of these and mixing and matching them. But not just those.

Ad networks are adding owned components that operate as first-party data accumulators: studios that make apps and games, vacuuming up not only extensive device and user data but also acting as real-world testbeds for consumer behavior vis-a-vis advertising performance. And studios or publishing houses are adding ad networks to create vertical integration opportunities plus own all the components needed for success from acquisition to onboarding to user engagement to monetization to retention.

Many of these components have significant overlap, but here’s an oversimplified view of how they stack up. In the golden age of adtech expansion, venture capital fueled the creation of all these interrelated capabilities and just as marketing analytics grew almost 10,000% in a decade, adtech exploded. By 2016, there were almost 1,000 logos in the mobile LUMAscape, mostly young companies less than a decade old.

“Between 2006 and 2017, hundreds of ad networks, dozens of DSPs, SSPs, exchanges, anti-fraud solutions, attribution solutions, and so on were able to accumulate billions of dollars in funding,” says Maor Sadra, former CEO of AppLift, now CEO of INCRMTAL.

Have an idea? Build it!

Start another adtech company? Go for it!

The cash was flowing and the solutions — and companies — exploded.

Now we’re seeing convergence as the thousands of ad networks and additional thousands of complementary puzzle pieces are getting sorted into fewer piles of consolidated and aggregated key players. It helps that many are now public or are owned by private equity companies, providing easier access to massive amounts of capital. (And, in turn, are forced to offer the public markets ever-bigger growth strategies and expansion plans to justify the infusions of cash.)

This was probably a natural adapt-or-die next step — markets don’t stay as atomized elements and components of companies forever — but it’s been accelerated by the privacy revolution and the long drawn-out death of third-party data.

First-party data is the new game, and this new game demands aggregated scale. And something more.

In other words: one-stop shopping for the mobile-app-centric enterprise.

Current titans: Puzzle pieces they own

So what do the emerging titans of adtech look like today? Here’s five significant ones — generally speaking SDK networks — with a breakdown of what each one offers. I’m indebted in this section to insights from Brett Bauer, co-founder and CEO of Appfluencer, and Alon Nafta, VP of Product at Singular.

Here’s how they stack up: 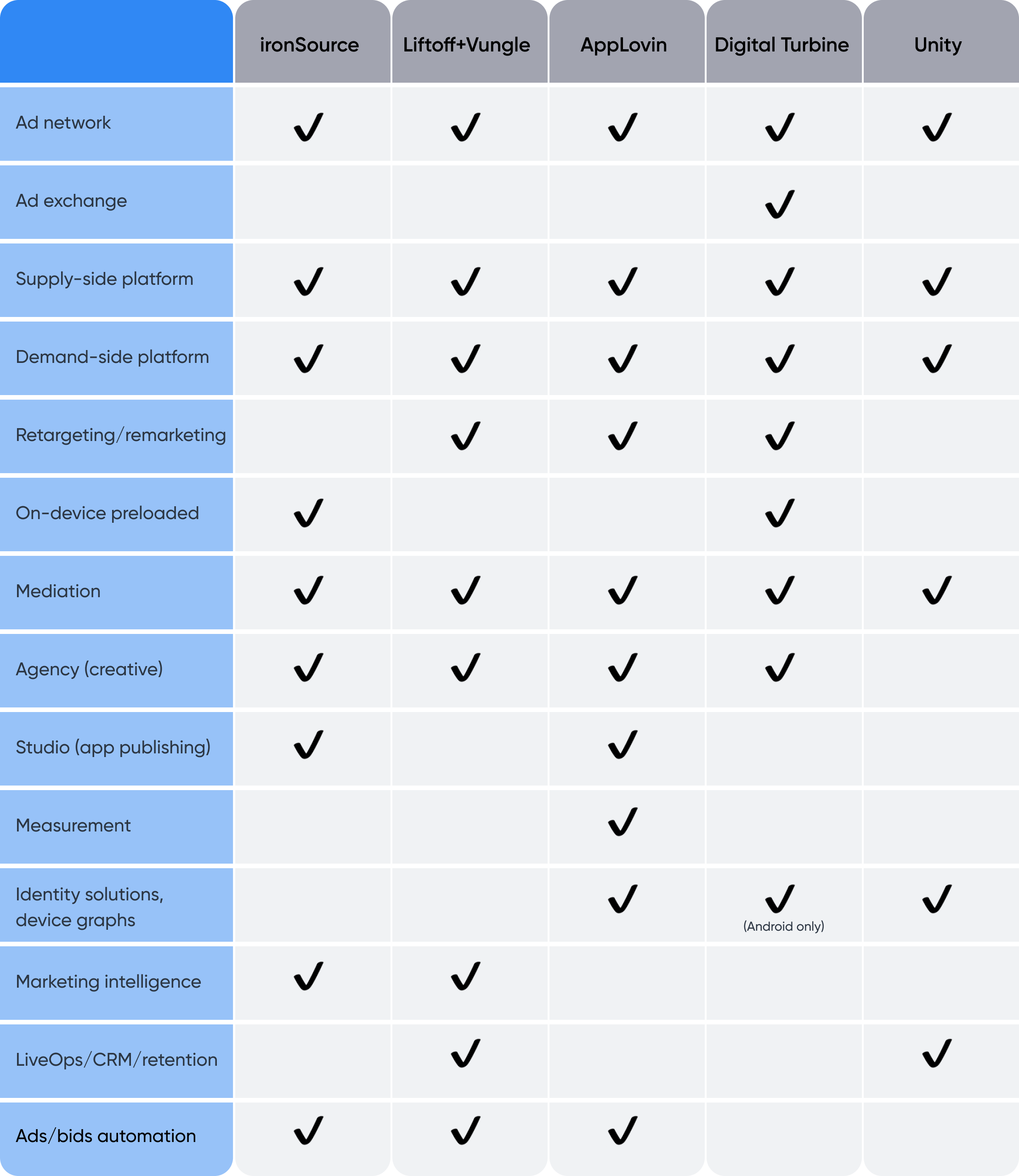 Additionally, many of these adtech giants have a historical core of competence that is now surrounded by additional capabilities. As Bauer says, ironSource is primarily an SDK network that recently opened their excess inventory to the exchange, Liftoff+Vungle is a closed DSP + video SDK network that can do some algorithmic attribution, AppLovin is trying to offer the entire stack of everything a mobile marketing could ever need, while Digital Turbine is adding components to a historical core of telco solutions.

As a kid I collected hockey cards, and at school we’d stand in circles fanning our cards out and compare both doubles and gaps in our collections with each other. Someone looking to deal would show his or her doubles, and we’d say “got ‘em, got ‘em, got ‘em” or “need ‘em” for players we already had or cards we were missing.

Sometimes I think the adtech giants are looking at puzzle pieces in the ecosystem in much the same way, at least internally.

As it stands right now, here’s the count of what each emerging giant of adtech offers, out of the 14 different adtech components I’m checking for:

It’s important to note that having a lower number isn’t necessarily an indicator of a lesser solution. It can be simply symptomatic of a different approach to the problems of mobile marketing, mobile growth, and mobile monetization.

For instance, Unity has a massive advantage since it’s the development platform for tens of thousands of games: 71% of the top 1,000 mobile games are made with Unity, and 2.5 billion people play games or enjoy experiences created with Unity every single month. And Unity is likely the most organic of all these emerging adtech giants, growing more by expansion than acquisition. The possibilities inherent in being so close to the development environment and in touch with so many game players are obvious.

In the same way, sheer scale in ad buying, placement, and management is a massive advantage as well.

Adtech giants can’t collect data the way they used to, and it’s likely that their abilities will be further constrained in the future. But as they increasingly consolidate consumer touches and first-party mobile user experiences, they position themselves better and better for improved targeting and improved performance.

It’s a simple equation: those who work better in acquiring users and customers will — assuming level playing fields — do better and grow faster.

As it stands right now, however, AppLovin is doing a pretty good job of collecting all the components that a mobile marketer might need. The bigger question, of course, is whether getting them all in one place is a good thing that mobile marketers actually want.

More to explore: is adtech aggregation good for mobile?

There’s much more to chat about here, but I have to leave it for another time.

The answers to each of those questions could vary.

We’ll also look at the future of measurement in a smaller, more consolidated market. Where does it fit? Does it matter? How does it work? And I’ll dive into one of the key drivers of consolidation — the church of first-party data — and investigate whether this is actually all it’s cracked up to be as an industry-saver.

All that and more, coming soon.

Sign up to our newsletter so you don’t miss any posts (scroll down a bit on this page to sign up). Yell at me on Twitter if I’ve said something stupid.

Oh, and if you’re working through these changes in our space (who isn’t?) and you want some guidance, there are more than a few pretty smart people at Singular who would be happen to discuss the evolving industry and what you need in your growth stack moving forward.

Book some time with them, and they’d be happy to listen and advise, as well as do a bit of show and tell on where Singular fits.

I could not have written this piece without insight and guidance from Alon Nafta at Singular, Brett Bauer at Appfluencer, Thomas Petit at, well, Thomas Petit, and many others. Also got some insight from Offer Yehudai at Digital Turbine, Eric Seufert at pretty much everywhere, and Dennis Mink at Liftoff. All mistakes, however, are my own.