Mobile Tutorial Series – What is an IDFA or Apple Identifier for Advertisers?

IDFA is the abbreviation for identifier for advertisers on Apple mobile devices (iPhones). You can think of an IDFA as somewhat analogous to an advertising cookie on the web, in that it enables an advertiser to get notified when a user of a phone has taken an action like clicking on their ad or installing their app.

And now, with the release of iOS 14 in September, it is essentially killing the IDFA. (More on that later.)

IDFAs took the place of cookies in mobile advertising delivered to iOS devices because cookies are problematic in the mobile world, where people spend most of their time in apps, not the web. Advertisers want to know when their ads create results. The IDFA has helped them optimize ad campaigns, target people who are most likely to be interested in what they’re offering, and stop advertising to people who are not interested.

Third-party cookies, which are commonly used on the web for tracking, tend to have short life spans: anything from one to thirty days on average. By contrast, the IDFA doesn’t change unless a user decides to change it in their phone settings. Few consumers feel a need to take this action, so IDFAs can offer a better foundation for a persistent and anonymized consumer profile.

Before IDFA, advertisers could track actions on iPhones using a permanent device identifier called UDID, or universal device ID. The big advantage that IDFA offered over UDID is consumer choice. A UDID was a permanent device number, and sharing it could not be turned off, whereas users had the option to limit ad tracking, or to change their IDFA periodically.

And, of course, they still do.

But in iOS 14, IDFAs will only be available when people explicitly opt in to tracking. And the opt-in has some scary language that essentially ensures most people will not accept. 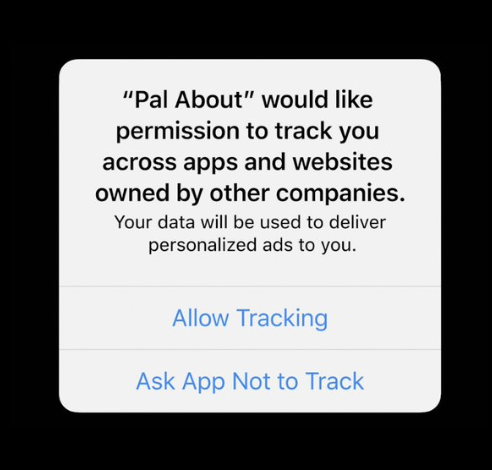 At the same time, IDFA is the only ID that Apple allows advertisers to use to understand the advertising actions on its phones. This reflects Apple’s commitment to the ideas of privacy and choice. And for iOS 13 and print, it also enabled a robust advertising industry in which brands target likely responders and drive revenue for app and mobile publishers.

Now everything is changing. Which is why Singular was the first MMP to announce support for Apple’s replacement technology: SKAdNetwork.

If the IDFA is available, it’s very, very useful for advertisers.

For example, when consumers take actions because of ads, like clicking a banner, playing a video, or installing an app, media companies can pass the IDFA with information about the consumer action that took place because of the advertising. Most media companies do pass IDFAs. Some media companies, including some large social networks, do not pass device IDs to advertisers, but do allow you to target specific IDs within their properties. Many companies also leverage IDFAs as a tool for fraud detection. By monitoring the stream of ad actions and associated IDFAs, advertisers get important signals that may indicate advertising fraud.

As of iOS 14, however, advertisers will have to use Apple’s new framework, SKAdNetwork.

You may also occasionally hear about an identifier called IDFV. This stands for identifier for vendors. An IDFV is assigned and shared by all apps from the same company. Sometimes companies with multiple apps base their marketing efforts and analyses on IDFV because they only change if a user uninstalls all apps from a particular vendor.

The IDFV is useful, but can’t be used for ad attribution.

When the IDFA is available because consumers opt in, IDFAs and app attribution capabilities like those offered as part of the Singular platform is extremely helpful. Marketers can understand which campaigns, executions, and media partners are responsible for desirable consumer actions. Using these insights, they can calculate the ROI for every program and tactic and optimize their marketing to the most profit-generating tools. The IDFA also enables a marketer to target specific individuals that have taken actions in the past.

This sort of individual targeting has become increasingly common as programmatic media and social media advertising grow in popularity.

With the changes coming in iOS 14, however, advertisers need to find a new methodology of attributing mobile ad conversions. Apple has offered the SKAdNetwork framework, and Singular is building on that to offer a free and open standard for managing mobile app attribution using SKAdNetwork.

We call it SKAN.

While it’s evolving fast right now, the big picture is that SKAN describes how SKAdNetwork should be used in a standardized way by the ecosystem to overcome some of its limitations and enable its adoption in a scalable and trustworthy way.

Get all the details on SKAN here.

And, if you’d like some input on how to manage mobile marketing and optimize campaigns post-IDFA, please do get in touch. We’d love to walk through what we’re doing with our customers. Here’s a good place to get in touch.