IDFA survey: 62% of consumers will not allow app tracking in iOS 14

Ad personalization capability will drop by 44% in early March when Apple releases iOS 14.5. That’s when Apple’s new privacy provisions will be fully implemented and each new app install or update will be required to ask permission for tracking.

In a survey of 600 consumers conducted this February, 61.5% of people said they would click Don’t Allow if their phones popped up Apple’s new App Tracking Transparency prompt.

Interestingly, there are some significant gender differences.

And there are also certain factors that consumers say will influence them to click OK. 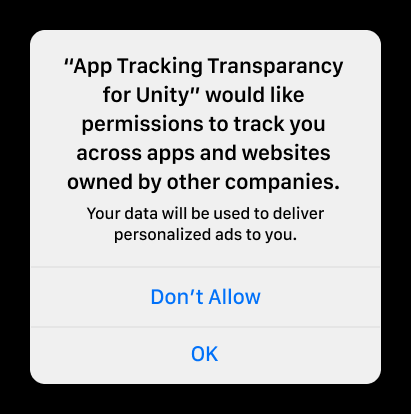 Almost exactly a year ago, I analyzed data from 390 million devices to identify how many people were implementing Limit Ad Tracking — Apple’s older version of privacy protection from tracking on iPhone and iPad. What we found was that Limit Ad Tracking on iOS was up to 31.5%. If our 2021 survey results hold true in real-world customer behavior, almost twice as many iOS users will essentially be invisible on a granular per-device basis to mobile marketers.

Consumers: who will say yes to tracking in iOS 14? 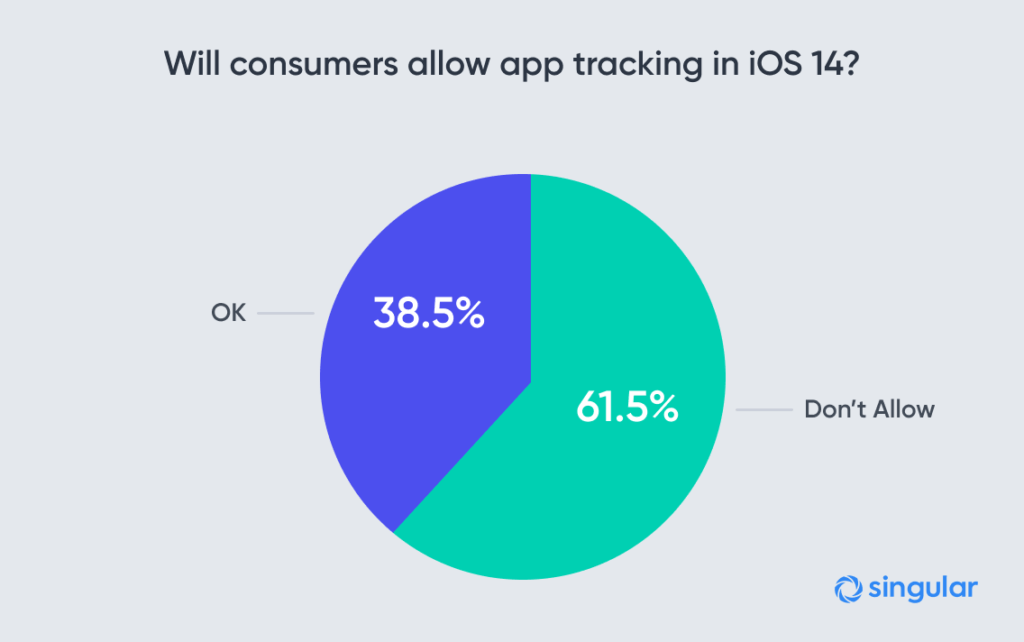 Interestingly, women and men show significant differences in desire for privacy, or at least not allowing tracking. While in both cases a majority will not allow tracking, 67% of women say no while only 55% of men dissent.

There are also key differences by age.

Younger and older people tend to say no to tracking more than middle-aged people, and the youngest are the most opposed. Almost four in five teenagers aged 16 or 17 say they’ll click Don’t Allow in the ATT prompt, while 71% of those aged 54+ agree.

35-44 year-olds were the most accepting of mobile tracking, with only 44% saying they won’t allow tracking. And that’s the only age category where a majority of people are OK with being tracked. 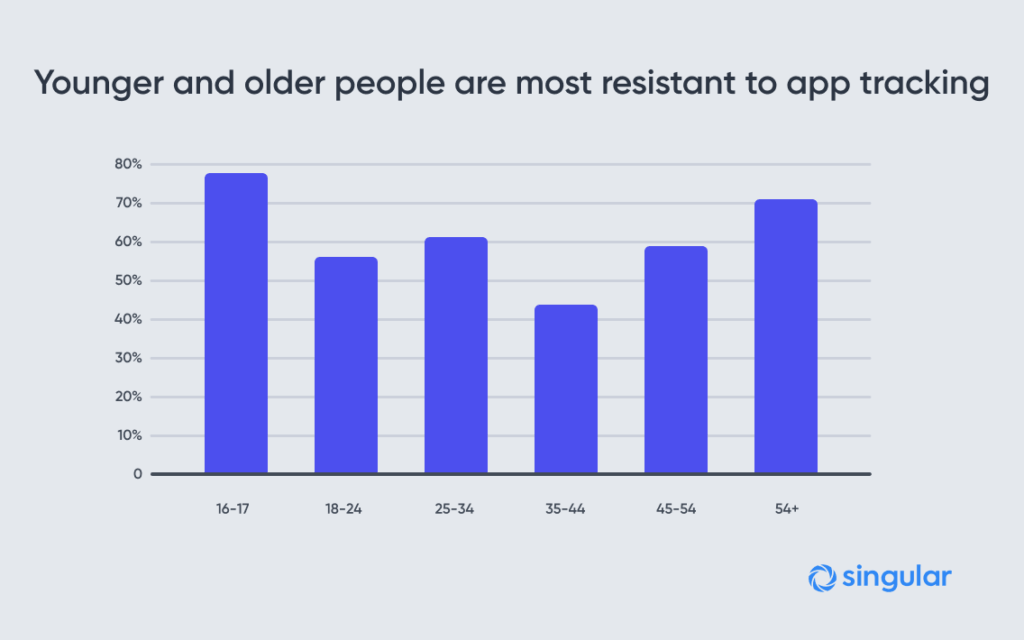 There are, however, some reasons that will make it more likely for consumers to say yes to tracking. Unfortunately, they’re not necessarily good ones for startups or lesser-known companies, because the single biggest predictor of consumers providing consent for tracking in iOS 14 is brand. How well people know you — and if they trust you — is the single most important factor making them more willing to allow tracking.

There is one other big factor in favor of tracking, but it has nothing to do with what you might expect: ensuring apps stay free.

Rather, it’s simply explaining what you’re going to do with the data you collect. 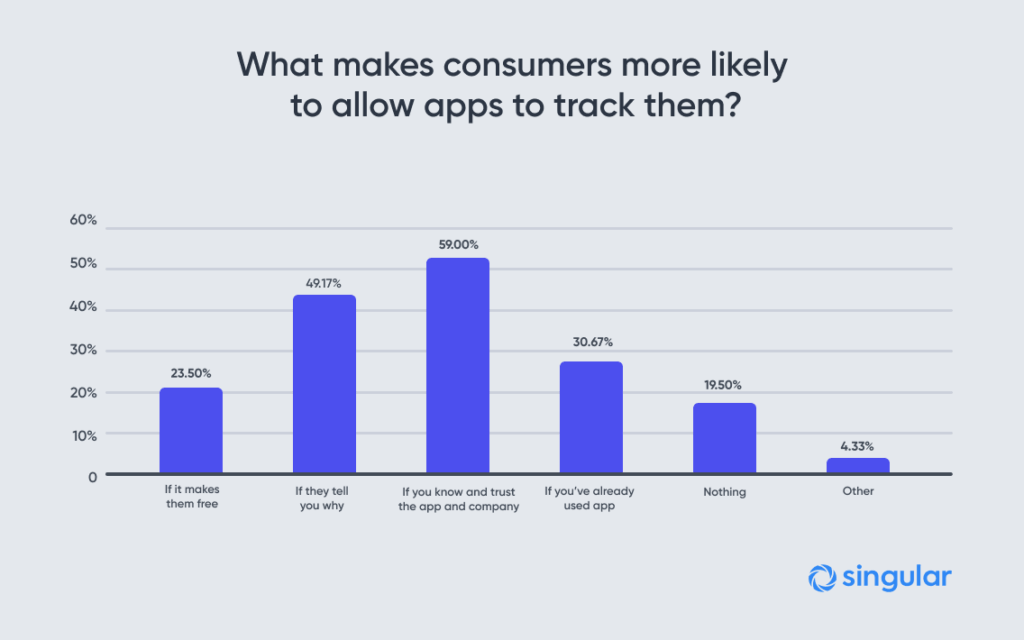 59% of people will allow apps from brands they know and trust to track them. Almost 50% will be more willing to allow tracking if apps can explain why they want users’ data. This makes perfect sense, but it won’t solve too many problems for marketers who have only two short lines of small text in the ATT pop-up to explain what they’re doing. On the other hand, if you can explain in-app what data you want and why you want it, this survey suggests you have a good chance at getting tracking consent.

Note, however, that for 20%, no reason will suffice.

Nothing will convince them to allow app marketers and publishers to track them. 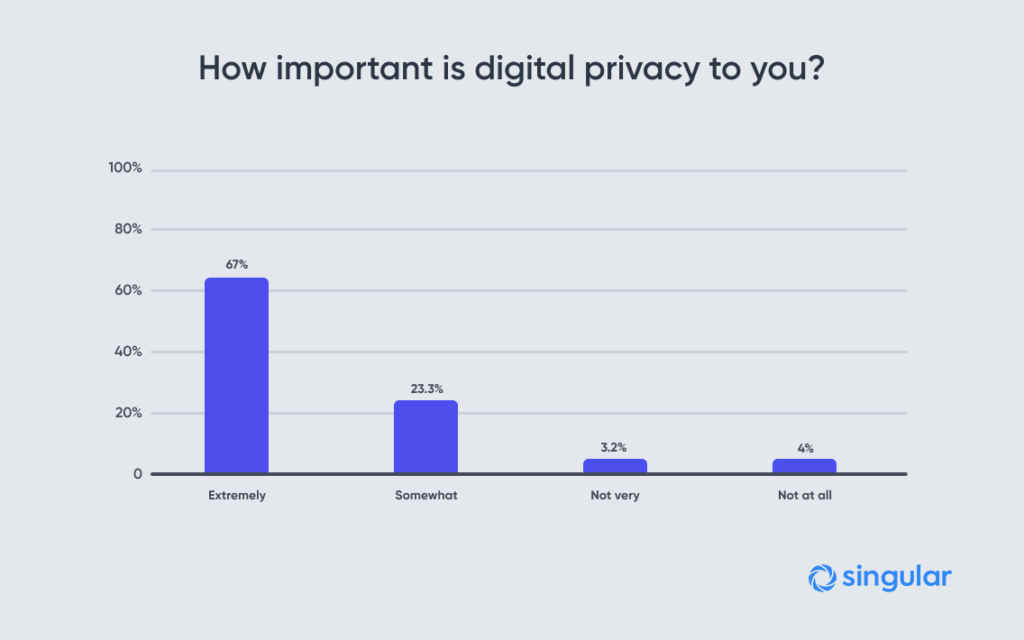 There’s no gender difference in the importance of privacy, but there is an age difference.

According to our survey results, privacy becomes more important as you get older. 75% of those 35 or older say digital privacy is “extremely” important versus 65% of those 43 or younger. (If you’re wondering about the relationship between this data and the U-curve graph on tracking by age above, 69% of those aged 16-17 were also on the “extremely” important side, meaning that young and middle-aged adults were least concerned about digital privacy.)

Interestingly, when given the choice between privacy or paying, most people chose paying.

At least, on a survey.

73% of consumers say they’d rather have more privacy even if it meant having to pay for more apps or services than they currently do. Only 27% said they would sacrifice privacy for more free apps and free services. 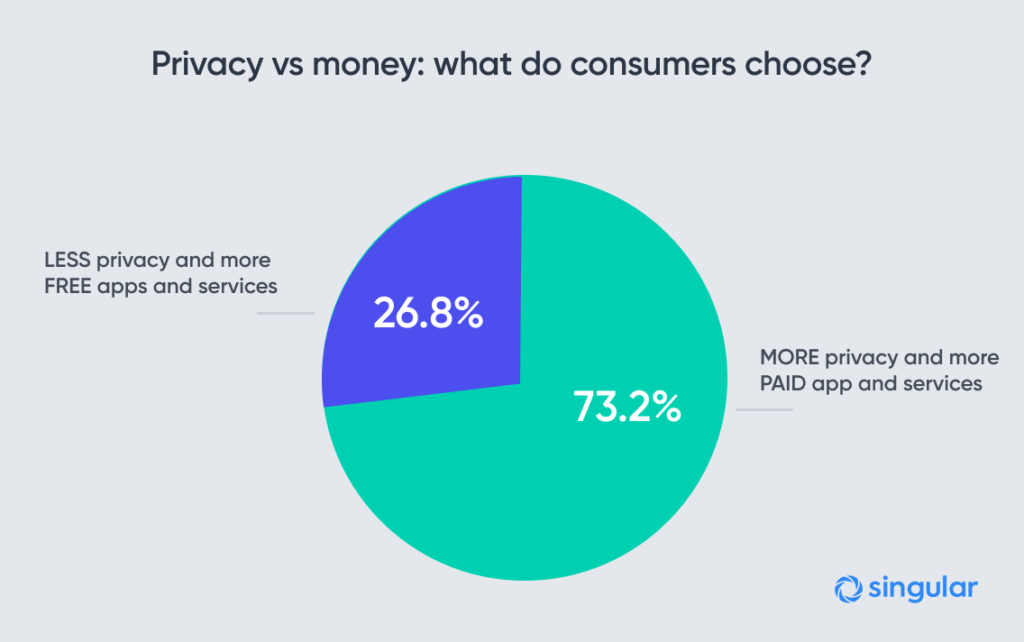 Reality will have the final word here, however.

It is true that consumers have chosen paid services, often with subscriptions, increasingly over the last few years. We’ve seen that in Netflix and Disney+ as well as paid news subscriptions, gaming subscriptions, and even emerging methods of buying and accessing mobility services like cars. An open question, however, is whether this will translate into continued growth in mobile subscriptions in the global app economy.

And in fact 40% say they would not pay $1 per year for even massive and engaging apps like Facebook or Google. 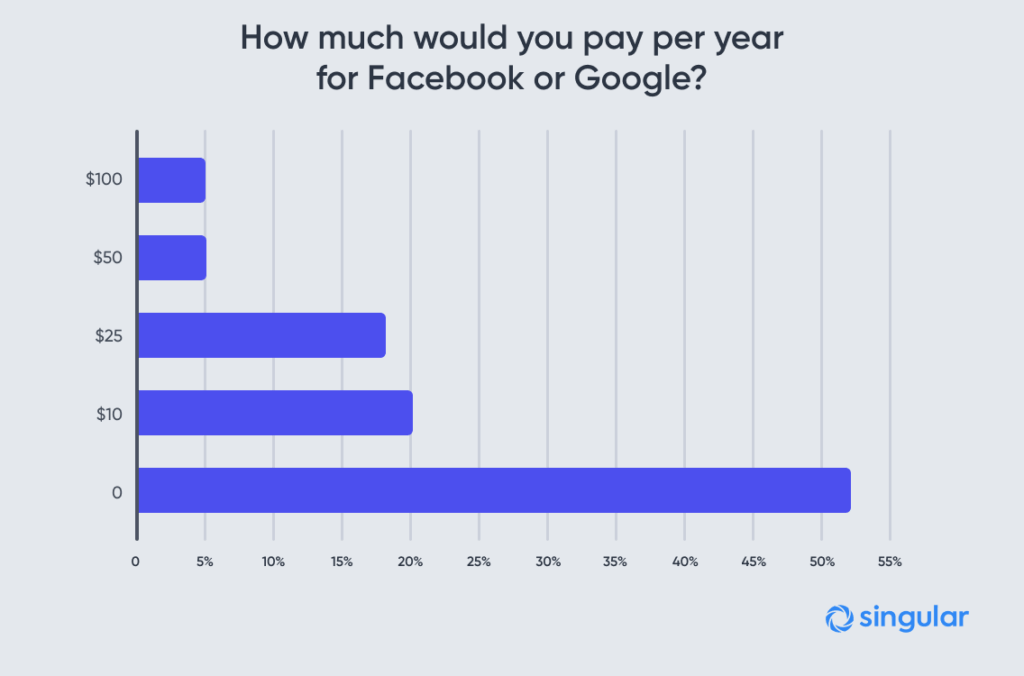 Mobile publishers might take solace in the fact that 60% say they would pay something, but here’s an important point. Even if 100% of American users paid $100/year for an ad-free Facebook, Facebook would lose money on the deal.

Facebook earns an average of $41/user every quarter for users in the U.S. and Canada, so even at the highest price we surveyed, Facebook revenue would drop drastically as a paid service. The reality is that most consumers — and maybe most mobile marketers too — really don’t have any clue how lucrative Facebook is per user, especially in North America.

The reality of digital privacy, however, is that most people don’t really understand what apps and websites and track. 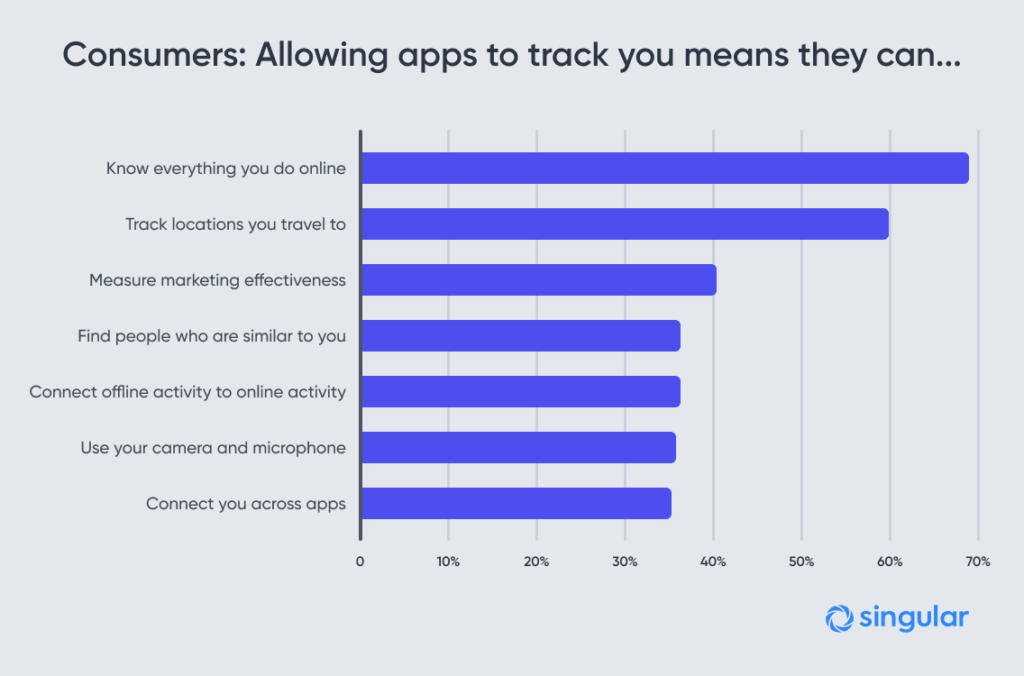 Consumers are savvy to the fact that marketers can connect offline activity to online activity, however.

But only 30% know that the digital tracking that Apple is working hard to get user permission for is actually related, more than anything else, to measuring marketing effectiveness. That’s something that might not come as a shock to most digital marketers, but it will also cause a grimace: consumers are largely unaware of the actual stated purpose of Apple’s IDFA, or Identifier for Advertisers, which iOS 14 and App Tracking Transparency are, by and large, aimed at.

Perhaps also surprisingly, only 55% of consumers think that Apple’s new privacy provisions in iOS 14 will actually increase their digital privacy. 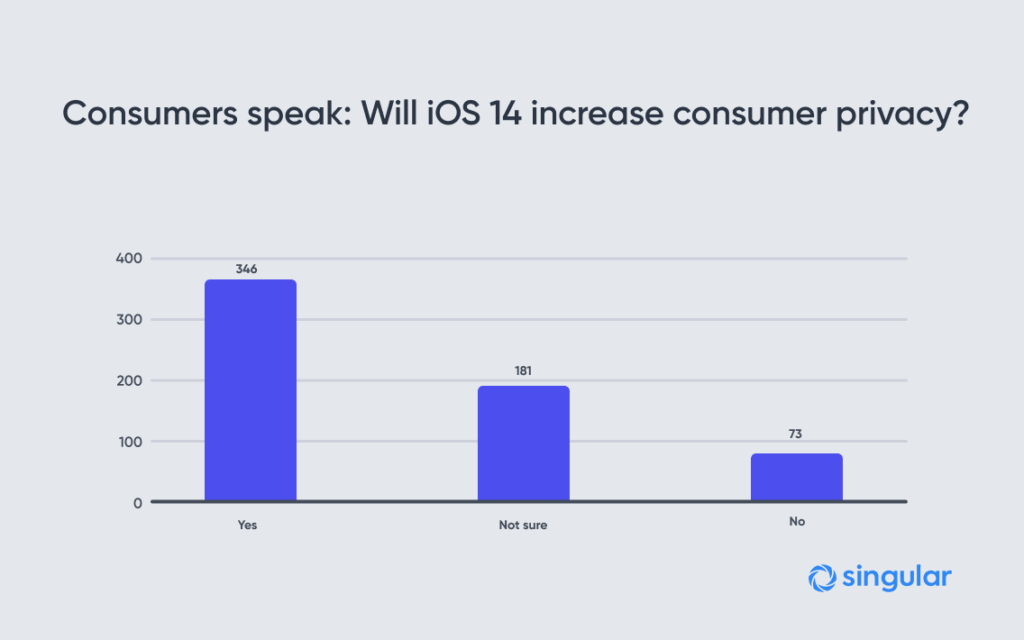 55% say yes, but a full third are not sure. And over 10% say no, it won’t … perhaps being cynical and either thinking that tech companies will find ways around the privacy guidelines, or that the guidelines themselves are more window dressing than reality.

Astonishingly, iOS and Android users are almost identical in their responses. While 53% of Android users say Apple’s policies will increase privacy, only a few percent more — 56% — of iOS users agree. And 35% of them are not sure.

Google is consumers’ most-trusted big tech player, with 43% of respondents picking the Mountain View company. Apple came in at 37.5%, but 36% said that they didn’t trust any of the big tech companies.

35% trust Amazon with their private data, and 23% trust Facebook. 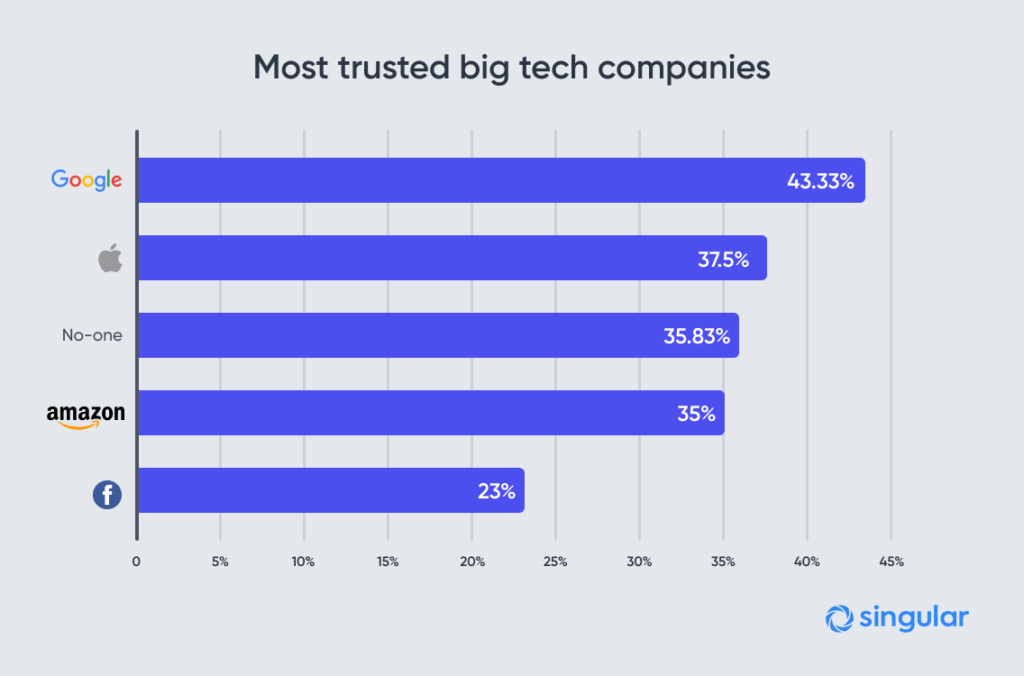 Summing up: IDFA scarcity and a sea change in marketing measurement

It’s possible that the death of the IDFA has been prematurely predicted. If 40% of iOS users do actually allow marketers to track advertising effectiveness by clicking OK in the ATT pop-up, that’s not insignificant.

(In fact, you could argue that 40% is a big enough percentage to make aggregate judgments about the other 60%, at least in some things.)

But even at a 60% reject rate, it’s clear that Apple’s privacy-safe SKAdNetwork attribution framework is the way to go for the majority of marketing measurement in the mobile app space on iOS. That’s especially true when you take into account the massive growth we saw last year in the Limit Ad Tracking “on” segment on iOS … it had doubled since 2016.

If that continues — and the global trend is towards more privacy, not less —- SKAdNetwork is likely to be the default attribution methodology for 80% or more iOS app installs within a year or two.