Since WWDC20 everyone in the mobile ecosystem has been busy learning, asking, discussing, and mainly, formulating solutions for measurement after iOS 14.

Today, we’re excited to walk you through our solution and update you on multiple new measurement methods that are now part of Singular’s SKAdNetwork solution. This solution is a major step forward for SKAdNetwork attribution, ensuring that your data is trustworthy, fraud-free, unlocking ROAS, and cohorts.

Our solution focuses on three areas:

A bit of background

At Singular, we’ve been super busy as we made it our goal to educate all who want to learn about the new reality of iOS 14 and SKAdNetwork. We’ve also formed a working group over a year ago with less than 20 companies, that now has 1400+ members – and we highly encourage you to join.

After launching our first-to-market support of SKAdNetwork in July (see more details in our Help Center), we decided to take things a step further. We drafted a new standard for implementing SKAdNetwork that we’ve called SKAN — a framework we strongly believe will be the foundation for how the entire mobile marketing ecosystem can run user acquisition post-iOS 14. We’re now releasing version 1.1 in GitHub – and we’re excited to update that multiple top ad networks and leading advertisers are collaborating with us to make the standard more usable and widely adopted.

Initially, we noticed hesitation from other MMPs to adopt SKAN, but nowadays, it seems like everyone is quickly accepting the reality of needing an SKAdNetwork solution with the principles Singular has introduced in SKAN. That makes us incredibly happy, and a bit proud, as we strongly believe this is where the industry needs to go in terms of both privacy and standardization.

It certainly benefits advertisers and marketers when there’s alignment across vendors.

Quick recap: what does an SKAdNetwork solution need to do?

If you haven’t yet, read the quick summary of what SKAdNetwork is and the main limitations it presents. In a nutshell, leveraging SKAdNetwork as an advertiser entails building three main functions:

Every one of these areas presents new challenges for marketers, but also opportunities for innovation that we believe can keep user acquisition alive and strong post iOS 14.

Establishing trust in your data is at the core of any analytics system — especially when dollars are involved. By default, the entity that receives the SKAdNetwork notification (postback) is the ad network, which needs to register with Apple. Ad networks can then forward install postbacks to advertisers and MMPs to validate them, which is rather straightforward as Apple cryptographically signs them.

Singular has over 2000+ proprietary data connectors to various ad networks, and we are working with our partners to embed SKAdNetwork data into APIs and reporting interfaces. Being the market leader in data aggregation, we will be able to quickly and accurately ingest the SKAdNetwork data in addition to all the other metrics we’re collecting today: ad spend, impressions, clicks, bids, video views, creatives, etc. 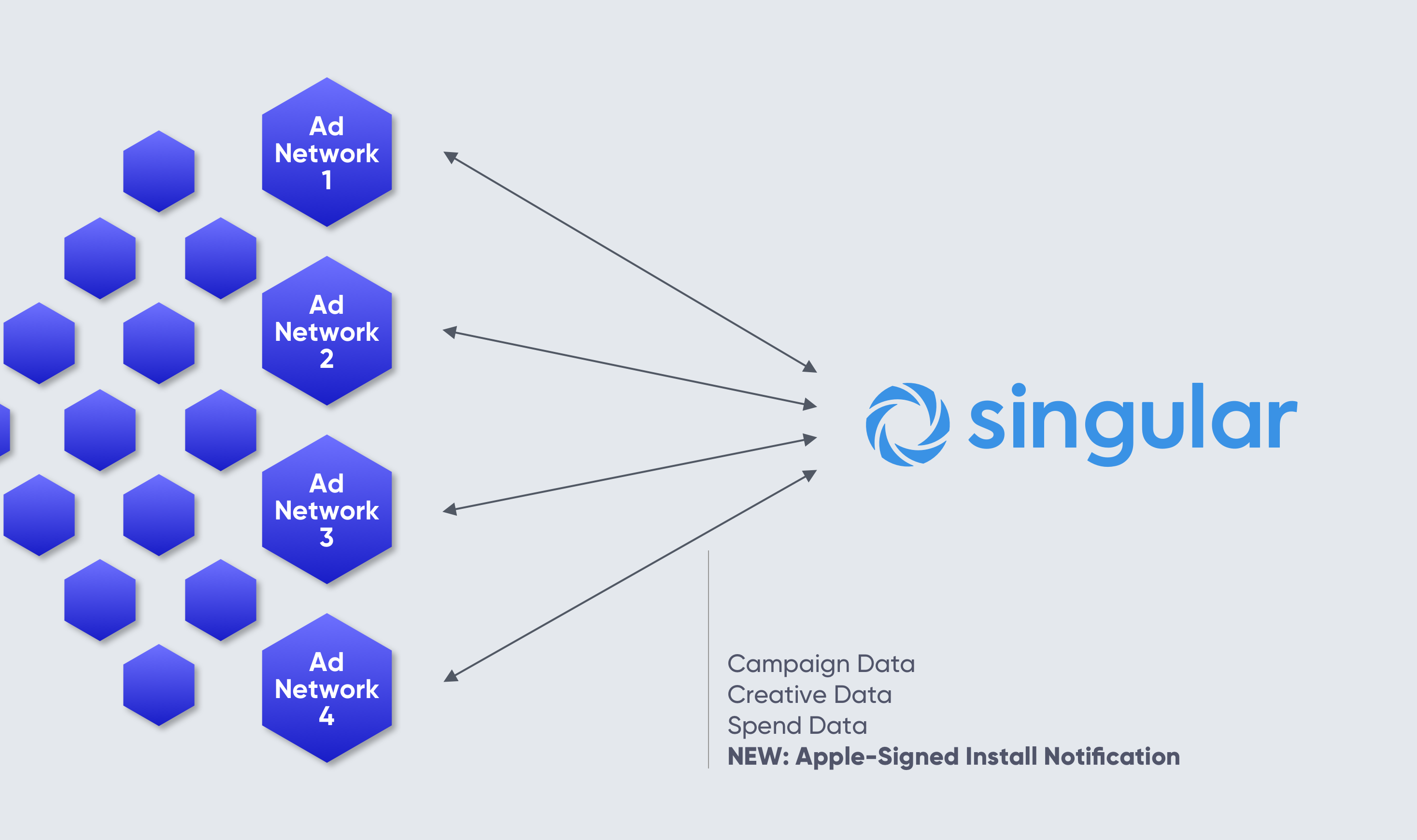 There is however one critical flaw that has to be addressed: Apple does not sign conversion values in SKAdNetwork. That effectively means that conversion values are self-reported by ad networks. That’s where Singular’s Secure-SKAN solution comes into play.

Secure-SKAN is a solution where Singular as the MMP will register jointly with every partner that will be publishing your ads. SKAdNetwork supports this by design, and we’ve been working closely with partners and advertisers (including Apple) to validate the solution is technically equivalent and solves the trust piece. On the ad network side, adopting Secure-SKAN is straightforward as you essentially receive the same exact postback — however, Singular is simply forwarding it.

Conversion management in SKAdNetwork is a complex, onerous task that if done incorrectly will yield fragmented, inaccurate data. However, when done right, the six bits of conversion values provided by SKAdNetwork can do quite a lot — including cohorts, which can be used for ROAS analysis.

Unfortunately, all this heavy lifting is the advertiser’s responsibility — and this is where Singular comes in.

When thinking about what our iOS 14 SDK should achieve, we had the following principles:

We’re excited to announce that our latest iOS SDK version with support for SKAdNetwork is now live. This gives our customers ample time ahead of iOS 14 to study, discuss, and integrate everything they need to be ready. (Access the documentation here.)

For customers leveraging Singular’s S2S solution, an update to the S2S integration will be required and will rely on the same principles. We will be reaching out to review the updates needed.

As mentioned before, in the SKAdNetwork solution, the SDK has a critical role in smart management of conversion data. This means that in addition to supporting basic models for revenue, retention and event optimization, our SDK will add some cool, unique features we’re especially excited about.

We all know by now that SKAdNetwork only supports six bits of data for conversion values. This seems rather limiting but can actually facilitate quite … a bit. Or, at least a little more than you’d initially expect.

When we say Smart Conversion Management, we mean the following:

To keep ourselves honest here, six bits won’t give us the ability to report on 180-day cohorts. We wish it did. But at the same time, establishing 3-day and even 7-day cohorts provides a great foundation for optimization that takes you a whole lot closer to true LTV.

Conversion management in SKAdNetwork is a fascinating topic, and we can’t wait to provide more details about it soon. 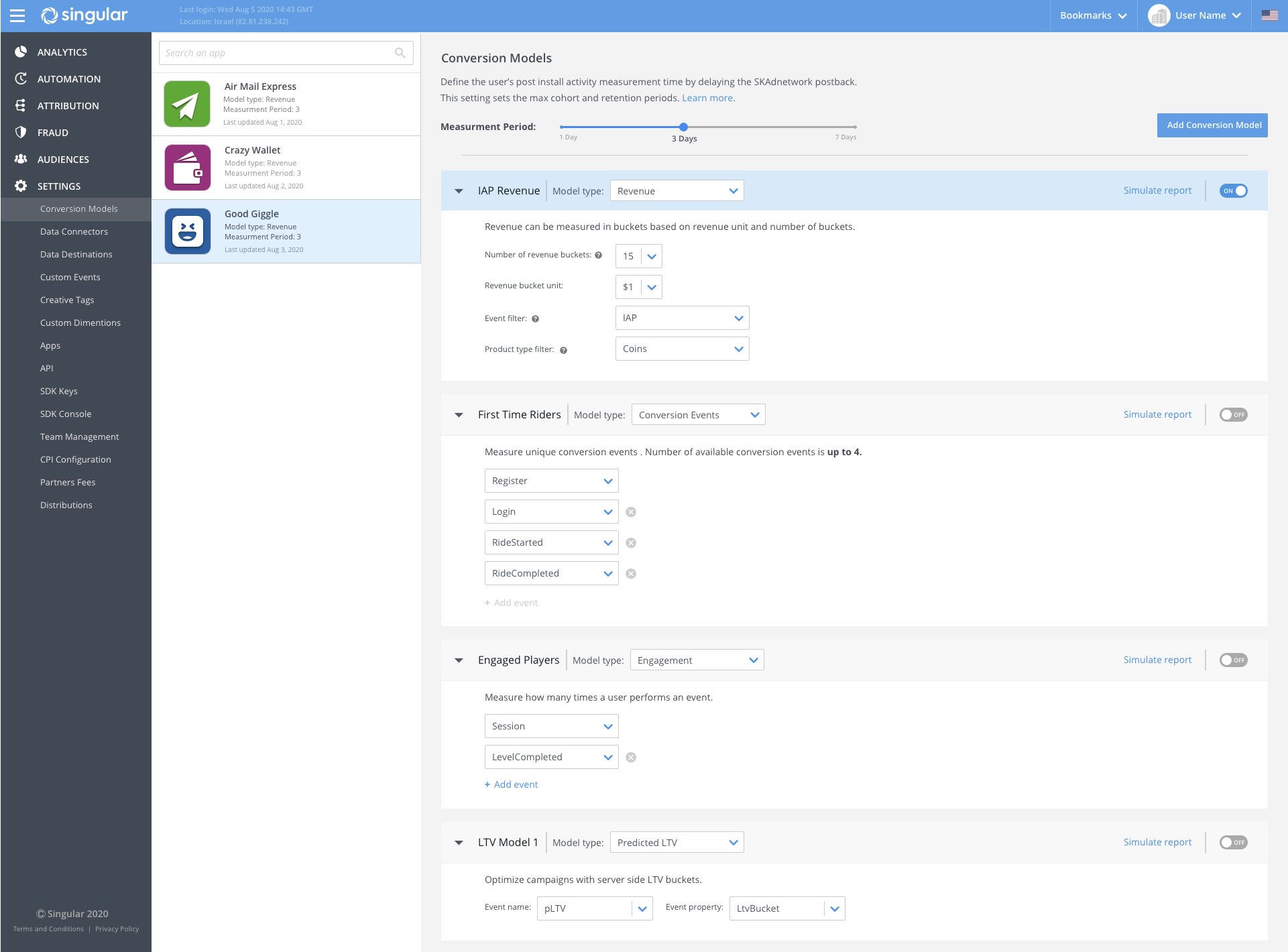 Finally, let’s talk about analytics. By design, SKAdNetwork data is highly fragmented. We’ve solved a very similar problem for ad spend and ad network data, so these challenges are quite familiar. Then there’s also conversions – you’ll need to translate values to meaningful event information, as well as tie it all back to the right campaigns.

As you may recall, the fields available in the SKAdNetwork response are the following:

Leveraging Singular’s Data Connectors, we can connect this data to campaign names, app names (for the publishing app), bids, and other metadata at the campaign and publisher level and of course — ad spend. Tying this together with 3-day, 5-day, or even 7-day cohorts can produce a powerful report that continues to enable user acquisition teams to make informed decisions about their ad spend.

Of course, there will be trade-offs and limitations depending on the different models selected, but at the same time, there are also further opportunities for improvement which we’ll touch on soon.

This notion of selecting your model beforehand (since it needs to be managed by the device) is somewhat new, and there will definitely be a lot of learning required. We are excited to see what advertisers come up with and look forward to working with you to build the technology to facilitate it.

Given that this is such a new technology, we anticipate that many advertisers will not really know what will work best and will want to test to find out. That’s why we came up with a solution for parallel model testing

With this tool, we can test and calibrate a variety of conversion models with existing data collected outside of SKAdNetwork. In fact, we’re even doing this today to test our models’ accuracy! This is super cool and will allow marketers to better understand what models can work best for them without sacrificing data integrity.

Singular’s parallel testing is not a solution that splits your devices between models. We’ve seen this around, and although it’s interesting, the concern is that with the privacy thresholds that Apple is introducing, resulting user segments will be too small, which will hurt the reliability of the data.

Where do we go next?

The solutions presented here are the result of hard work before and after the WWDC20 announcement, and there’s a lot more that is still needed by everyone – advertisers, ad networks, and MMPs alike.

In the upcoming weeks, we’ll work with you — our customers and partners — to bring these solutions to production. We’re happy to hear your ideas and suggestions about further enhancements we can add.

Lastly, but most importantly, no one party can solve this on their own. We invite marketers, app developers, MMPs, ad networks, and any other individuals interested in mobile app privacy to join the Mobile Attribution Privacy (MAP) coalition Slack group to learn, debate, iterate and collaborate to chart the course towards better measurement solutions.