Since we announced our first-to-market support for SKAdNetwork and released our open-source code for its implementation, we’ve been collaborating with many advertisers, publishers, ad networks, and MMPs to integrate SKAdNetwork and start testing it.

We’ve received many questions and ideas in our Mobile Attribution Privacy (MAP) slack group, but one of the most common questions that I’ve personally been getting is how to test the framework and see actual postbacks from it – a task that many have been struggling with. Some have even started to suspect if it’s even working at all yet…

We can assure you that SKAdNetwork indeed works, and we’ve seen the live postbacks signed by Apple before our very eyes. And although it may be challenging to figure out initially, it’s definitely possible once you understand the details. So we wanted to share those tips to help you expedite the SKAdNetwork adoption and push the industry forward.

Important note:
If you’re an advertiser and a Singular client, then you don’t have to worry about any of this – we’ve got you covered. You simply need to upgrade to our latest SDK that we released as part of Singular’s SKAdNetwork solution, and we’ll make sure that SKAdNetwork works behind the scenes.

To start, here’s a quick recap of the documented steps to get a postback in iOS 14, as summarized by Apple here:

The problem starts when you don’t get the postback – you click the ad, download the app and launch it, wait for the timer to expire… and nothing. No error logs, no debugging tools, no way to know what went wrong. Try to repeat that process a few more times and it may drive you crazy.

But after running it again and again and using some intensive research tools, we’ve figured out all the necessary steps and summarized them all in the following definitive guide for how to get a live SKAdNetwork postback.

How to get a live SKAdNetwork postback

You need two endpoints to run an end-to-end test with SKAdNetwork:

The critical piece to note here is the Ad Server endpoint – your implementation should follow Apple’s steps for generating your signature very carefully because any small mistake or compatibility issue will cause the postback not to send.

A good practice here is to simulate how Apple would validate your signature – you can log the ad details just before displaying them, reconstruct the message, and validate its signature using your public key. We’ve noticed that when the generated signature was compatible with OpenSSL (by running the command-line below), that’s when we’ve passed that step successfully:

Step 2: Get a live Advertiser app in the App Store

This is probably intuitive since you have to provide an AppStore ID of a specific advertised app when calling loadProduct in the publisher app – you have to actually download the advertiser app from the production App Store to get an attributed postback.

Step 3: Get a live Publisher app

You can use a dev-signed Publisher app to test SKAdNetwork (loaded with Xcode to the device or distributed via TestFlight), and it doesn’t have to be live in the App Store to simulate a live postback.

Step 4: Get a physical device with the test profile

You will need a physical device to test SKAdNetwork since the iOS simulator doesn’t have access to the App Store.

Apple has released an SKAdNetwork Profile that you can install on your test device to reduce the postback timers from 24-48 hours to 5-10 minutes. This is very useful for debugging purposes. You can download it from your Apple developer account here: 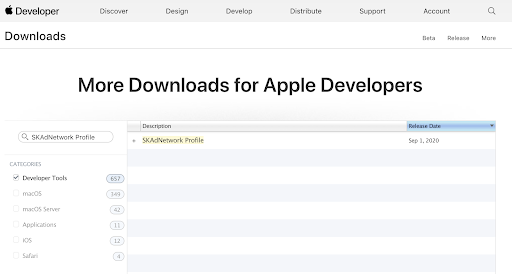 Now, an important point worth highlighting is that SKAdNetwork has been supported since iOS 11.3, but support for redownloads has only been added in iOS 14 in Version 2.0. So if you’re testing a device with iOS 13, the postback will only be sent following the first install of the advertiser app.

To summarize, here are some troubleshooting tips that may be useful to save you some debugging time:

Any questions or other recommendations? Send us feedback in our MAP Slack group, and we’ll update this post with new learnings!

Looks a bit daunting? Don’t worry! If you’re an advertiser, then it’s our job as an MMP to provide you a full solution using a simple SDK upgrade. Click here to schedule a call with our product team.

And if you’re an ad network, check our latest post on how to support the Secure SKAdNetwork solution with almost no effort!