Earlier this week Singular announced a new product: benchmarks. Never one to let an opportunity go to waste, I quickly started digging into the new feature for interesting observations. Which ad networks, for instance, are growing the fastest in 2021? Are there ad networks that are hidden gems that marketers should experiment with? And what’s happening recently with CPIs, CTRs, and CPMs?

The new Singular benchmarks product gives mobile marketers insight into the macrotrends in their space as well as the specifics: what ad networks are growing, where spend is being directed, and where most of the industries’ app installs are happening. (And FYI: most spend and most installs are only loosely correlated. Some platforms that claim bigger numbers of installs capture lower percentages of spend.)

Marketers can also compare their ad spend with the industry at large, generating insights about how their spend follows or differs from their counterparts in other companies.

One of the things I wanted to look at: top growing ad networks.

The top market share gaining ad networks for this year is a critical measure, because we’re at a unique juncture in mobile marketing. We are quite literally in probably the greatest period of upheaval in mobile marketing in a decade. We knew iOS 14.5 was a big deal, and we knew losing the IDFA was going to be a problem.

But I’m not sure we really viscerally understood how much of a disturbance in the force it was going to be.

As we shared last week, dollars are leaving iOS for Android, where (now) too much spend is chasing too few users, resulting in rising CPIs, declining ROI, and an increase in paid user acquisition supplanting organic growth.

So it’s a crazy market, which makes it all the more impressive when many of the top ad networks can continue to grow.

The top gainers as of July 2021 include:

And just to be clear, this is out of all potential media partners: SANs included. 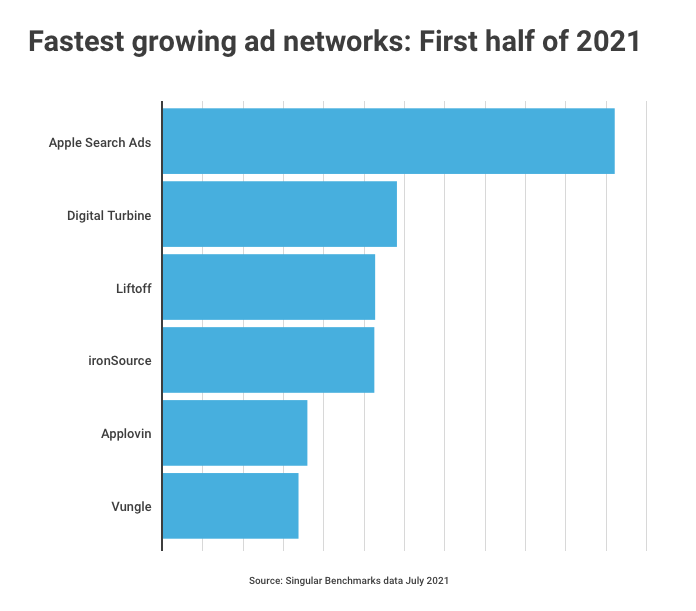 Not only did Apple release a new ad placement at the top of search results in May, ASA has access to first-party on-platform Apple data for ad targeting — including but not limited to keywords and search data — that others simply don’t have. And Apple Search Ads has always been high quality and effective: it is, after all, right at the point of user decision and action.

So it was natural that ASA would grow post-iOS 14.5 and SKAdNetwork.

The other ad networks are interesting. Most of the big gainers have one thing in common: they were early adopters of SKAdNetwork technology. They leaned hard into the new methodology for deterministic advertising attribution on the iOS platform, prepared early, adjusted quickly as Apple changed timetables and added capabilities, and were the most prepared.

As I was looking at the benchmarks, a few things became apparent. The early winners of the upheaval, sure. But also some hidden gems that marketers should consider for additional spend.

Look: in all the change that is hitting mobile marketing right now, mobile growth specialists are throwing budgets around like crazy. There’s always been a percentage of top mobile user acquisition specialists that is reserved for experimentation and testing, but that’s grown significantly in the past few months. In fact, in our recent webinar 5 Ways to Drive Faster Growth for Gaming Apps, one growth leader suggested that while traditionally mobile marketers have reserved a small portion of their budgets for experimentation … now the entire budget is experimentation.

But here are a couple of opportunities to think about:

Neither grew a huge amount in the early part of 2021, at least for Singular clients, but they’re both well-positioned to absorb new growth demand. As we mentioned earlier, money is moving to Android right now. Both of these players target Android … but they’re different than most ad networks. Each is an interesting and unique play on mobile user acquisition.

Where Bluestacks offers a desktop-based way to play Android games and a new cloud-centric gaming platform, Mistplay presents a loyalty program for mobile gamers: discover new games and earn rewards. Both are differentiated offerings, both ranked well on our most recent Singular ROI Index, and both are, IMHO, worth a shot.

Especially if you’re spraying your entire marketing budget around experimentally.

I’m not going to share those in detail here, except for a few highlights. One reason: the benchmarking tool looks just enough at the past that not all of the recent industry changes — spend flowing to Android and bumping up costs there while depressing costs on iOS — are priced in yet.

But here’s a taste.

North America and Western Europe – Gaming
Outside of the biggest self-attributing networks, we’re seeing effective CPIs in the $2-4.50 range for mobile user acquisition costs on Android. The biggest SANs are in the $3-6 range.

Hyper-casual, however, is generally under $0.50 and as low as 4-8 cents on some significant platforms for Android. For iOS: add 50 cents to a dollar.

For iOS, while there’s still some chance of getting fairly cheap installs, costs spike higher, of course.

South Asia – Gaming
Some of the midsize ad networks offer outstanding values here with media eCPI in the single-digit pennies. And while the big SANs spike up to multiples of that, they also average out well under $1 per install for both Android and iOS.

The majority of the spend here, of course, is on Android.

And the future of mobile user acquisition on iOS?

We’ll update these insights in a month or two.

But a few things are already obvious about the flight from paid user acquisition activity from iOS to Android:

What that all means is that mobile games user acquisition specialists and mobile growth marketers can’t simply keep redirecting budget to Android in order to satisfy some arbitrary target or a random CEO demand for 35% growth this quarter. And that they’re going to have to invest the time, energy, and experimentation budget to figure out mobile growth in the new world of privacy-safe iOS.

So we should see budgets swing back to iOS.

And in fact the smart money already has.

One of the participants on our recent 5 Ways to Drive Faster Growth for Gaming Apps webinar just told us that since CPIs are down on iOS, there’s a one-time buying opportunity there that he’s not passing up. Installs are currently on sale, discounted, for iPhone and iPad. That kind of opportunity doesn’t generally last long.

The early bird gets the worm, so don’t delay.

Of course, just maybe … the second mouse gets the cheese.

There’s one surefire way to get more insights: chat with Singular, book a demo, and see what Singular can offer. Here’s how to get started …