Our economy in apps: Tracking coronavirus impact from January to the future

Whoever invented the backhanded curse “may you live in interesting times” must have seen the year 2020 coming. As I write this on June 1, protests over the terrible death of George Floyd in the United States have been raging for a week and questions of equity and justice, and Rodney King’s “can’t we all just get along” are on the front burner. All the while, global health is still very much an issue.

As we’ve been doing here for months now, I want to trace and track what coronavirus has been doing to both global and local communities.

What we’ve seen so far:

As we’ve looked at the hard data, we’ve gotten advice from 250 CMOs and marketing leaders on what to do now, and we’ve looked at 7 massive reasons why, especially now, you need to monitor marketing ROI maniacally.

So now I want to take a larger view. I want to look at 2020 in apps and mobile and see what the big trends over the last five months reveal, using a data sample size of about 2.5 billion app installs. And then we’ll do something new: we’re going to pull out our crystal ball and attempt some predictions for where things will go in the near future.

We lost the dip

Traditionally over the last three years, there’s been a New Year dip in app install activity. January has still been relatively high with the Christmas and New Year’s hangover, but February has typically dropped significantly. 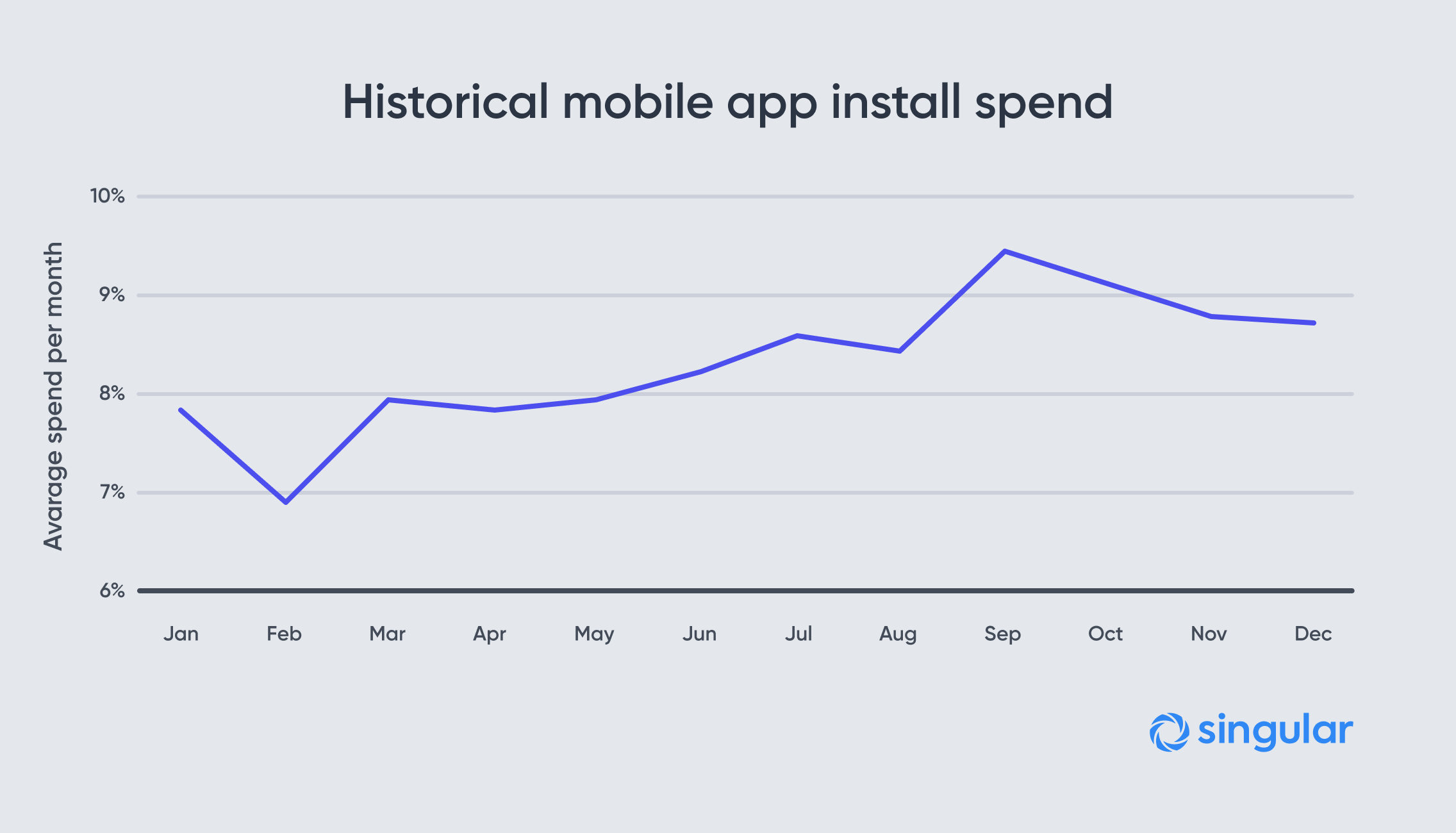 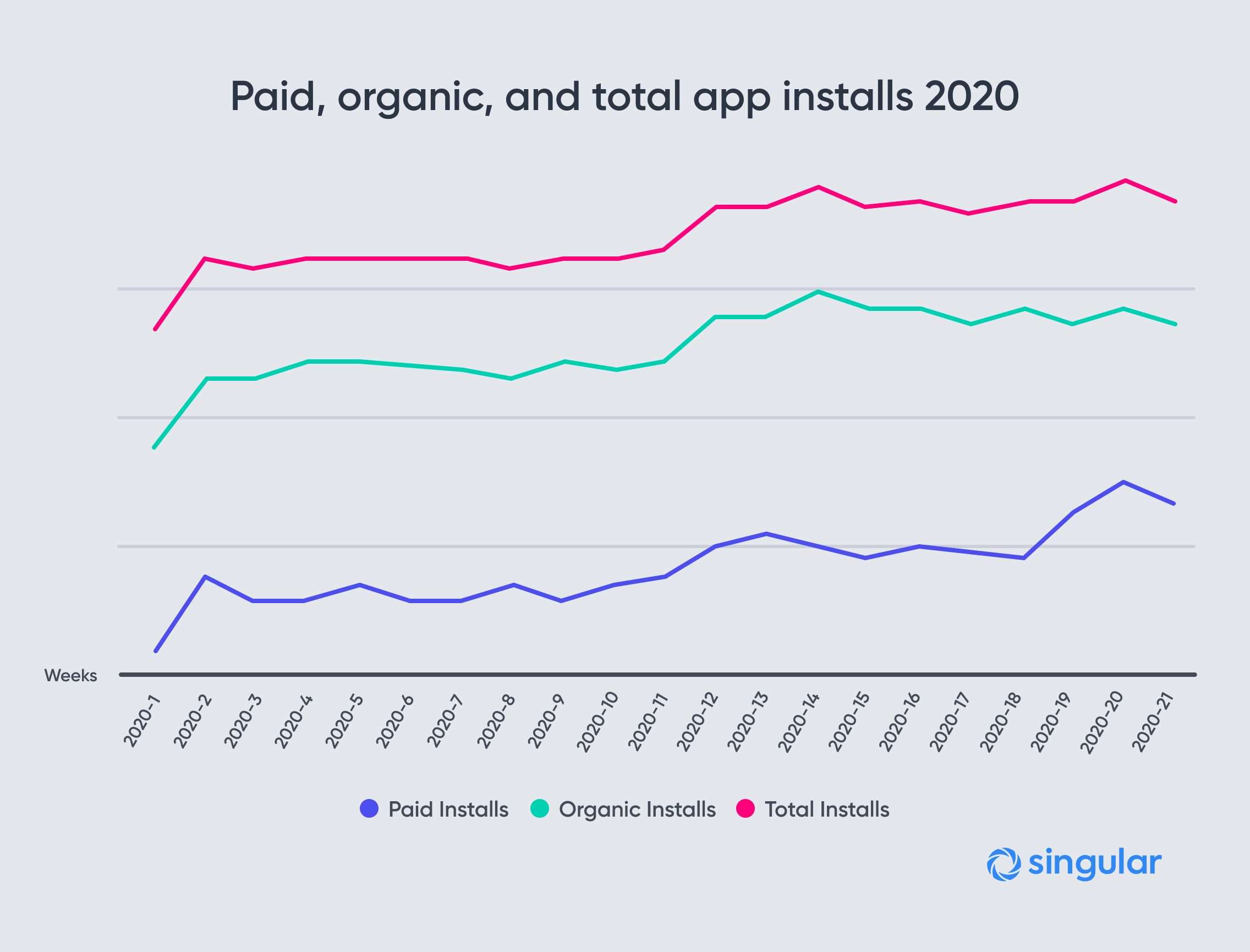 Betting is back, baby

Sports or no sports, betting is back.

There was a Super Bowl spike in February, and then a massive drop due to sports cancellations. There was another spike in March — probably in anticipation of March Madness basketball action, which of course never ended up happening — and then growth in April and May even though there were no professional sports going on.

Apparently, bettors are more into betting than they are into sports. They’ve found new things to gamble on: weather, the stock market, eSports … and once-obscure sports from countries that haven’t shut down completely, like Ukrainian table tennis. 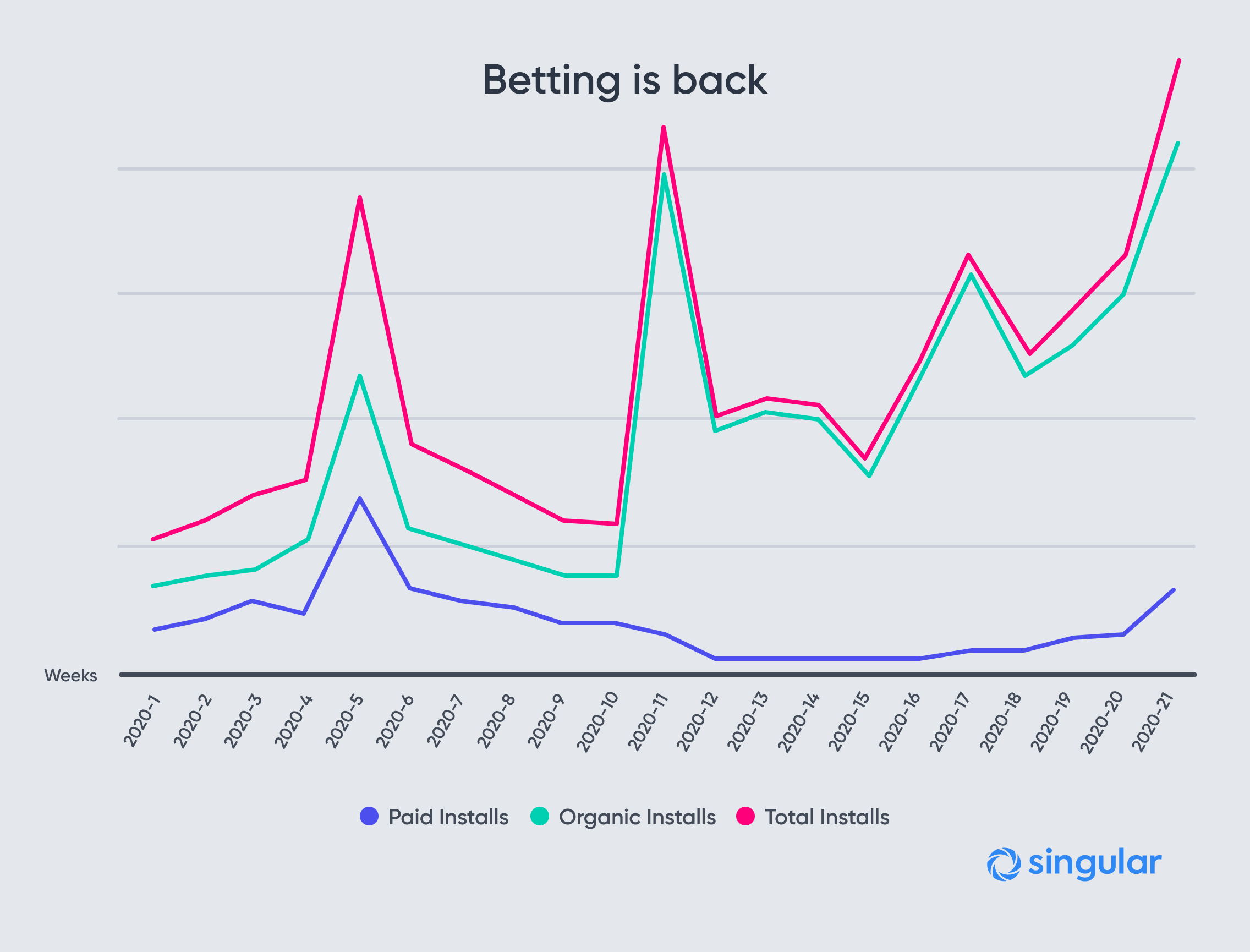 While gamblers seem to have been able to transfer their passion to new activities, sports fanatics simply have had nowhere to go. Sports news has just been happening for most of the last two months: 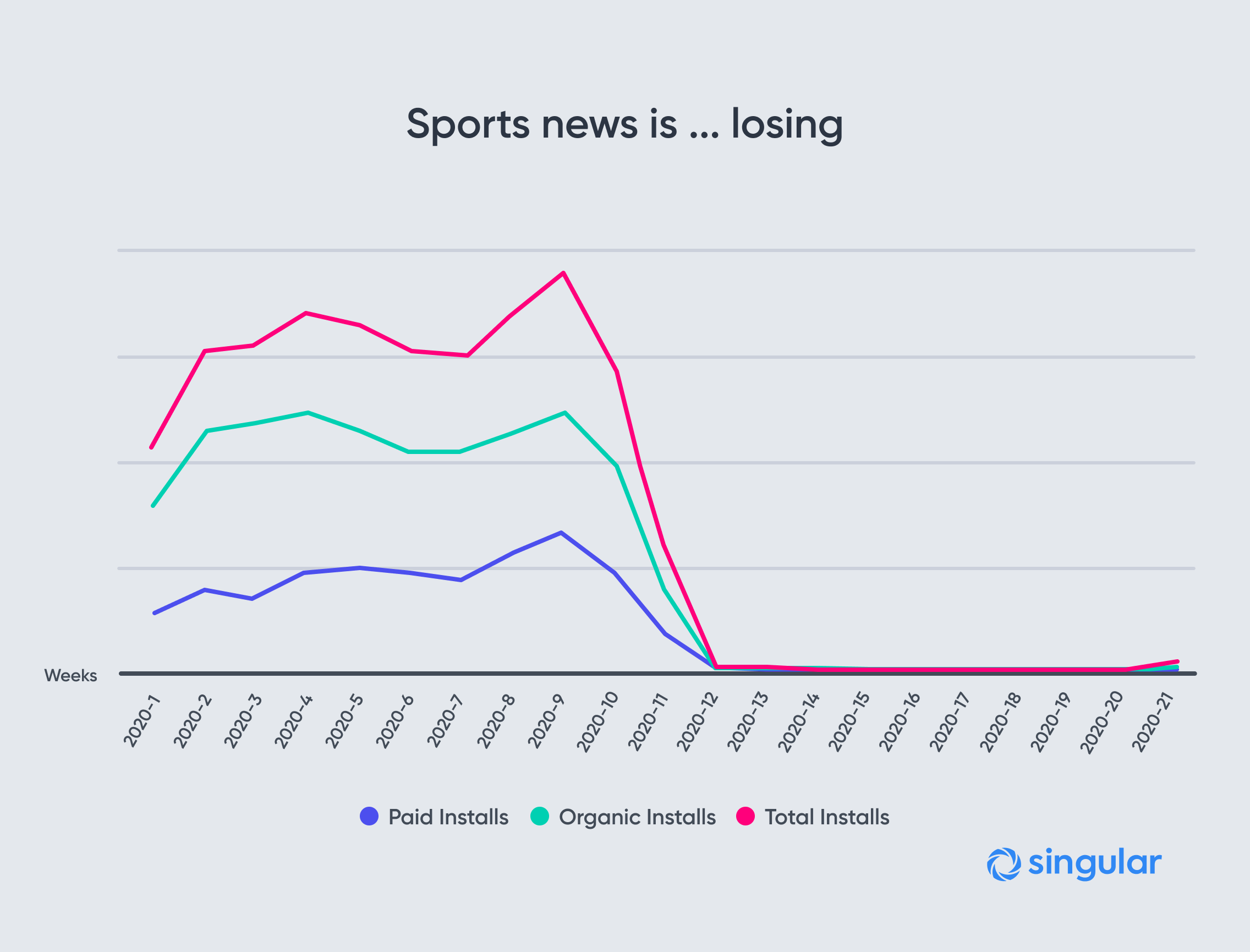 There is a ray of hope, however.

Sports news app installs are up 5X in the last week — and yes, that’s off of a very low base — probably thanks to rumors and early returns about sports reopening. The Bundesliga is playing soccer (football) again in Germany, the NHL has announced plans for how it will return when able, and the NFL has never backed off its intention to play its season on schedule.

When you’re hot, you’re hot. And organic installs are a wonderful thing, as the streaming entertainment industry is finding out. 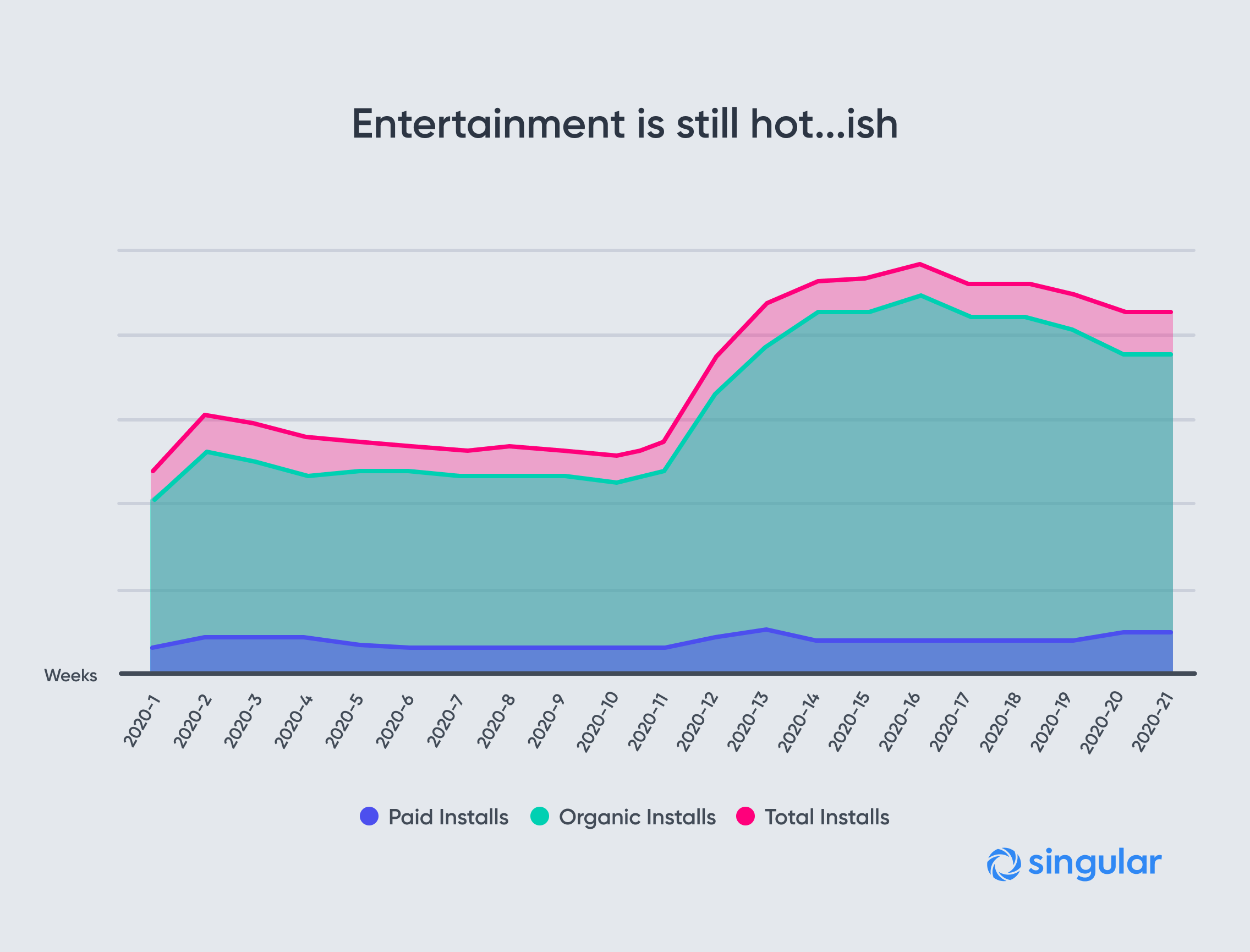 Streaming has cooled off just a little in the last few weeks, but the interesting thing is that streaming media app installs are still 88.34% organic. Paid acquisition has remained much at the same level all year so far, but the lockdown caused total installs to basically double.

Reopening will depress these numbers somewhat as people are able to resume their normal day-to-day activities. But those who didn’t finish binging The Office or are waiting to find out what happens at the end of Grey’s Anatomy might need to choose which streaming apps to stick with coming out of quarantine.

When all human life leaves the planet and nothing but cockroaches can survive, mobile games will still be here. Gaming is always huge on Google Play and the App Store, and the global pandemic just accelerated and increased that dominance. 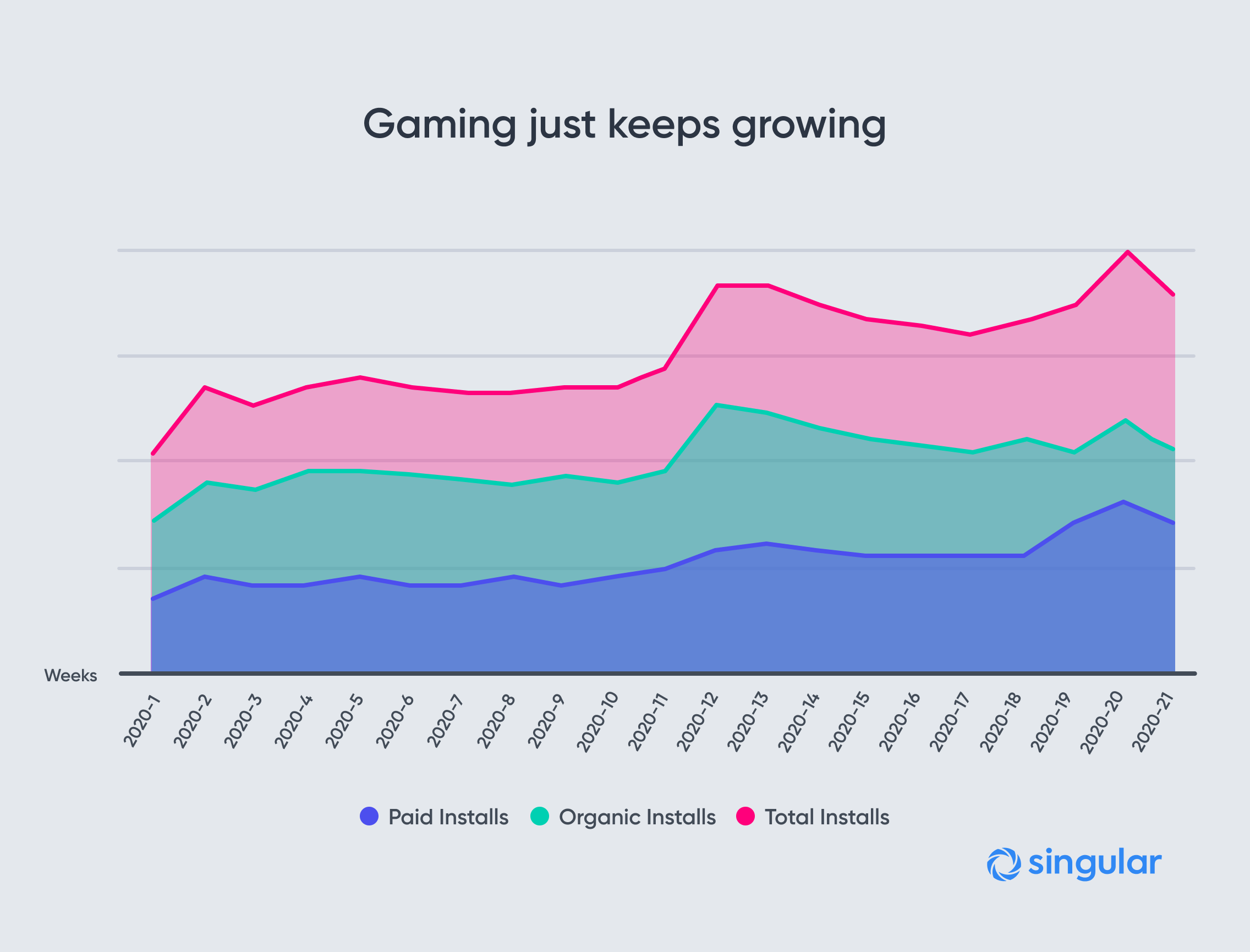 Even reopening isn’t stopping gaming, or even really slowing it down.

Health and fitness always spikes in the new year thanks to New Year resolutions. But after a dip in March, we realized that our gyms were not opening any time soon.

And that means that consumer health and fitness investments are back up to traditional January week one and two levels, which is (yes, here’s that word) unprecedented. Anyone who has recently tried to buy fitness equipment knows this from personal experience. 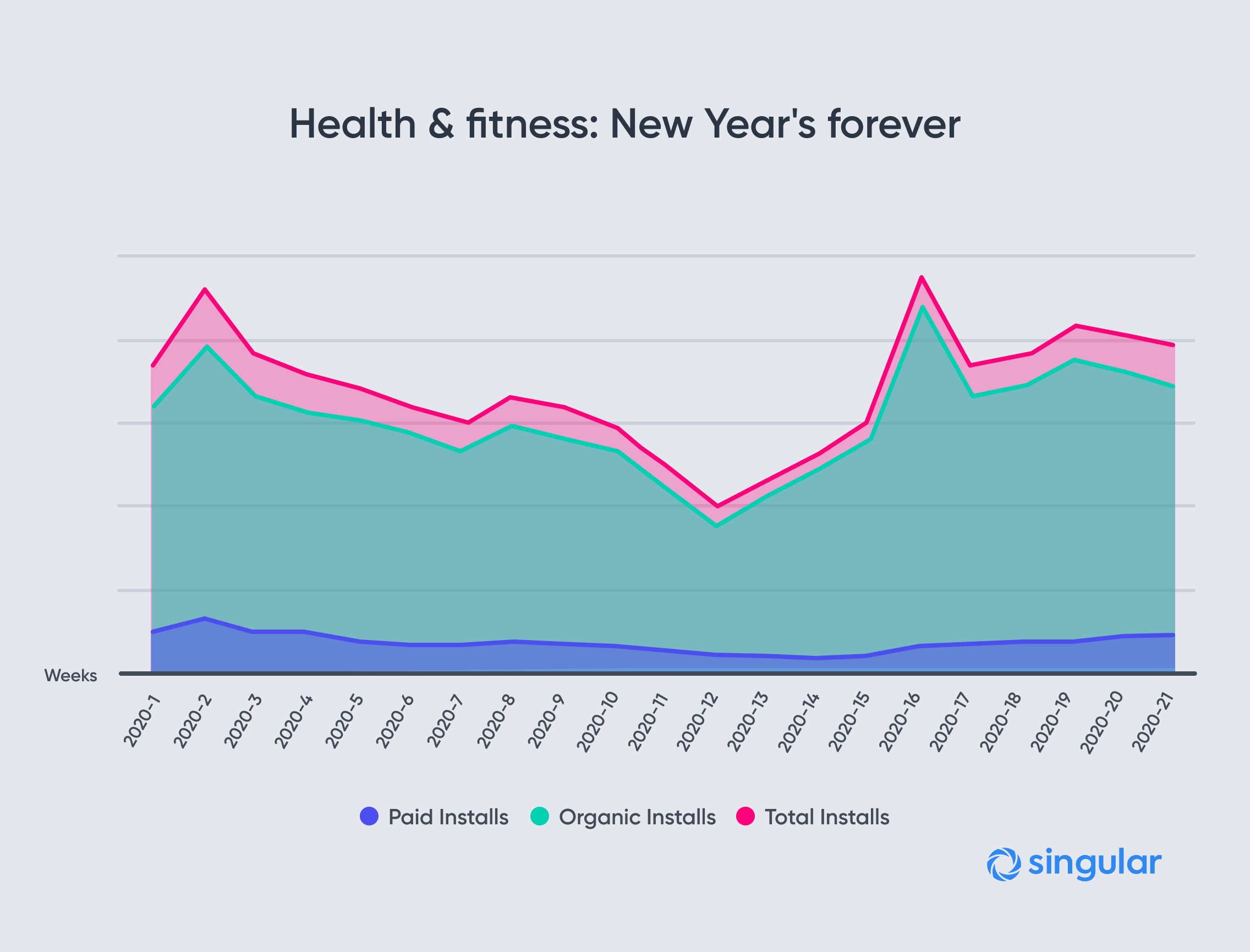 Imagine a Coronavirus world without Amazon or other retailers that are just a tap in an app away from delivering toilet paper, supplies, food, electronics, and more. It’s challenging, and consumers agree. Retail rose in March, spiked in April, and is still high in May. 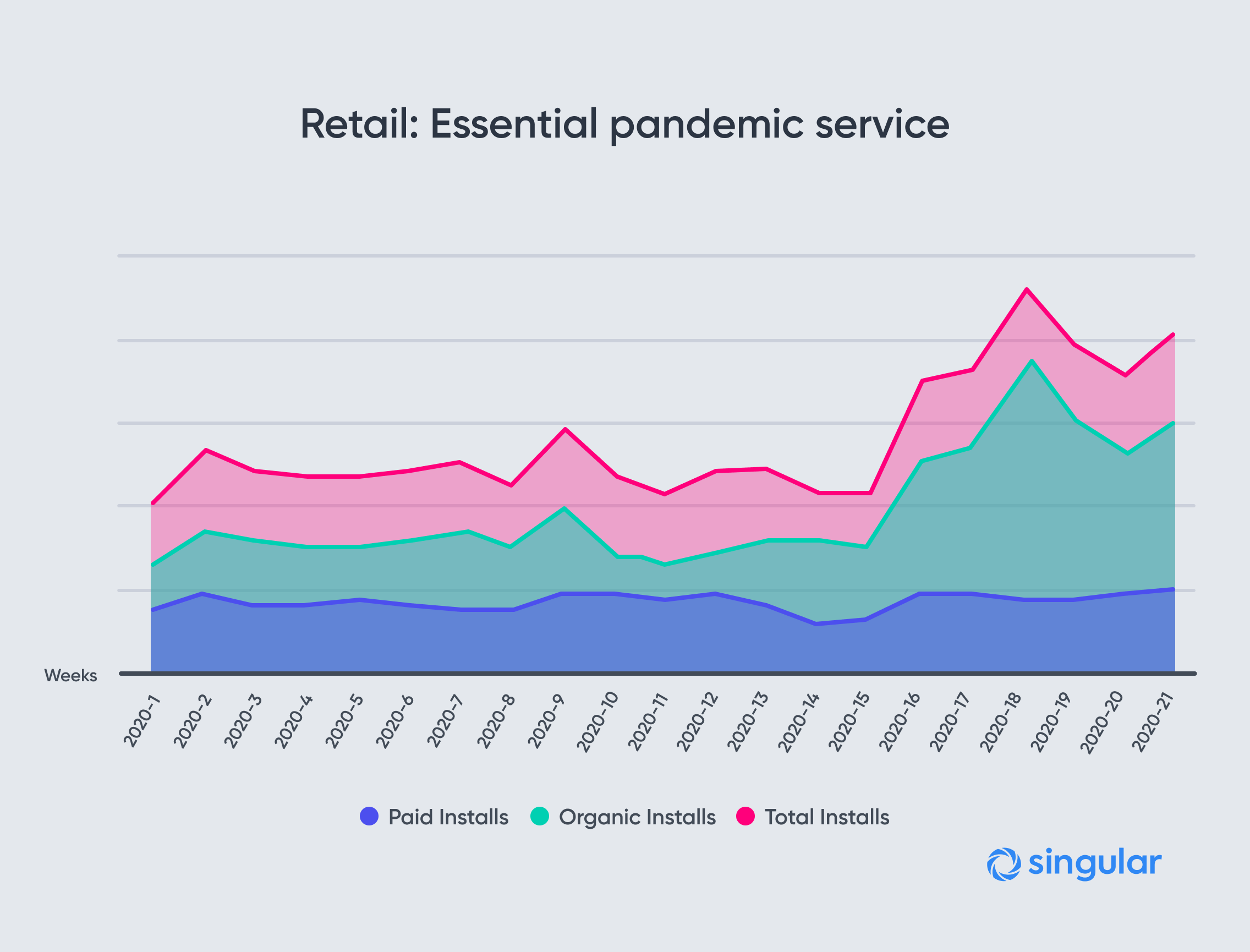 What about subscription boxes? Subscription retail is not quite as hot: seeing money drip away monthly for non-essentials is less appealing, likely, for people who aren’t certain about their financial futures. However, it’s still up.

Up and down: dating, social, travel, news

Social communication apps are still up. Dating apps saw a big surge in mid-March that has since cooled.

Travel remains a very challenging category to be in, of course. Travel apps and hotel apps are markedly still down, of course, though car rental has seen some interesting spikes at times. Travel search engines, interestingly, spiked in mid-March and, to a lesser extent, in mid May. Part of that is likely due to rescheduling and cancellations, but part of that is also due to reopening and a rush to go somewhere, anywhere.

In addition, with pricing yo-yoing all over the place, there are some fabulous deals on flexible travel that consumers opted to take a chance on.

And news, which spiked early in the year, slowed, then spiked again in March, is still high and is on an upward trend in May.

With lockdowns and reopening plus civil unrest and potential second and third waves of pandemic all happening at the same time, it’s challenging to predict the future.

But here are few thoughts on what is likely to impact the mobile, digital, and offline economics of the next three to six months:

Overall, life is going to continue to get more digital. That means opportunity for mobile players, but also challenges. And while a rising tide lifts all boats, a sinking ship drowns everyone. There’s a lot of hard work in the future for builders and marketers and publishers to grow, to pivot, to serve, and to prosper.

Just as importantly, there’s a lot of work to be done to bring everyone together so that all benefit from the rewards.