App uninstall rates and coronavirus: Lockdown is bad for retention

Apparently, consumers having a lot of time on their hands is bad for mobile app retention.

Just possibly, they’re using all that free time to Marie Kondo their smartphones. And, sad to say, if your app doesn’t spark joy … sparks fly.

But what about retention?

And what about app uninstall rates?

We recently pulled a 330 million install dataset stretching back to January 2019 to see where app uninstall rates have been trending over the past 16 months. And, of course, to see if the COVID-19 shutdown has had any impact on uninstall behavior. The short answer is: absolutely yes.

Looking at uninstalls: average rate is 36%

The average rate of uninstalls across all 16 months and all mobile operating systems is 36.4%. In other words, for every 100 times an app is installed, 36.4 uninstalls follow. 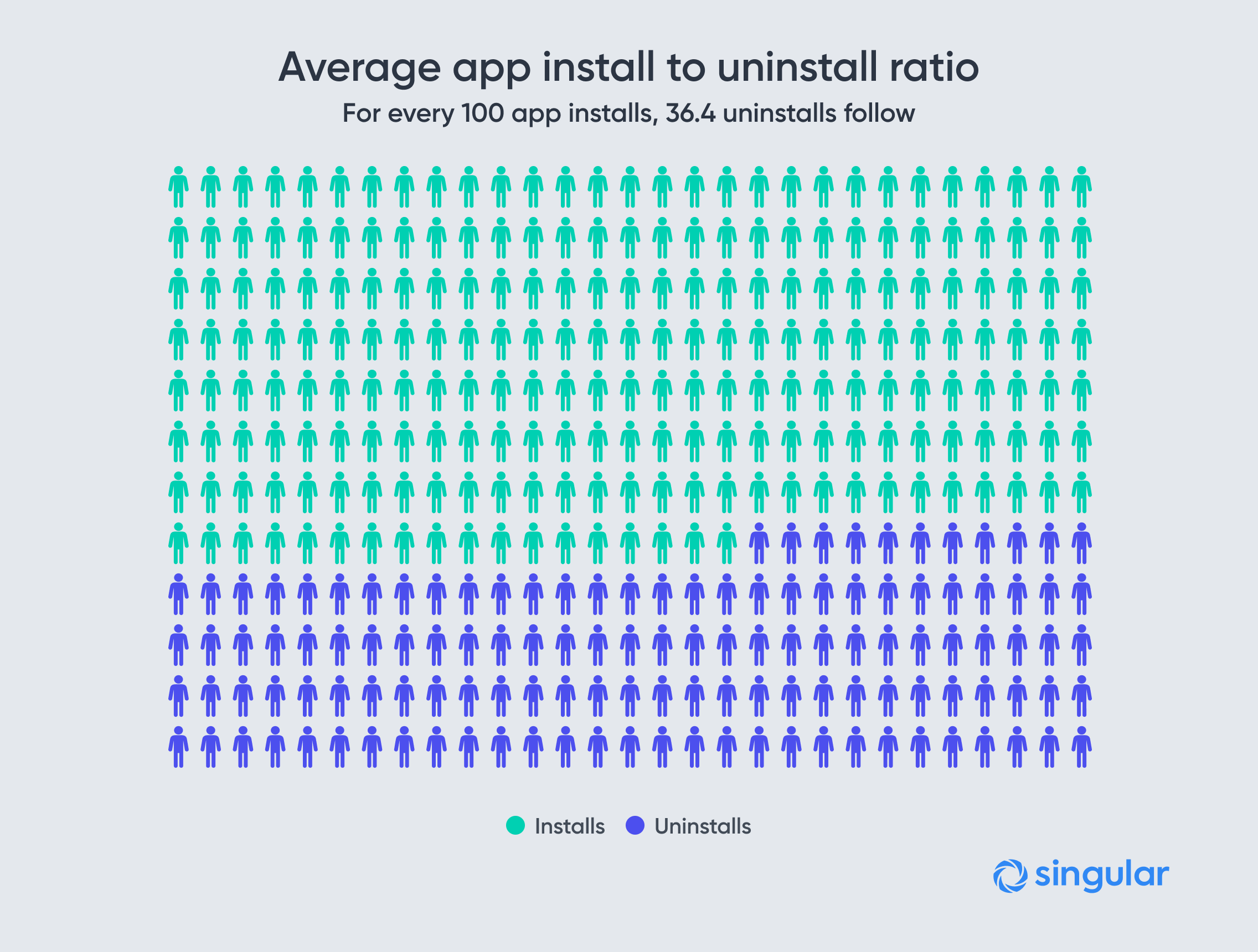 (Note that this chart can be somewhat misleading: the blue uninstalls were actually installs initially.)

Note that this doesn’t mean that retention is super-high, over 60%. It means that 36.4 times out of 100, people actually physically delete an app that they’ve installed, removing it from their phone. There’s a lot of app abandonment that doesn’t involve installs. After all, how many screens or folders full of apps do you have on your phone that you haven’t touched in months, if not years?

Personally, it’s probably something like 3-4 screens of app icons, plus a few folders.

In our dataset, a sample size of 330 million app installs, Android users uninstall apps significantly more than iOS users: at a rate 267% higher, in fact. 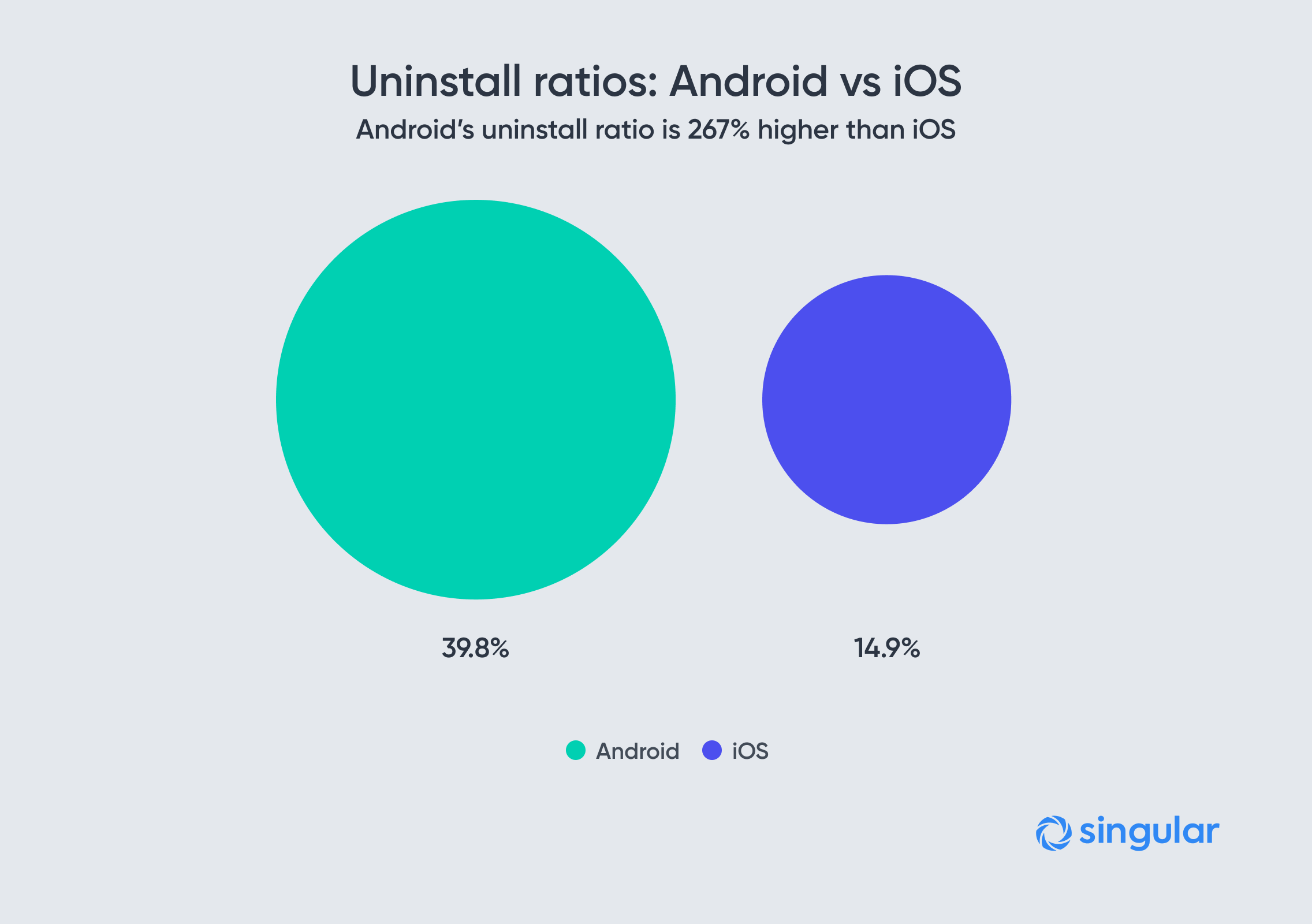 There are reasons to believe this data is biased due to geographical trends. This sample includes Singular customers in India, which are comprised of roughly 90% Android users. I’ll look at this again with a larger dataset in the future to see if this pattern holds for all regions.

The uninstall rate jumped significantly in 2020 compared to 2019. 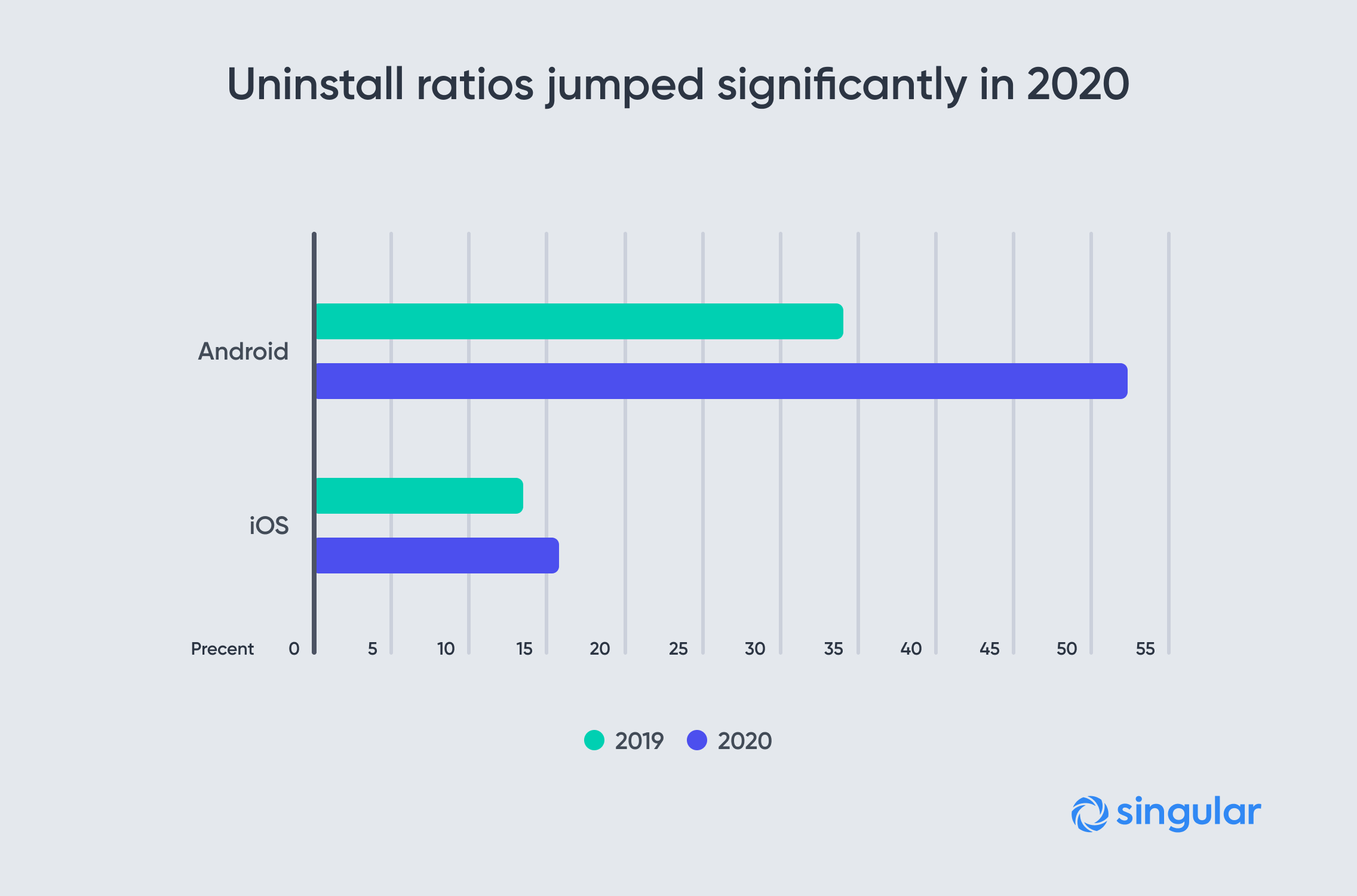 On iOS the change was less significant. The 2019 number was 13.38% while the 2020 number bumped up just slightly to 16.1%. Again, both numbers are for the first four months of the year only.

It would be hard to say that all of this change can be attributed to coronavirus, because some of it happened in January before any shutdowns had taken place in the Western hemisphere. Even in China, shutdowns only started in the second half of the month. 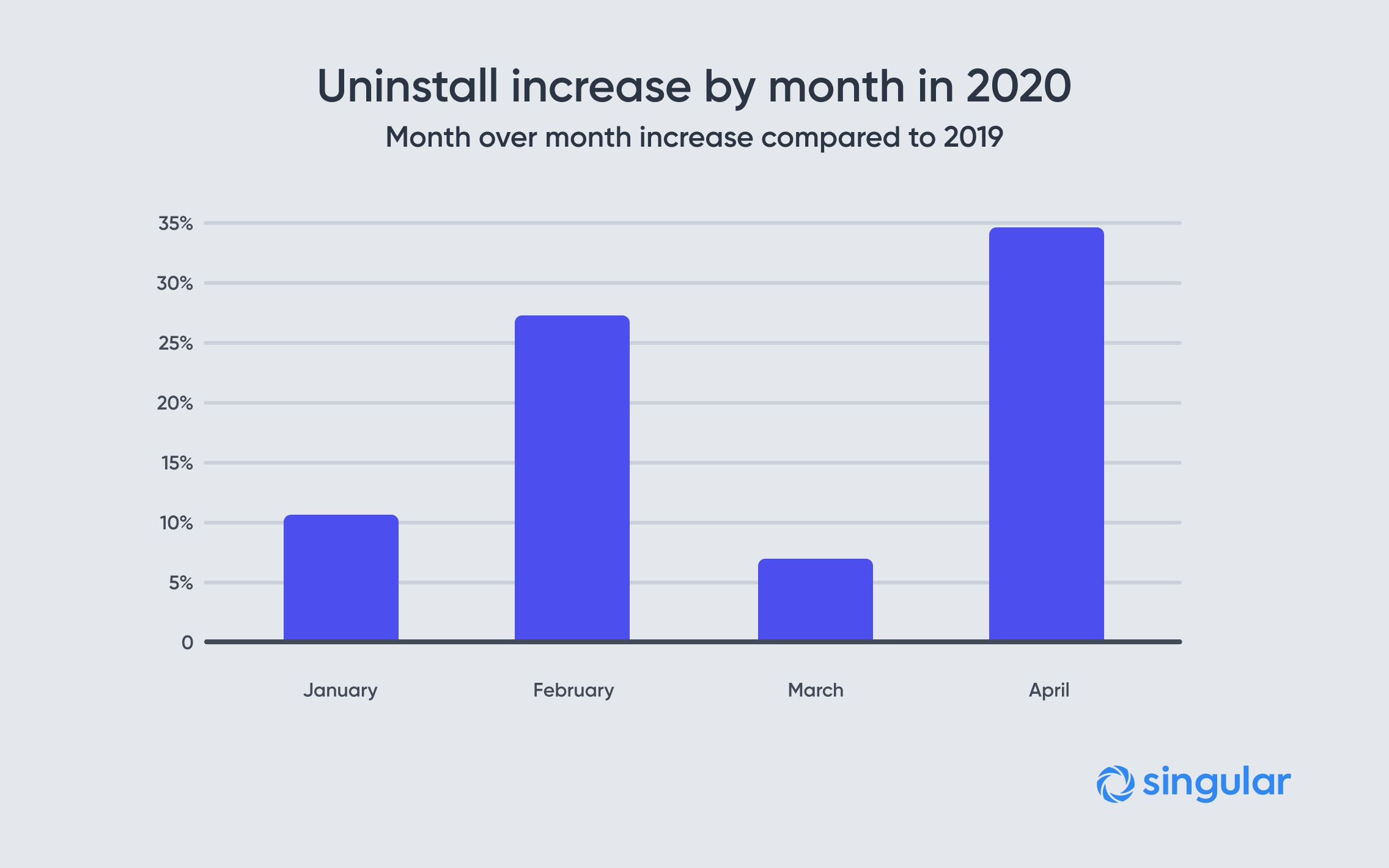 But, despite the fact that what we’re seeing here is correlation, not necessarily causation, it’s clear that in 2020 there’s been an increase in app uninstalls. That started slowly, at just under 11% in January, soared in February to almost 27% higher than the previous year, dipped in March, and absolutely blew the barn doors off in April, at an almost 35% increase.

Note that all these numbers are percentage growth over the same-month numbers in 2019.

It’s challenging to understand exactly what’s going on in March — why the dip? — but the overall trend is clear: significant growth in uninstalls during times of coronavirus shutdowns, lockdowns, and quarantines.

It’s important to remember that installs were up too, as I mentioned off the top. Potentially what’s going on here is a lot of trials and testing: installing an app just because, and deleting it when you’re finished with it.

That’s what mobile expert Eric Seufert thinks. There’s a ton of “app tourism” going on during the coronavirus shutdown, he told me via Slack. In addition, he added, retention and monetization curves look radically different in coronavirus times than they do in previous months.

Here’s the harsh reality for marketers:

Ultimately, your best protection in these uncertain times is to have access to real-time data that informs real-time decisions, so you can adjust your strategy to fit the needs of a volatile market. To learn more about how Singular can help you run optimized marketing campaigns, request a demo!