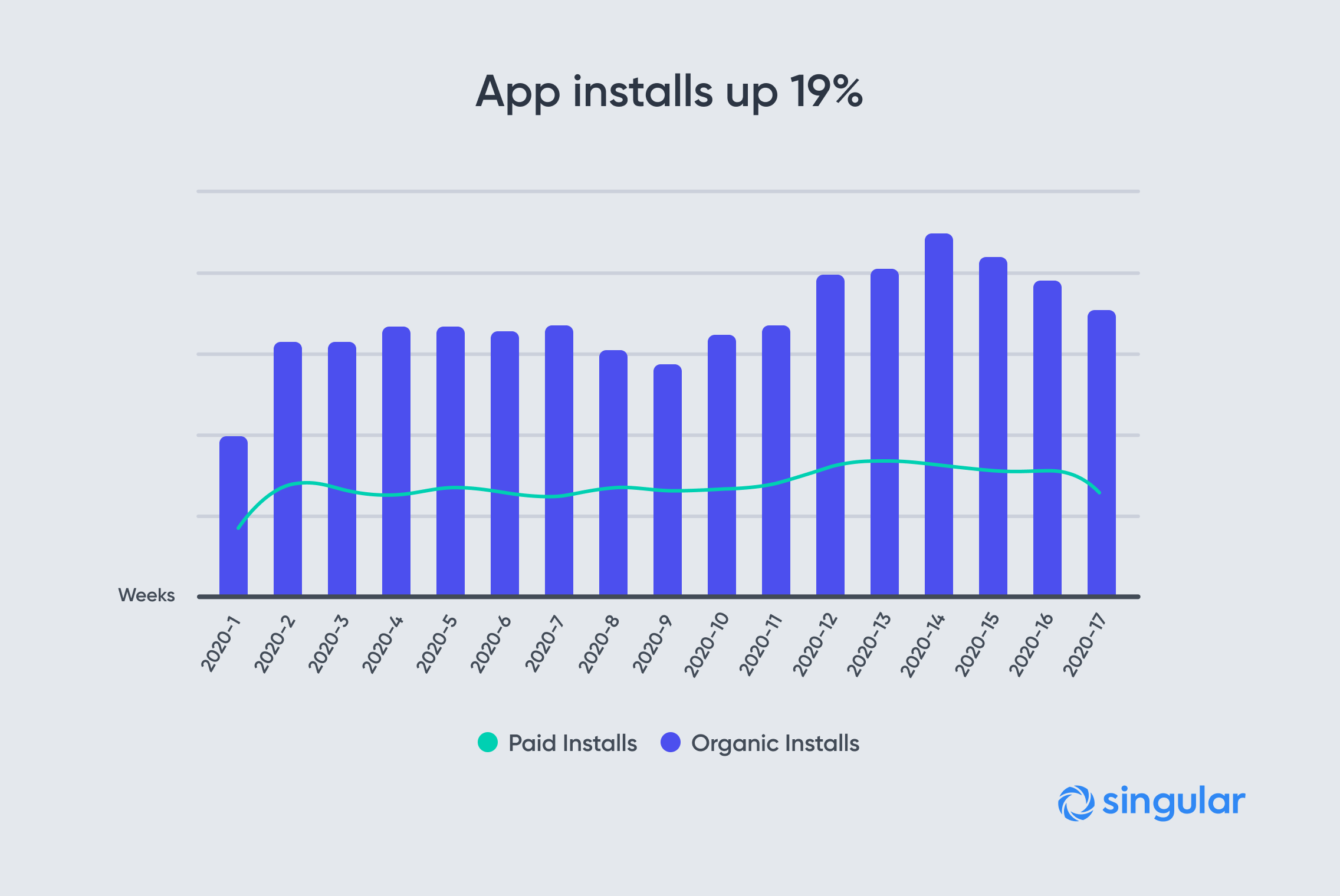 It’s been two months since the novel coronavirus was declared a global pandemic, and we’re still coping with a lot of hardship and uncertainty. A third of the world is still under some form of stay-at-home.

Not surprisingly, this pandemic is changing how we spend our time and money as well as what we’re doing with our mobile phones. Game publishers in China saw record revenue during the worst parts of its lockdown. Retail mobile apps jumped 34% in March.

And organic app installs were way up globally in April.

We’re now past the initial stages of alarm and shutdown, which saw games and news jump the most in-app installs. Most of us are still at various levels of quarantine, but we’re starting to begin the process of defining a new normal and going through a challenging societal debate on when and how to re-open society and re-engage the economy.

We analyzed a massive sample of almost a billion app installs to find out.

Business services are still up significantly. Entertainment is still up. Clearly, people have found things other than live sports to bet on, because betting is way up. Communication and social apps are still going up, as people are feeding their need for human engagement. And while dating is slowing down a little, it must still be monetizing, as paid installs are significantly up.

What spiked earlier and is now settling down?

Categories like gaming and news are still hot but have subsided from their massive spikes. Financial services have cooled a little: we’ve gotten our banking apps and insurance apps. And we’ve downloaded our investment apps to see how much we’ve lost due to the stock market collapses.

On-demand apps, like those for the delivery of food, are cooling as well. If you needed DoorDash or Instacart or Uber Eats, you got it a few weeks ago. And while retail is still up, retail subscriptions have cooled: we might be worried about jobs or layoffs, and whether we’ll be able to afford those ongoing subscriptions in the future.

Let’s look at each of the categories that are growing

Business services
Both paid and organic installs are up almost continuously over the last four to six weeks.

Those who can work at home are working at home, and they’re finding that when you spend more than a few days doing it, you need all the right tools to work with others and support your business or your job. 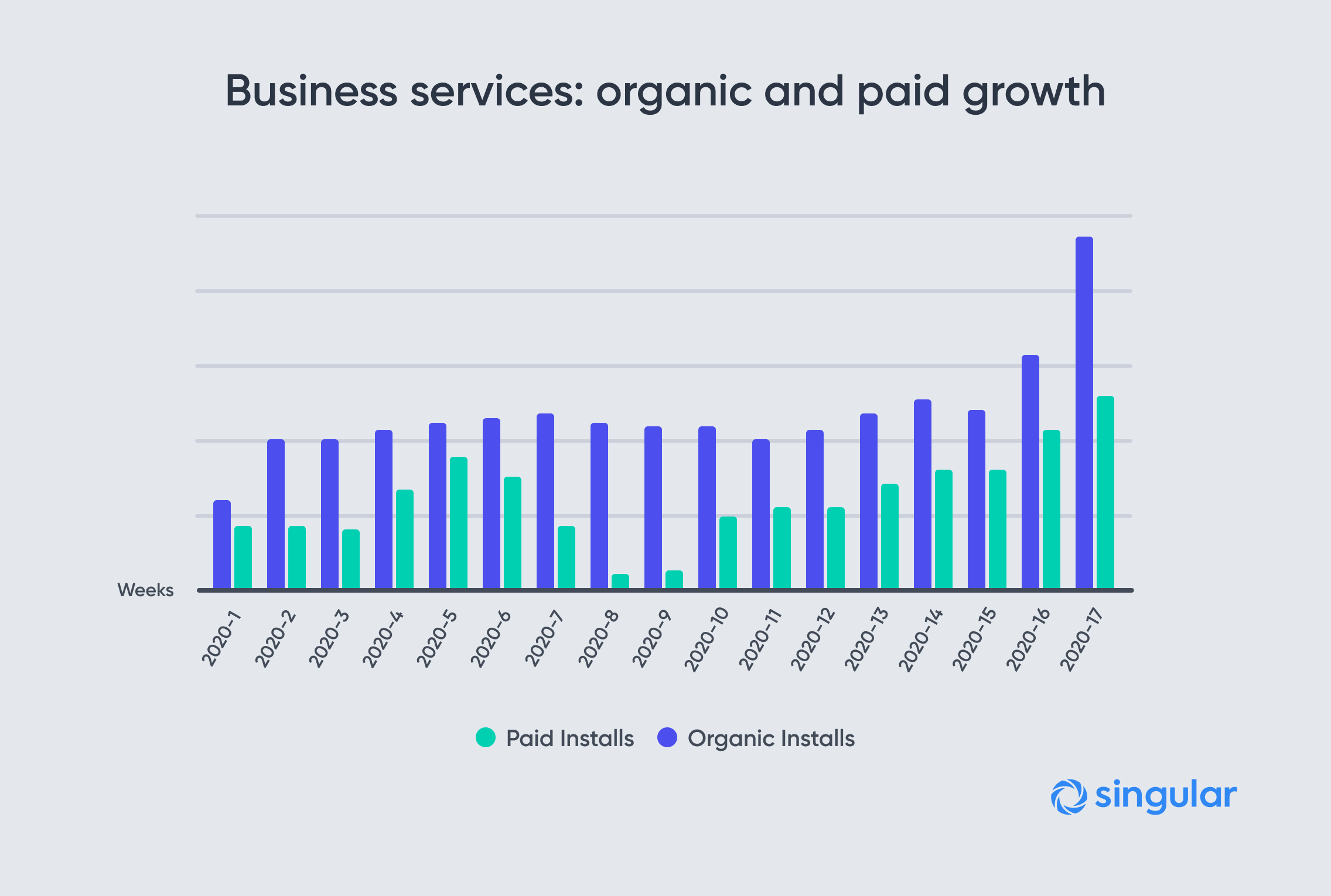 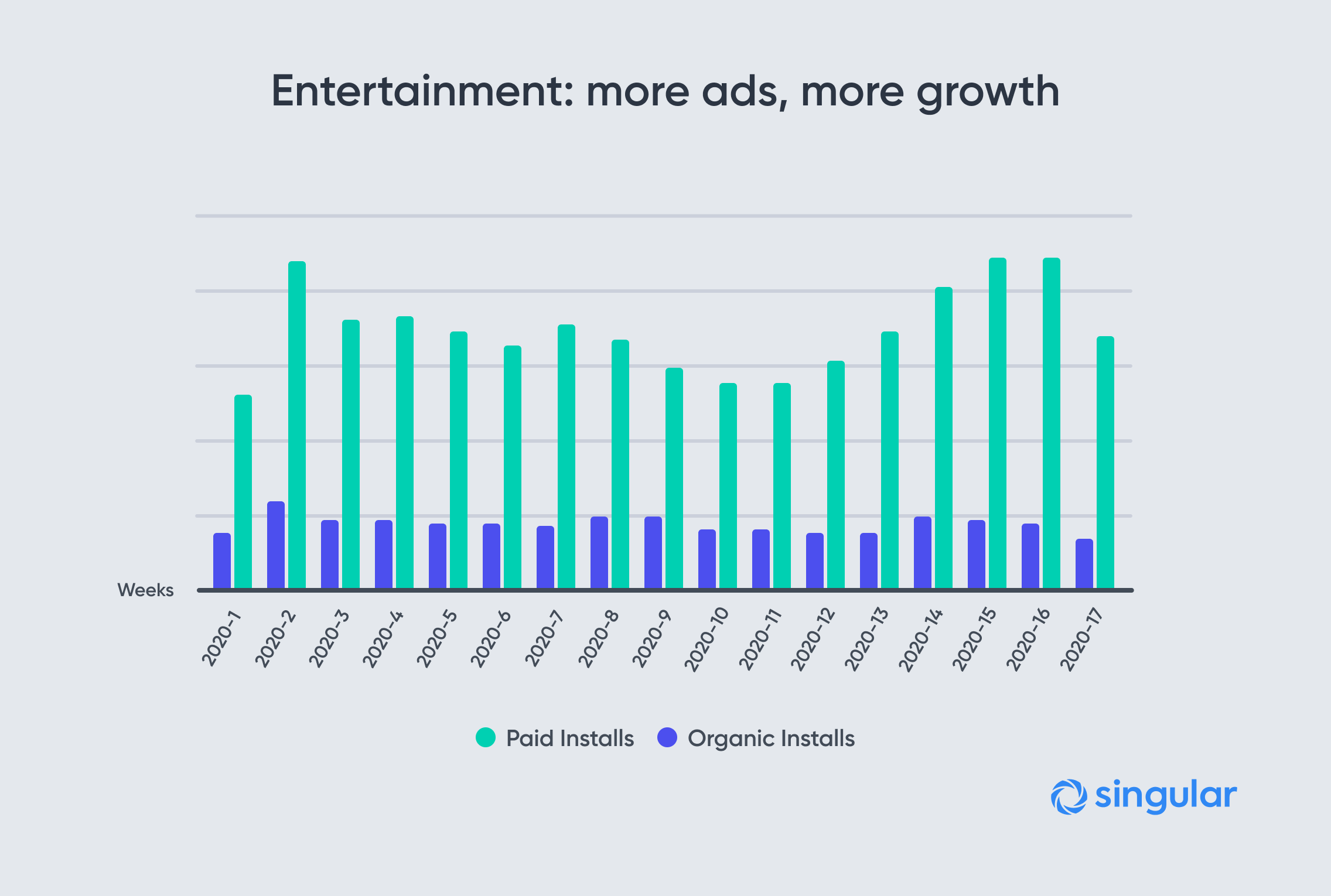 Betting
Organic install behavior in the betting category is off the charts in recent weeks. Interestingly, it’s happening at the same time as paid user acquisition is dropping off. You’d assume some of that post Super Bowl, but the trend has continued.

What are people betting on without live sports?

Virtual horse races, maximum daily temperatures, contestant results in the TV show Survivors, and just about anything else you can think of. Including, until official word was released, where Tom Brady would end up signing. 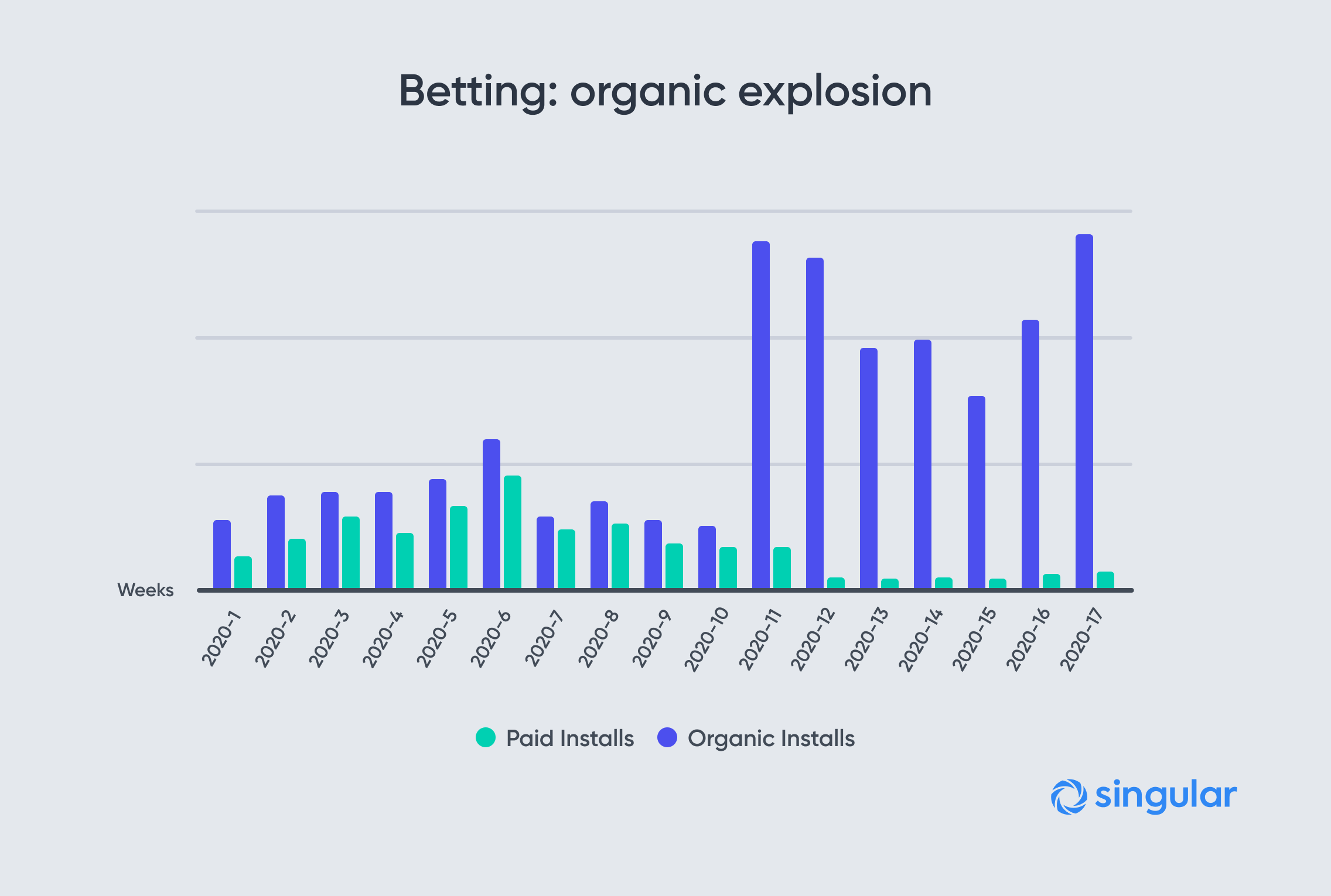 Streaming
Huge growth in organic installs in the streaming industry have continued throughout the month of April.

Netflix has been a massive beneficiary, but so has Amazon and its subsidiary Twitch, where streaming is up significantly since lockdowns began. By some counts, streaming media viewership has doubled since COVID-19, and that’s not showing many signs of slowing down. 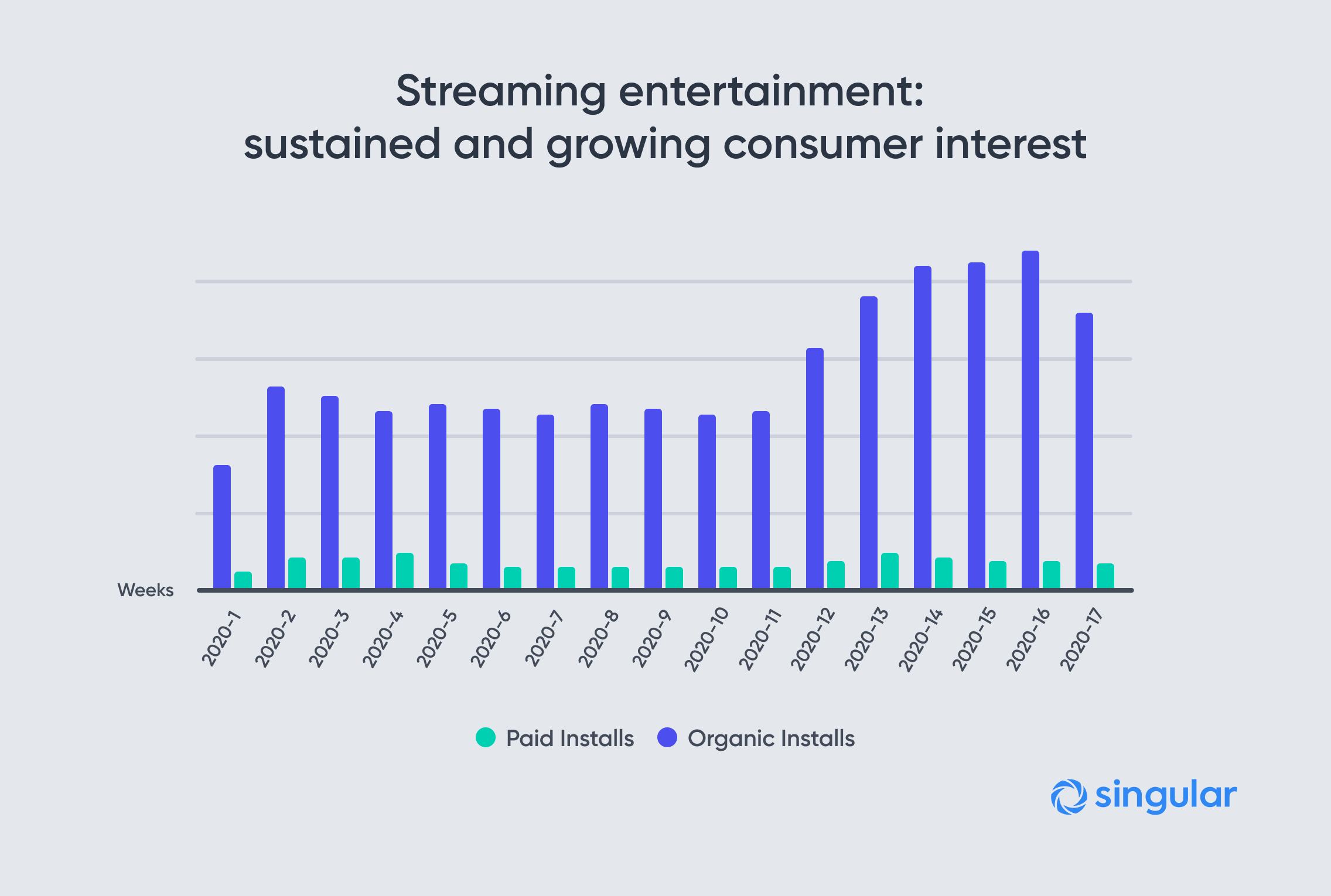 Health & fitness
Health & fitness generally has a natural bump in both paid and organic customer acquisition in early January as everyone tries out New Year’s resolutions. But the category has also significantly grown since Coronavirus shut down gyms: everyone who wants to keep working out needs to replace weights, equipment, and instruction via at-home gear and subscriptions. 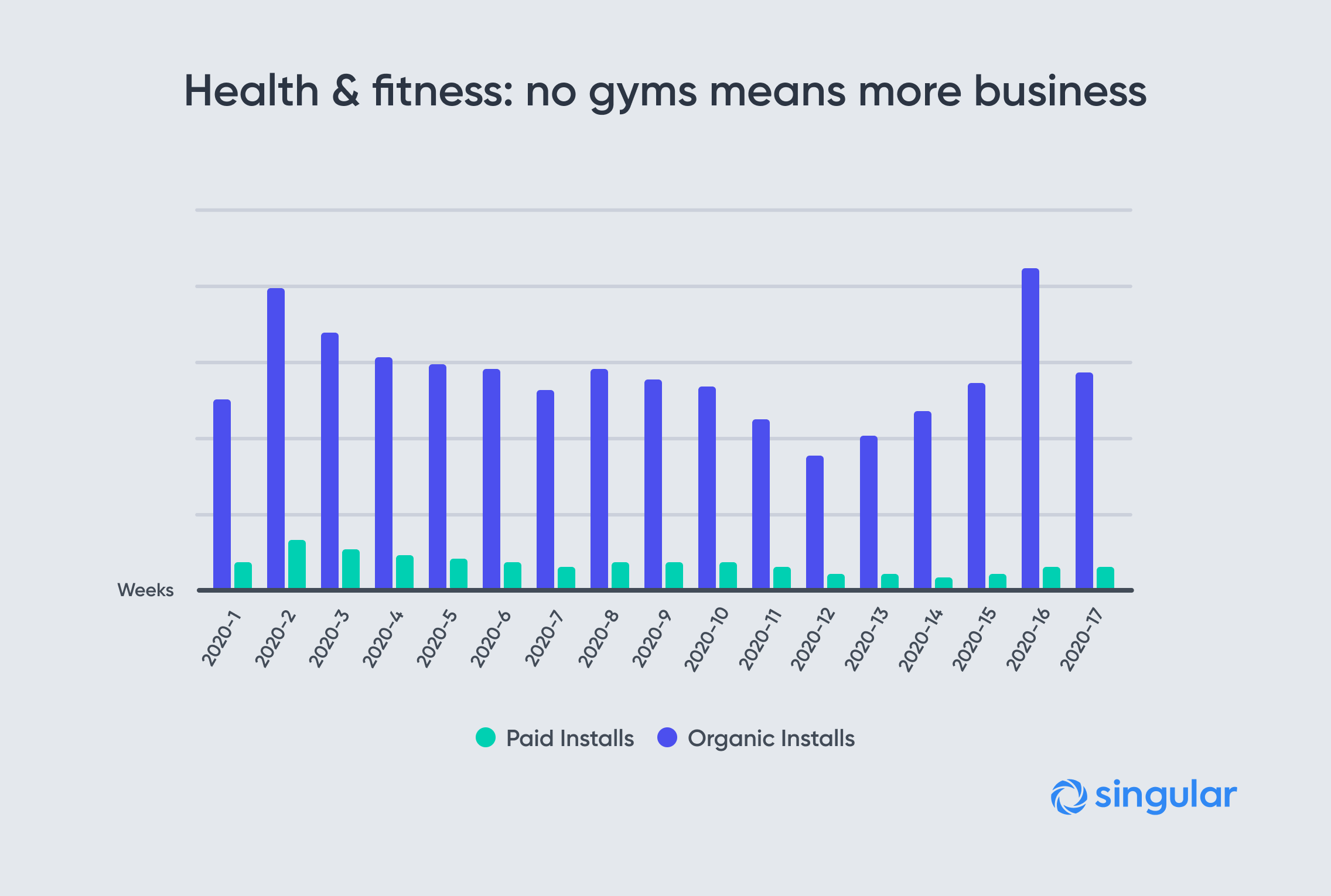 There’s been significant demand throughout the year, but we’ve seen an additional spike in just the last few weeks. One of the challenges has been out-of-stock situations at regular sources, and limited delivery windows at others. That’s forced digital shoppers to expand their usual small list of retail outlets and try new ones. 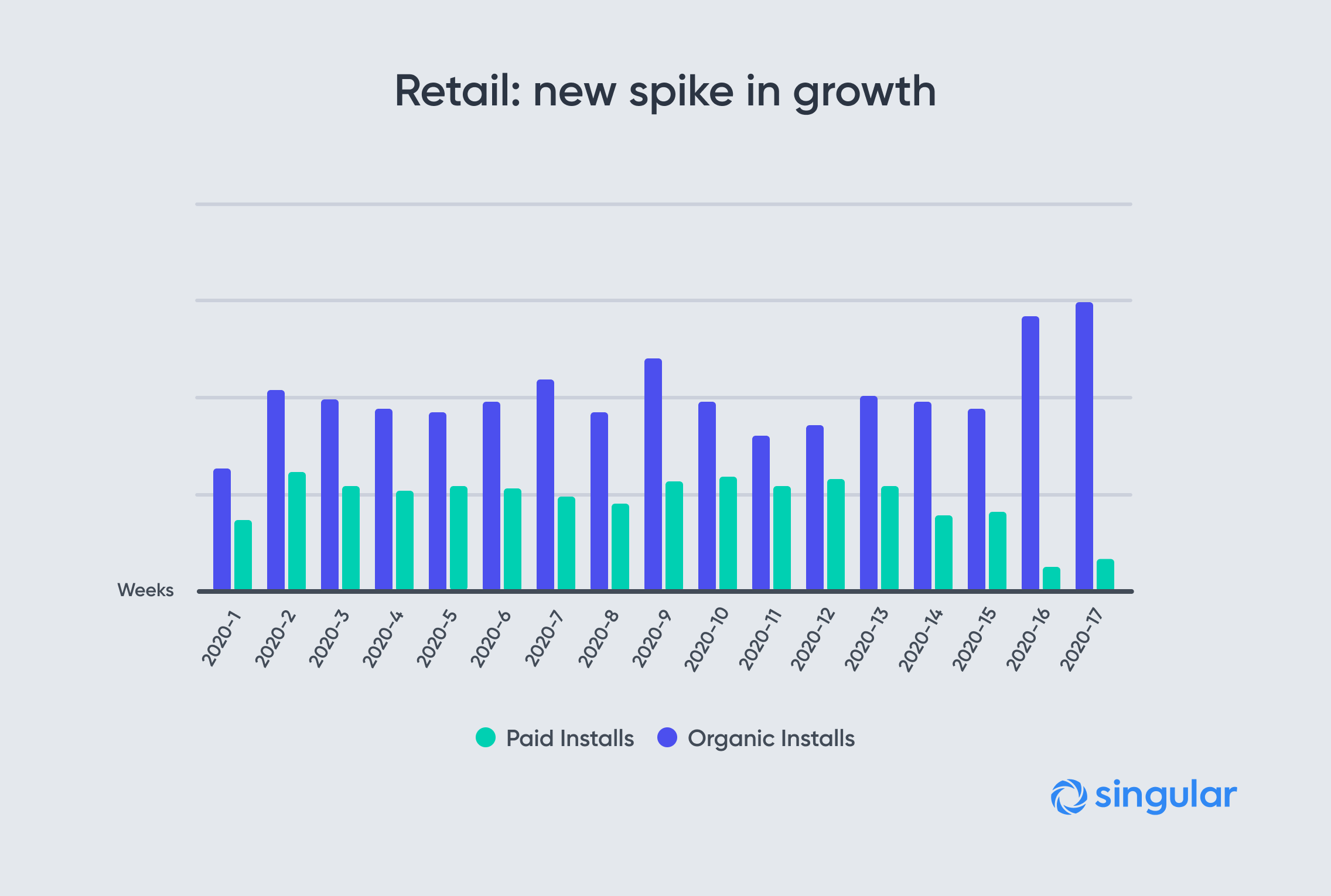 Social – communication
April’s been a big month for social and communication tools. It’s generally a hot category, but now we’re particularly hungry for additional means of connecting with loved ones. 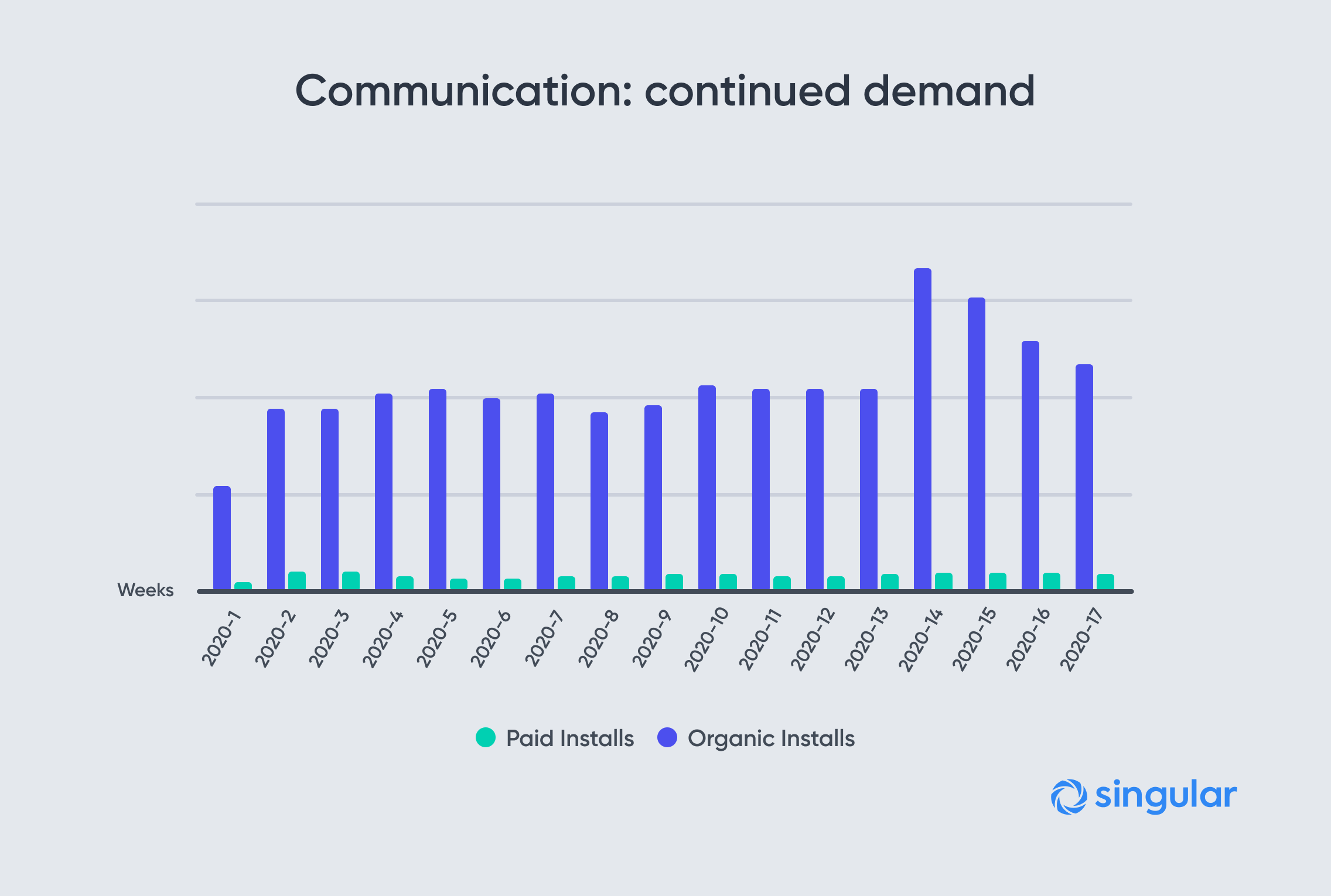 Social – dating
Who would have thought that Zoom would be a dating app? While it’s not included in the data shown in this category, people are using Zoom for speed-dating that would ordinarily be done in in-person settings.

That’s just one of the things that are making dating an interesting category. While organic installs are declining as people likely believe that dating strangers during a pandemic is problematic, paid activity is way up. What’s going on? Dating apps are reinventing themselves and adding features to make virtual dating fun.

One example: Tinder made its “Passport” feature free for all users so that they can change their cities and “date” internationally. 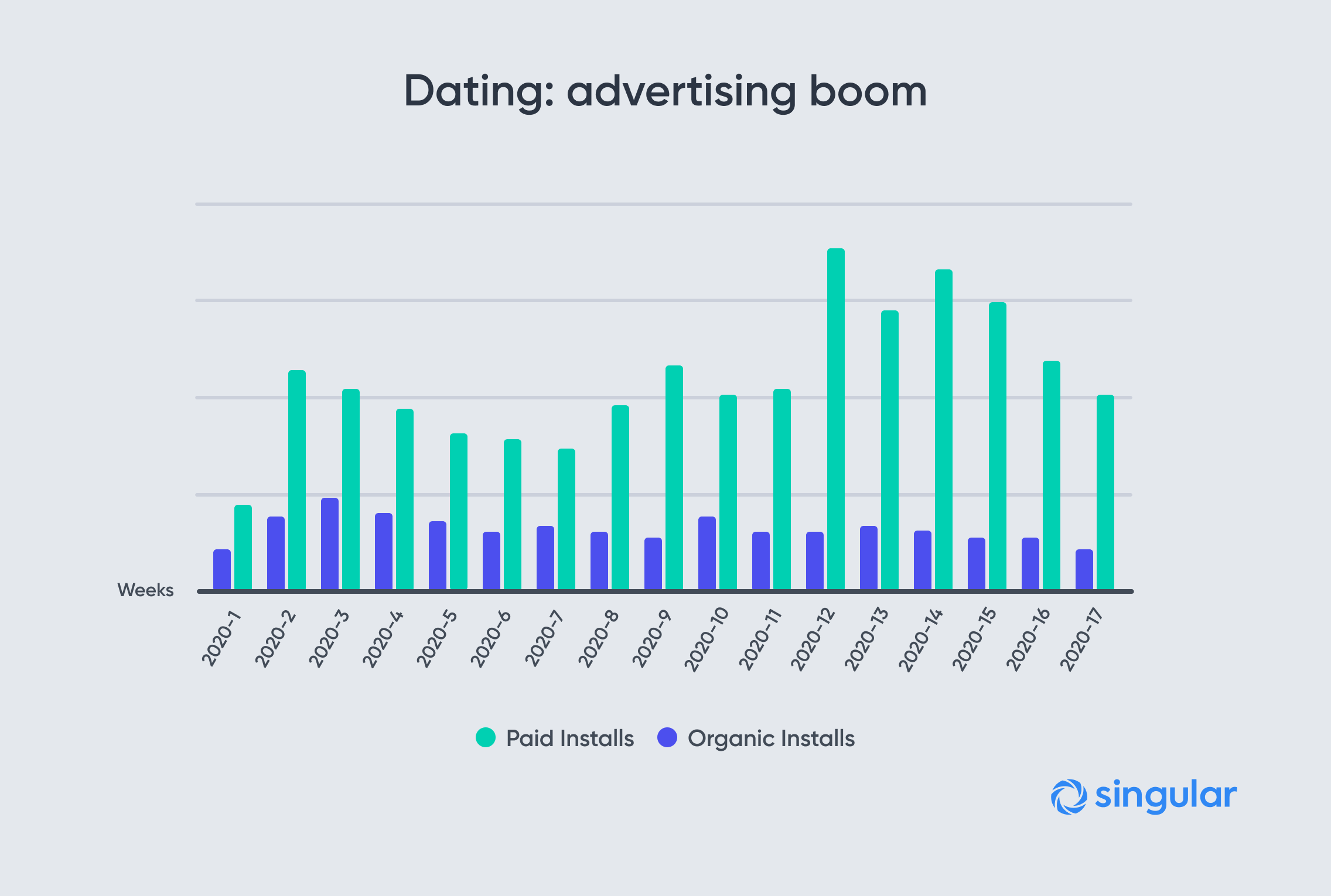 As we see increased pressure in the U.S. and elsewhere to re-open economies, mobile app install behavior will continue to change and marketers will have to adjust as well. We’ll be re-examining this next few weeks.

“As many businesses quiet down during challenging times, this is a critical time to push ahead and stand out,” Anna McNaught, an entrepreneur and Instagram strategist, told us recently. “It’s a chance to create innovative content, inspire potential customers, and become a leader in your industry.”

Until next time, stay safe and well!