Ever since 2019, at the initial debut of SKAdNetwork, and the 2020 WWDC’s introduction of App Tracking Transparency (ATT) enforcement for iOS 14 – we at Singular, and many others, have been paying extra close attention to Apple’s annual developer conference (WWDC) – since it’s often the most official source (and possibly only source) of critical information pertaining mobile marketing and measurement privacy.

This year’s WWDC, which just kicked off today, has a lot of interesting privacy-related updates, and while we don’t know all the details yet (as of writing this article) – we do know a few things are coming.

In today’s “State of the Union” session (which followed Apple’s keynote session), there was a 5-second segment that briefly mentioned that Apple had received a lot of feature requests for SKAdNetwork, and they listened and made improvements. That’s great news for every single player in the ecosystem since SKAdNetwork, as many know, is quite restrictive, and additional functionality is desperately needed. 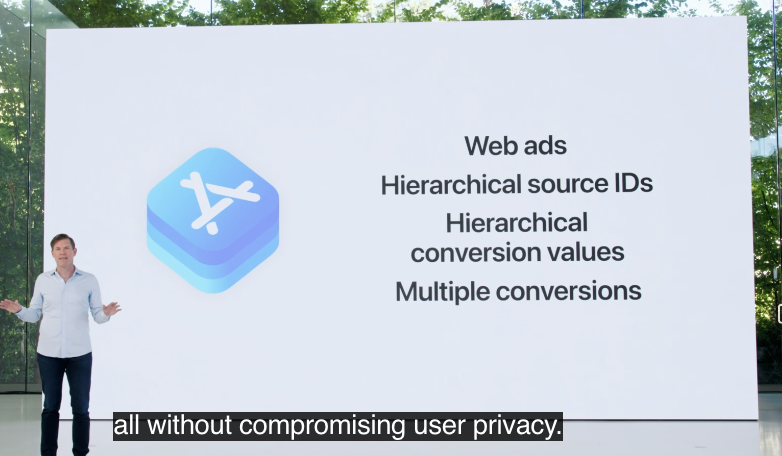 WWDC has a dedicated session about “what’s new with SKAdNetwork” on June 8th – where we’ll learn all about the new features:

This change is not in the iOS 16 release notes – which leads me to believe it will be released in a later beta of iOS 16 (e.g. “iOS 16 Beta 2”) or possibly even a later sub-version of iOS 16 (iOS 16.1, etc). This happened before – where Apple took longer with SKAdNetwork, and these features appeared in later betas.

Web to App support is coming to SKAdNetwork

Apple mentions “SKAdNetwork attributions for Web Ads” in their session description, and the session’s image is pretty revealing too with the Safari icon pointing at the App Store icon. 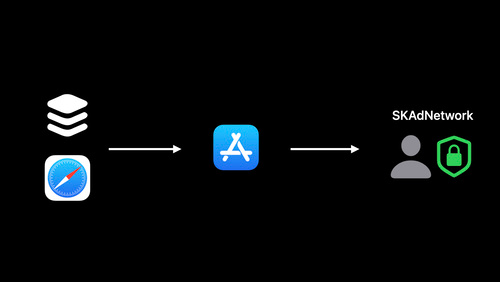 This is extremely valuable since the use case of tracking users from your website to your application has always been a gap in iOS. And… it makes a ton of sense, it’s a quick win technically given the current design of SKAdNetwork. (And if you listened to our last webinar on “The Future of UA”, web-to-app attribution was my wish for our “name one realistic feature I’d like Apple to add to SKAdNetwork” segment).

This one could be huge. Today, marketers only have one shot at sending a conversion value through the SKAdNetwork API – which means you have to make this impossible compromise between having early install reporting versus waiting to collect as much data as possible. And if that wasn’t hard enough, you have to identify the right combination of events to ensure you can collect as much user behavior information as possible before the SKAdNetwork timer elapses and your postback is sent without the insights you need.

It’s unclear yet as to how Apple will choose to implement it, but the name “multiple conversions” is already promising! I’m hoping they will follow Google’s Privacy Sandbox approach, and that it will facilitate things like Cohorted Revenue/ROAS calculations.

This is harder to speculate on since the name can mean a ton of things! This might mean that there’ll be a group of sorts (hierarchy) of conversion values and source IDs – where even with privacy thresholds – you’ll still get some data.

This could be useful where:

Many were anticipating some stricter enforcement by Apple of privacy policies. We’ve been looking carefully for it, and the only session that might indicate something (and this is us speculating) is the “Explore App Tracking Transparency” session on June 9th.

They’re saying that “App Store Policy now requires that all apps receive permission through the ATT framework”, and that they’ll explain exactly how this policy defines tracking. I think this is a much needed session since there’s been a lot of confusion around it.

We’ve already seen Apple trying to clarify things in a ton of different documents, including their developer guidelines – with increasingly more pointed callouts (see image below – directly mentioning methods that have “aggregated” in the name that some measurement vendors are using). 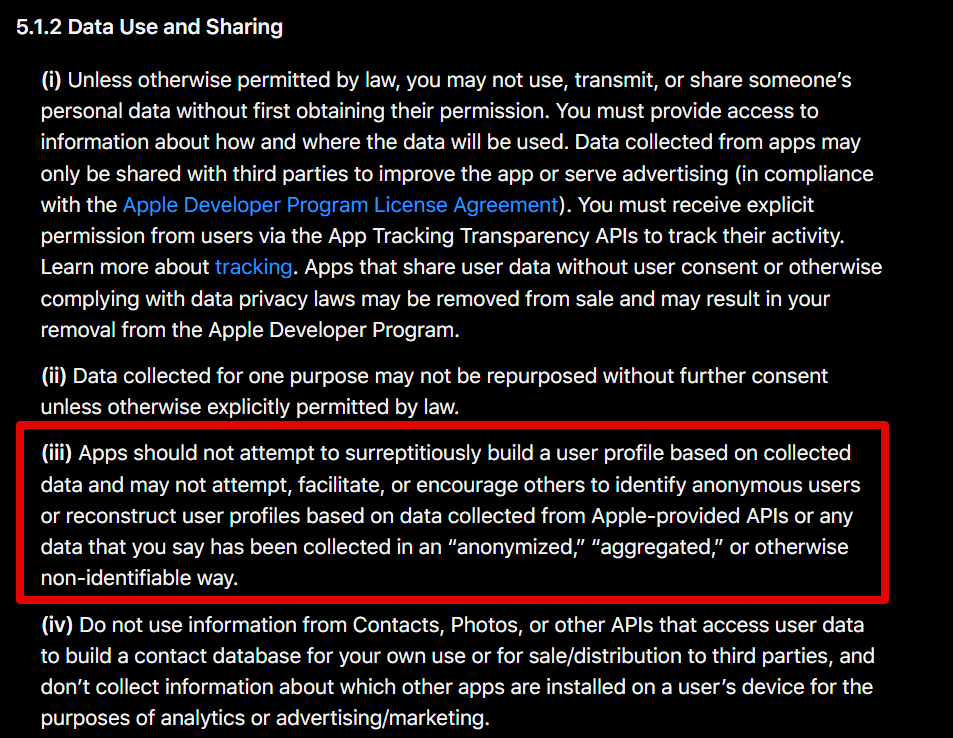 That being said – I do think that more clarification is needed, since the ATT popup does discuss distinctively “tracking between apps owned by other apps and websites” – which means “owned media” should be ok. But it also seems like it’s not.

Hopefully the June 9th session will make sense of it.

We’ll keep updating our blog live with all the latest – so subscribe if you want to follow along.

Also – if you want to learn more, faster, and interact with me and others in real-time, join the free Mobile Attribution Privacy slack group – which has 2700+ members from the world’s leading companies discussing privacy in iOS and Android every day as news unfolds.