Google has been working on their Privacy Sandbox initiative for a while, mostly focused on the web. Yesterday Google also announced their plans to expand the project to the Android platform. While the web sandbox is trying to remove third-party cookies (mostly because of outside pressure), the Android Privacy Sandbox project’s goal would be to deprecate the GAID.

Doing so would impact a lot of mobile marketing systems from measurement, targeting, retargeting, and more.

The good news is that Google’s proposal for measurement – as it stands right now – seems quite good. In fact, it’s better than good. It’s surprisingly thoughtful, flexible, and proves that you can get rid of GAID without wreaking havoc on the app ecosystem.

It might not be very surprising given Google’s deep roots and foundations in the advertising ecosystem, their inherent understanding of the space, and their desire to leave it unbroken. It’s probably also a lot of battle scars from trying to do similar things on the Web, that led them to a pretty great first draft.

Google says the expected timeline for the project is 2+ years – and we suspect that what we’re seeing today will keep on changing in that period. Nonetheless, I want to applaud Google for putting these ideas forth as proposals, ahead of time, and seeking feedback! We didn’t get a chance to do that with SKAdNetwork, and I think it’s such a shame …

The Android Privacy Sandbox itself has a few topics that address targeting and retargeting, but this article is going to focus mostly on the attribution stuff … because well … it’s a thing we care about a lot here at Singular 🙂

But first – a caveat:

This post is based on my initial interpretation of what is a fairly early and complex document released by Google. If you think I got a detail wrong, please tell me about it!

The main idea here is that Google will eventually deprecate GAID, but still wants advertisers to be able to run user acquisition effectively. As the biggest ad network on the planet, Google knows measurement is key to that.

To do that, Google will create an on-device service that will be built-in to the Android OS. They call that service the “Attribution Reporting API,” and this service will have a few tasks:

Event-level reports kinda sound like SKAdNetwork. Are they similar?

At first read – it seems way better than SKAdNetwok.

The “event-level reports” will provide a super granular breakdown of your upper-funnel data (think campaign, sub-campaign, creative, down to the click_id itself), paired with fairly limited conversion values (3 bit conversion values – vs SKAN’s 6 bits).

It does seem, however, that it will be possible to send up to 3 conversion events at separate times that will each be attributed to the view or click. So probably the first conversion event will be used for the install, while the subsequent 2 conversion events will be for meaningful KPIs that can happen later in the user’s lifecycle. That’s huge … and was one of the main features we wanted from SKAdNetwork.

Here’s a summary of event-level reports vs. SKAN: 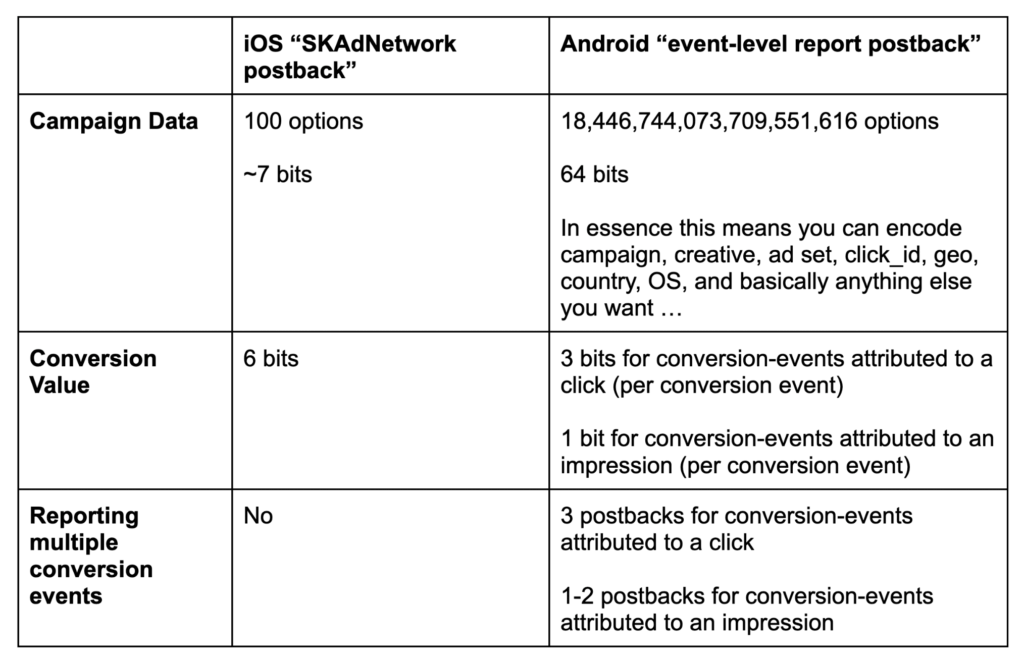 What kind of reports can we build with event-level reports?

To make it simpler to understand, here’s an example of what a set of event-level postbacks could look like:

The “trigger type” is defined by the advertiser/MMP, and is very similar to SKAN conversion values. It does have fewer bits than SKAN, but you can send up to 3 triggers at different times … so good news for cohort reporting!

Here’s a super simplistic example for how an advertiser/MMP can define “trigger type:”

Putting all this together, the result in a Singular dashboard could look like this:

So while the “trigger type” (conversion value) is more limited than SKAN, you get incredible granularity on the upper funnel data, and you get the possibility of sending multiple conversion events … and that by itself already provides a more powerful report than what we’re currently getting from SKAdNetwork.

And you know what – there’s more.

Check out the next section about “Aggregatable Reports.”

What kind of reports can we build with the “aggregatable” data?

This area is particularly exciting, and it has a pretty clever implementation as proposed by Google, but there are also some vague details at this point. 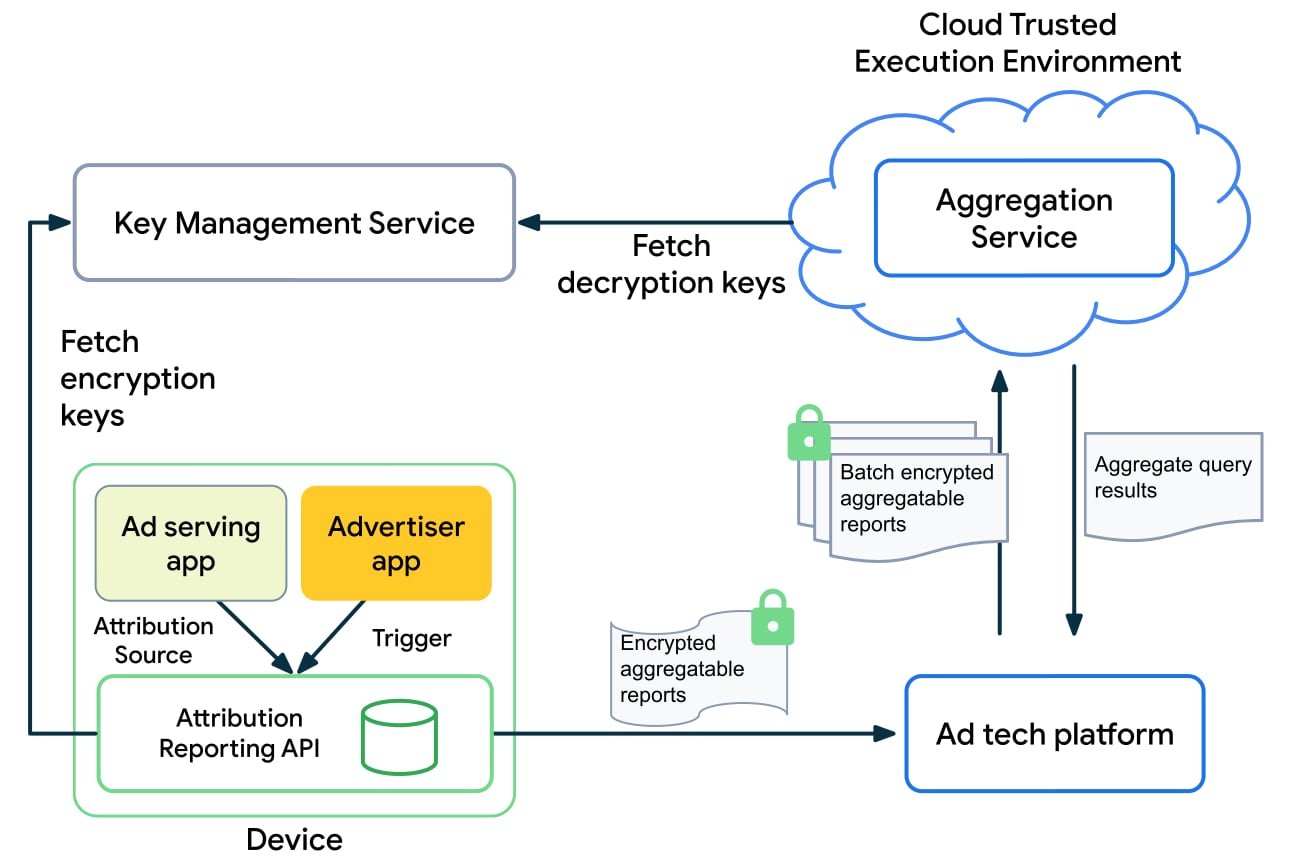 The general concept is as follows:

Plus, on the aggregation service:

This “Aggregation Service” is a program built and signed by Google, but will be running on other companies’ servers in what’s called a “Trusted Execution Environment.” That means that if Singular is running an “Aggregation Service” we can’t manipulate how it works, and it’ll work how Google intended.

How will the attribution waterfall logic work?

We think we understand what’s going on, but as we said at the top of this article – there’s a lot of complexity and some unclear direction in the developer documentation as it currently exists. That will probably get cleared up as the project progresses, but not everything is 100% set in stone or fully explained.

Here’s what we think is happening:

Clearly item #4 above raises the question of deduplication across ad networks. We can’t have all the networks winning (and getting paid) as this would skew the marketer’s view quite considerably by double counting.

The documentation specifically addresses third party measurement use-cases by enabling redirects on the view/click events. So this is how we think companies like Singular could achieve deduplication across networks for their customers:

If this flow is implemented in the way we proposed, this would also have the added benefit of providing some MTA reporting!

Open questions: so much more to learn

There’s a lot we have yet to dig into, and plenty that will need clarification from Google or the ecosystem as we progress. Here are a few open questions for me:

It’s early days. Google literally just announced this initiative, and clearly there’s going to be a lot of iteration. We’re excited that Google is looking for feedback, and we’re excited to collaborate with them on this initiative. The early documents show a much healthier approach that can offer dramatically better reporting than SKAdNetwork, which is very encouraging. Who knows, maybe there’s even a few things here that Apple might include in SKAN …

One thing is sure, you can count on us to keep covering this, and iterating on it with Google and our customers.

If you’re looking to discuss this further, we highly encourage you join our professional Slack group on all matters of mobile attribution privacy.