Will coronavirus have a long-term impact on digital advertising?

There are many uncertainties right now as the digital advertising world, like everyone else, contends with coronavirus.

How long will the overall economic downturn last? Will consumer behavior change permanently? Where should marketers cut back or reallocate their digital advertising budgets? How can teams stay aligned while they’re working from home?

Right now, there are more questions than answers. And we ultimately won’t know the true impact of the downturn until more time passes. However, there are a few things we can learn from past performance during the most recent market crash.

The shape of things to come is also, in part, what we make it. As we found after surveying 250 marketing leaders, 45% of marketers are spending these time building capabilities that’ll benefit them later.

What this all means: There are several reasons to hope that the outlook isn’t necessarily all “gloom and doom” for the mobile app economy in the long-term.

A look back at the 2008 financial crisis

Let’s take several steps back. Inevitably, economists are rightfully drawing parallels between coronavirus’s impact on the global economy and the 2008 financial crisis. In the case of coronavirus, there’s every reason to think the fallout will last for far less time and the economy will bounce back a lot more quickly.

For starters, the current downturn is very different from the one in 2008. Still, it’s worth comparing the two.

Anyone could get a home loan.

And that means anyone. It didn’t matter what your credit score was—banks were handing them out like Oprah gave away cars.

These were not traditional loans.

They were subprime mortgages, i.e., a type of home loan issued to borrowers with low credit scores (often below 600) who wouldn’t qualify for conventional mortgages.

The loans were awful.

They were bundled with other lousy mortgages and sold to financial institutions. They were adjustable-rate. So, if the rate changed, it posed a hardship to people who couldn’t afford to pay a higher mortgage amount.

The crash was even more awful.

When the interest rate indeed changed, a lot of people suddenly couldn’t pay their mortgage, and many financial institutions and individuals failed to recover. The unemployment rate hit 10%. Many people lost their savings (with some still trying to bounce back a decade later).

It was a different time for advertisers

Recall that 2007 delivered the first iPhone—which boasted Safari and mail. There was no AppStore or Google Play Store. Programmatic media didn’t exist the way it does today.

There were archaic ways to advertise online, such as working directly with a publisher, social media platform, or Google Search Ads. You could also waste money on TV ads and/or print media. The app market didn’t even exist.

In other words, just two decades ago we were living in a relative Stone Age compared to now. And, while a market correction fueled the 2008 crisis, a pangolin and resulting virus—one that will eventually be combatted through a vaccine—brought us our current reality.

Some industries boomed during The Great Recession

By late May 2011, alcohol sales had jumped more than 10% as unemployment grew to 9.3%. In addition, the recession-proof console gaming industry hit an all-time high by the summer of 2009—a trend that started in 2007 and didn’t stop in the face of diminished incomes. Entertainment did pretty well, too, with 2009 movie ticket sales jumping by 17.5%.

This is not to minimize the real pain and suffering that millions of people are experiencing. Those who continue to be able to afford entertainment and services are, in this case, part of a lucky and privileged group of people. Their online activities, at the moment, provide a measure of solace as unemployment continues to skyrocket.

These online activities, of course, are welcome news to the digital advertising industry.

Now let’s head back to 2020, a year we’d probably all like to press the reset button on.

As long as many people remain either out of work or furloughed, it’s going to be a really rough time all around, for everyone.

It’s not surprising that certain categories of apps have been hardest hit first: sports, travel, dating, and specific types of on-demand services like ride-sharing. On the other hand, people aren’t likely to cut back on playing their favorite freemium games or watching their shows on streaming apps.

Our research shows that advertisers in segments such as gaming are increasing their advertising spend as people devote even more time to online games. Additionally, mobile device usage is way up, due to people making more mobile phone calls and spending more time online, particularly on social media sites. 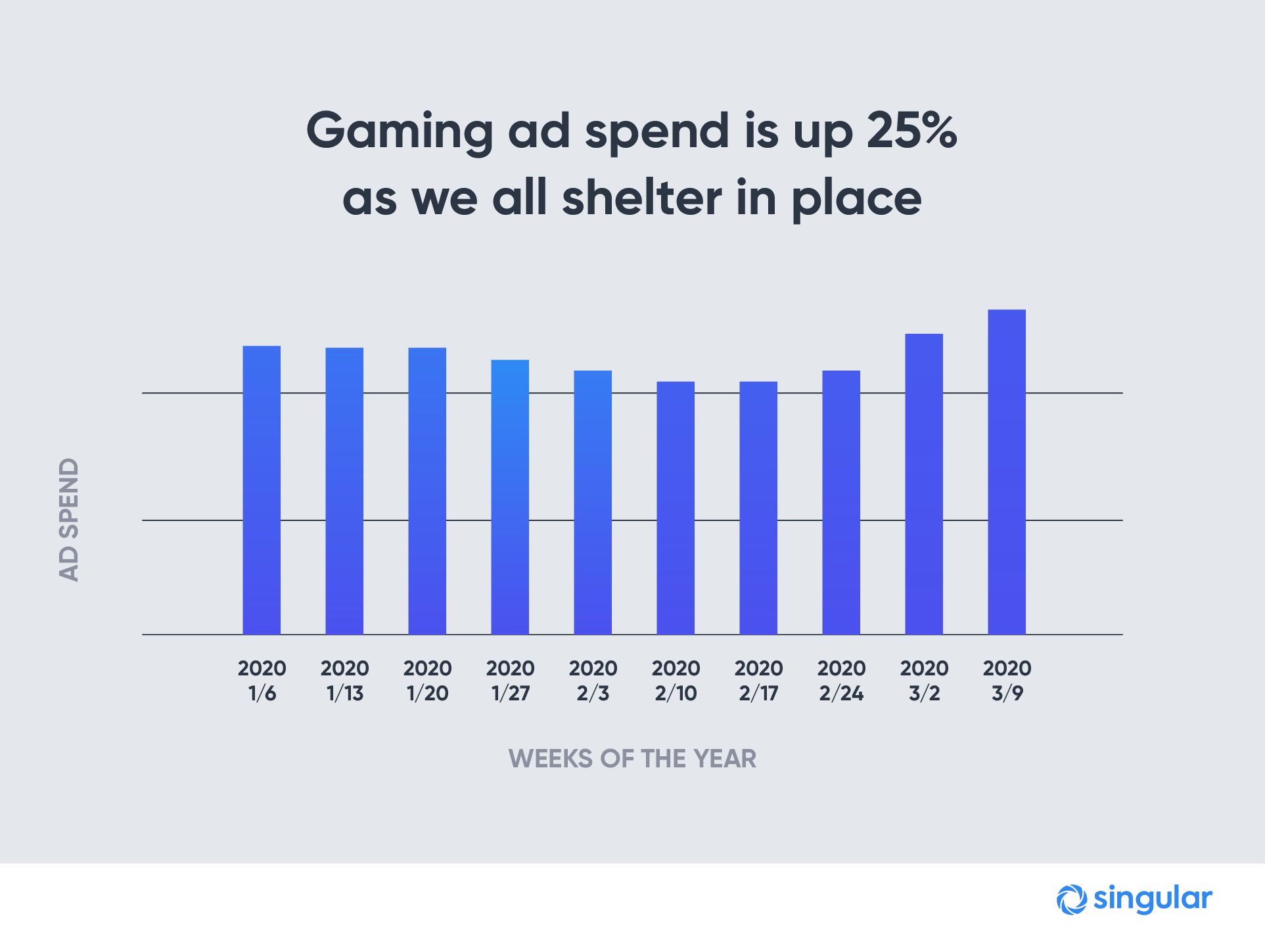 As we start another tough period, escapism is ramping up again.

As far as gaming goes in the modern economy, people are no longer willing to pay $500 for a PS4 if they can play the same game on their current iPhone or Android. Further, several factors fuel in-app purchases for gamers:

In other words, escaping reality.

The coronavirus is changing consumer human behavior—people are at home 24/7, either looking for ways to fill their free time and/or afraid of venturing outside.

It’s been said that hard times boost innovation. It could very well be the case that apps replace current business models.

A great example of this is Peloton. You don’t even need a bike—you can now sign up for their app and stream yoga classes, strength-training classes, dancing classes, and more.

The future of digital advertising is unknown but promising

Unfortunately, there’s no historical data to clearly indicate where the app and global economies are headed.

But, we can say this: although the short-term future doesn’t look bright, the long-term future does. Mobile app companies will innovate. They’ll boost investments in marketing and digital advertising. With solid, data-based advertising infrastructures in place, these companies can set the stage for increased performance once the coronavirus bites the dust.

Needless to say, that can’t happen soon enough. Until then, game on.

Coronavirus is the new normal—app use is changing in response

CMOs on coronavirus: 250 marketing leaders on what to do now

Will coronavirus have a long-term impact on digital advertising?

What Advertisers Should Keep in Mind During COVID-19