For hard-core gamers, games are the universe. They are everything: all-encompassing. In some ways, that applies to the whole of Google Play and the iOS App Store as well. Even though there are massive and successful apps in all verticals on both major mobile platforms, games dominate. They really, really dominate.

All of which has led some to say the App Store is actually the Game Store. (Which, of course, would make “Google Play” a particularly good name for Google’s app market.)

Lately, I’ve been looking at the top apps in a number of different categories, including the top 100 fintech apps, and I wanted to turn my attention to games. The question I wanted to answer: what are the top mobile games of 2021 so far, and how are they distributed across the iOS App Store and Google Play? An important caveat: I’m looking at the U.S. market specifically, which should be directionally accurate in many locations, but clearly not so much for countries like China, Russia, and Japan, among others.

Games are the vast majority of top-grossing apps, especially on Android

To no one’s surprise by now, most top-grossing apps are games. But it’s interesting that this is especially true on Android … which provides a few hints as to why fintech mobile growth marketers didn’t follow the bulk of the user acquisition crowd to Android when Apple made mobile advertising performance measurement harder in iOS 14.5. 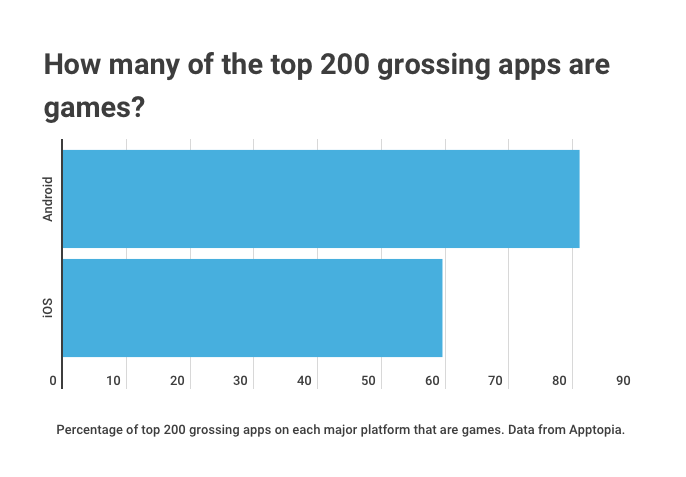 (Process: I checked the top 200 grossing apps on both iOS and Android via Apptopia, then eliminated all non-gaming apps.)

It’s not all games, obviously. YouTube is currently the top grossing app on iOS, while Android’s leader is Google One, Google’s storage and backup solution. And the big streaming media services are well-represented: Disney+, HBO Max, Pandora, Hulu, and Twitch. Plus, the biggest and best-known dating apps hit the top 10 on iOS: Bumble and Tinder.

In fact, you have to go down to the 34th highest grossing app on Android to get the first dating app, Tinder. Everything above it is a game, except for Google One and a couple of streaming media services.

The question, of course, is which games are winning.

The top 50 mobile games across iOS and Android

A few observations about the top 50 gaming apps

It’s important to note that there’s clearly a few ways of building a list of the top 50 apps. (And that “best” is very much a subjective assessment.)

Another important point, if you’re looking for the most profitable games across both iOS and Android, perhaps the best method is to get an accurate estimate of each game’s revenue on both major platforms, add it up, and rank them by revenue. One thing I didn’t like about this method is that it preferences iOS apps, which especially in the U.S. are more generally speaking more profitable than Android — 64% more profitable, on average, according to a 2019 calculation — even if Android apps are used a bit more. That means Roblox, which is tops on iOS but fifth on Android, actually makes more money than Candy Crush Saga, which is second on iOS and first and Android.

I wanted to avoid platform bias as much as possible, so I took the top 75 games on each platform and sorted them by combined gross revenue ranking. The results are directionally correct, but bear in mind the caveats before taking them as gospel written in tablets of stone. (The results are also a little more generalizable to the rest of the world, as the U.S. is approaching 60% iOS marketshare right now.)

All of which, of course, leads to a couple interesting observations:

Even though games dominate, they’re not alone

It is important to note that although games dominate, there’s more to the App Store and Google Play. In fact, if you look at the top 10 apps by downloads in the second quarter of this year according to App Annie, no games appear:

In other words, the very biggest apps that get the most downloads and earn the most money tend not to be games. They tend to be social apps, messaging, apps, streaming media apps, utilities, fintech apps, and dating apps. But there’s only a handful of these.

After a few massive apps like that, gaming apps completely dominate the top-grossing charts. There’s simply many, many more of them that are extremely popular and super profitable. Only a very few social and media and entertainment players are big enough to compete.

Almost all measures of mobile app profitability are dependent on in-app purchases. In fact, 98% of Apple’s in-app purchase revenue came from games in 2018 to 2019, as we learned in the Epic vs Apple lawsuit. But the most profitable kinds of apps are not those that facilitate purchases of digital items for in-game or in-app use.

In 2020, knowing it was facing pressure from Epic Games, Basecamp, Netflix, Amazon, and multiple other parties to open up payments, Apple commissioned a report and opened up its data to an independent review by Analysis Group. The results, Apple says, are that 80% of the value exchange facilitated by mobile is not for digital goods but real-world goods.

From my story at the time:

Apple’s app ecosystem enabled $519 billion in commercial activity in 2019, the company suggested in a third-party report released today. Only $61 billion of that was digital goods and services, like games, e-books, and apps, and $45 billion of it was in-app advertising.

The lion’s share, $413 billion, was physical goods and services.

In other words, the most profitable app on the App Store and in Google Play is probably no game or streaming service or dating app. It’s probably the Amazon app, which enables a huge amount of mobile commerce for people buying good old-fashioned stuff made out of atoms and molecules. How much it makes exactly we may never know, but we do know Amazon owns about 50% of e-commerce in the U.S. And we know that its app is tremendously successful, with over 500 million installs on Android (as you can see on its app listing page) and likely over 100 million installs on iOS.

Once again, top games are subjective

Finally: the top games of 2021 are super-subjective. And it’s probably that if you approach such a list from a perspective of most fun, or most innovative, or more influential, you’d come up with a completely different group of games.

Talk to Singular? Maybe you should …

If you’re a gaming app and are looking for marketing intelligence that can drive growth, and marketing measurement that provides the best insights for ROI optimization, book some time with Singular.

Grab a slot here, and let’s chat. We’ll listen more than we talk, understand your business and your needs, and share what we can do to help.