In the past couple of years, fintech has become a lot like mobile gaming.

Don’t take my word for it. I recently asked Rovio COO Kieran O’Leary what mobile growth experts at brands can learn from the mobile gaming space.

“I think we can humbly say that we’re a step ahead,” he answered. “I think we’re way more advanced than a lot of other verticals out there because we segment and provide personalization to players.”

O’Leary is indeed being humble.

The mobile gaming vertical competes basically only with dating and media apps for supremacy on the top grossing charts for Google Play and the App Store. Most “apps” are games (even if you have to add up the game sub-categories to get a total), and 62% of all in-app purchase App Store revenue is driven by games. That intense competition drives aggressive technology purchases, hard-core data-driven performance marketing, and massive innovation. Gaming marketers might be 10 steps ahead, and not just in segmentation.

Fintech was a bit of a sleepy category three years ago.

COVID supercharged fintech app adoption, almost doubling use as the use of cash dropped by 42%. As of February 2021, there were a staggering 26,000 fintech startups, and in the first quarter of this year, fintech startups raised $22.8 billion, 50% more than all of 2020. And the number of Singular customers in fintech has grown by over 500%.

Sound familiar? Massive market, huge number of startups, heavy usage propelled by COVID, and significant investment? All those billions of invested dollars have to go somewhere, and one of those somewheres is customer acquisition. On mobile, we more frequently call that user acquisition, and hence the comparison with gaming apps.

So what’s going on in fintech mobile marketing?

Given all this massive change, I thought I would take a look at fintech mobile ad spend since January 2019 and see what might be happening.

Turns out: something very, very interesting.

Maybe fintech wasn’t exactly sleepy in 2018 and early 2019. Apple Pay existed. Google Pay existed. PayPal had been around forever, and the iconic retail investor app Robinhood was no longer a bright shiny startup, having been founded in 2013.

But barns weren’t exactly being burned down.

Until COVID, of course. 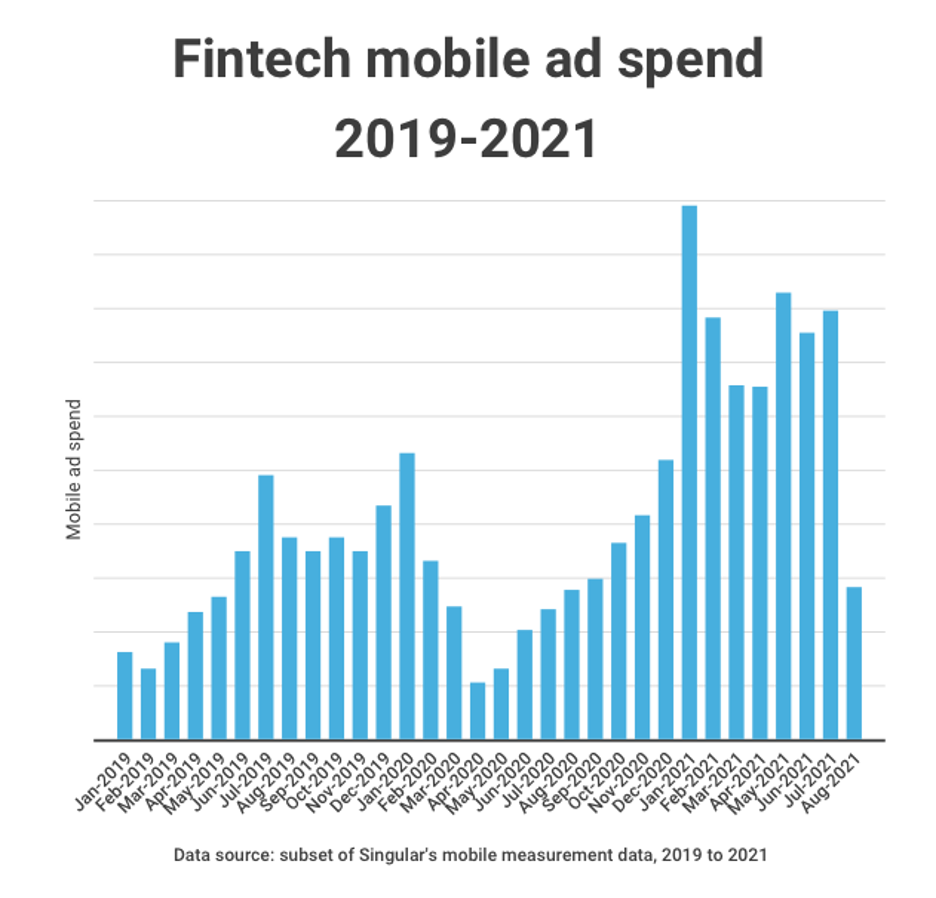 (Discount August 2021 in the chart above: there’s incomplete data for that month.)

It became very clear, very early, that COVID lockdowns created conditions that were ripe for mobile. But fintech apps were a little cautious. Maybe a lot cautious, because in fact the bottom fell out of acquisition spending for fintech apps in April 2020.

Fintech has actually done really well during coronavirus because, like other things where a mobile/digital solution can take the place of an on-premise/real-world activity, banking, insurance, and investment apps actually saw decent install and usage activity early in the pandemic.

In the beginning of April, however, fintechs turned the tap of paid user acquisition off, reducing activity considerably.

Fintech marketers got the memo in May, however, and fintech ad spend increased for eight straight months, culminating in January 2021 and staying significantly above “normal” levels for much of this year.

But there was something else perhaps even more interesting going on with fintech mobile spending. To see it, you have to look at spend data by platform: iOS vs Android.

Here’s an overview of fintech ad spend measured via the Singular growth platform since January 2019 that highlights the shifting ad spend by mobile platform over the past two years and seven months: 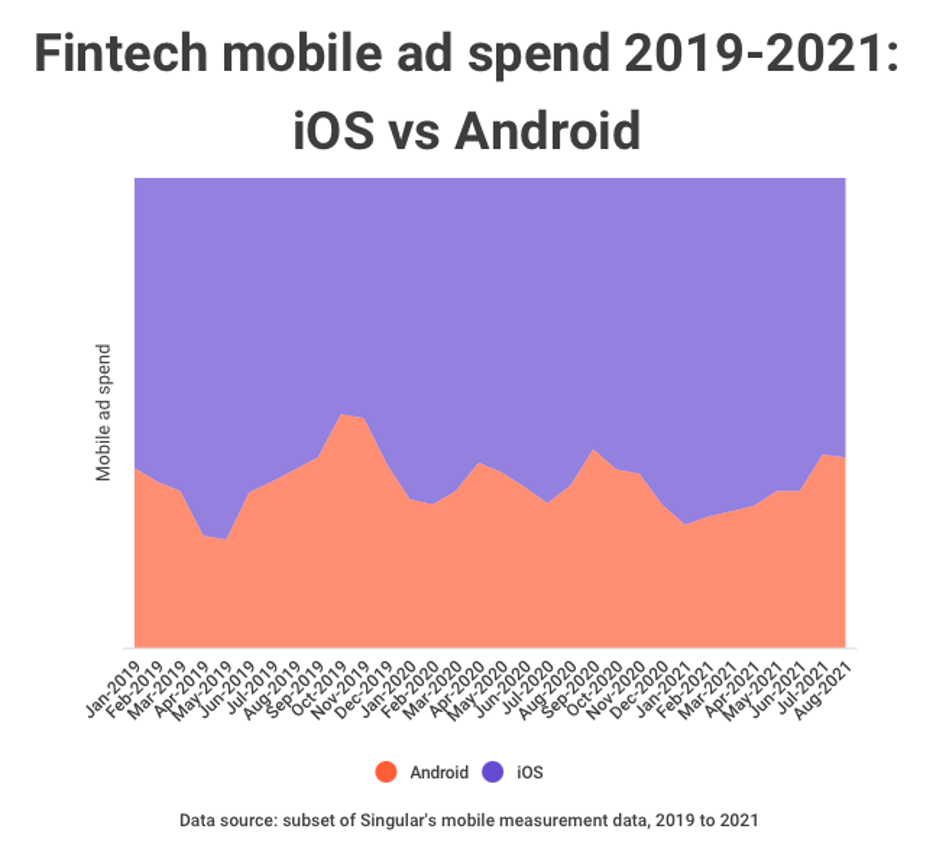 Anyone who’s been closely following the massive and ongoing iOS 14.5/iOS 15 privacy story — and what it’s doing to ad spend — will immediately spot a huge oddity. If you haven’t, you might need to refresh your knowledge of overall ad spend per platform, and how it’s been impacted by Apple’s iOS 14.5 privacy changes and the release of SKAdNetwork.

For instance, check out this chart from our June blog post on iOS vs Android ad spend trends:

In early February, mobile advertisers that have both an Android and iOS app split their buying almost evenly between Android and iOS. Between February 2 to 7, marketers spent 56.16% of their budgets on Android app install campaigns and 43.84% on iOS.

In fintech, there was significant movement to iOS in December 2020 to April 2021, where iOS hovered around the 70% share, and significant shift to Android from May to August, where Android bumps up near 40% as iOS dropped to the 60% level, but nowhere near the shift that the non-fintech market saw.

The market as a whole moved because iOS 14.5 dropped in late April and the IDFA, the device identifier that the entire mobile marketing industry on iOS was built around, started to disappear.

Without user identifiers, supply optimization is the first step to ensure relevancy and scale in your programmatic campaigns. Advertisers will demand more control over supply decisions to ensure all their programmatic is run with accountability and a high level of quality.

In response, many marketers moved acquisition and growth budgets to Android, where the GAID/AAID is still available.

Fintech shifted somewhat to Android, but stayed overweight on iOS.

A few clues: like gaming publishers, fintech app marketers are smart. Fintechs live and die by LTV and CAC. Fintech publishers have invested in technology and are generally ahead of the curve. And top fintech companies are massive spenders: high six figures to seven figures per month. They can afford to prepare for changes like iOS 14.5: buying software, putting significant data science teams to work, building new in-house BI solutions, and so on.

(To put it another way, many can’t afford not to. Besides the traditional banks, which make up only 15% of the top 100 fintech apps on Google Play and the App Store, the lion’s share of their revenue comes from customers using their apps; most don’t have stores, multiple channels, brick and mortar revenue-generating facilities, or any other plan B.)

Like major gaming publisher Rovio, they prepared for the shift very early, and were able to find ways to measure the results of ad spend under SKAdNetwork, and continue growing where they found revenue.

In other words, to a large extent in North American and European markets at least, on iOS primarily and Android secondarily.

And that turned out to be a prescient decision. As Tinuiti’s Liz Emery told me recently, continuing to invest in marketing on iOS when the majority of the market fled in panic to Android resulted in some extremely good deals and better rates on iOS user acquisition.

Our aim is to simplify programmatic advertising for apps so your business can keep on a desirable growth trajectory. Consider Programmatic App Impact campaigns your new tool to achieve the consistent uplift you aim for. We’re happy to consult you on this and run a new campaign strategy for your mobile business.

If you’re looking for solutions that help you zig when the world zags — and reap the benefits — you should chat with Singular. Book some time for a chat, and one of our experts will walk you through how the platform could help you supercharge growth.