App installs and coronavirus: 3 categories of disruption from January to July

If you’ve been following the Singular blog, you’ll have noticed our updates on the app ecosystem and coronavirus. (If you haven’t, go here and subscribe to our newsletter – we promise not to spam you. Scroll a bit, you’ll find it.) We’ve chronicled the coronavirus 19% jump in app installs, the missing dip, the drop in retention during lockdown, the 7-team alignment challenge, and much more.

Now we’re looking at the big picture: almost four billion app installs from January 2020 through to mid-July. That’s almost five months of corona time, and it’s enough to give good insight into how the most disruptive global event in nearly a century has impacted one of the newest industries on the planet: mobile marketing.

Mobile entrepreneurs and businesses are really, really fortunate to still be the new, new thing … and to be the primary way most digitally-connected people engage with their friends, their colleagues, their brands, and in essence, their world.

Most are doing pretty well during coronavirus. And some are growing incredibly fast.

Gaming is the perfect example. Always hot and always a consistent presence in the rankings for top downloads apps on Google Play and the App Store, games started even faster organic growth in mid-March as lockdowns increased players’ available time. The biggest spike was in May, with 56% growth over the middle of January. 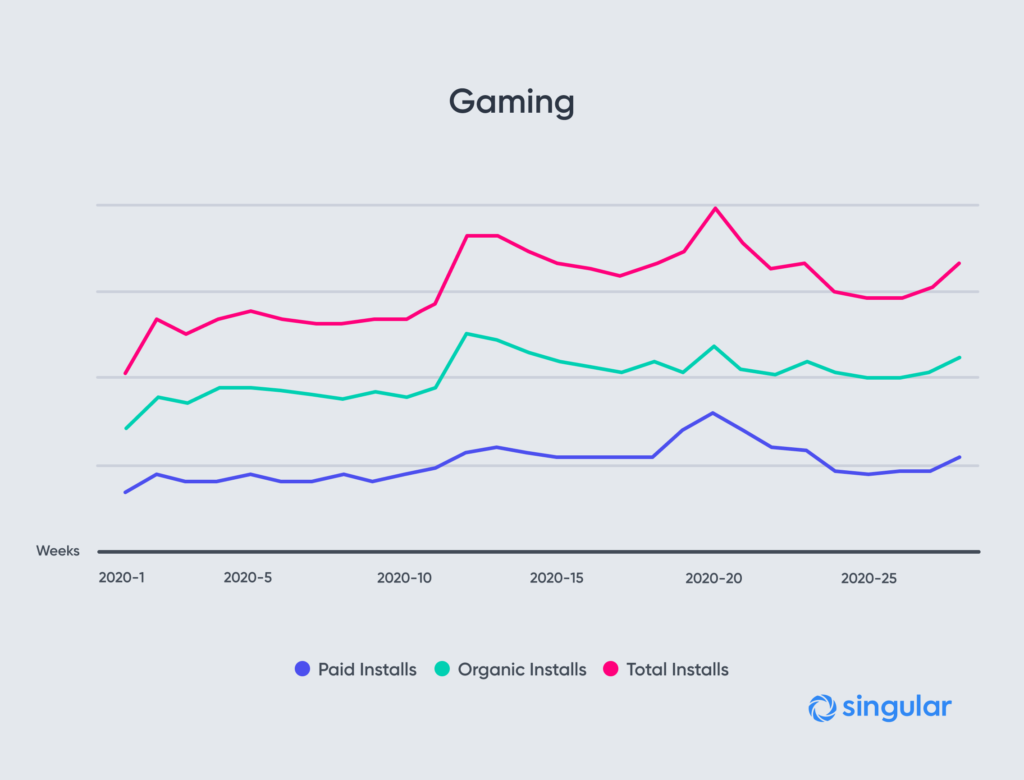 Growth has cooled somewhat since then, but it’s remained above pre-coronavirus levels and is trending up even farther in the last few weeks.

Health & fitness is another prototypical coronavirus growth category as people replace public gyms with home exercise equipment, tools, and services. It’s a little harder to tell in this chart because the health category always sees a January bump thanks to New Year’s resolutions, but growth skyrocketed in April and really hasn’t settled down since. 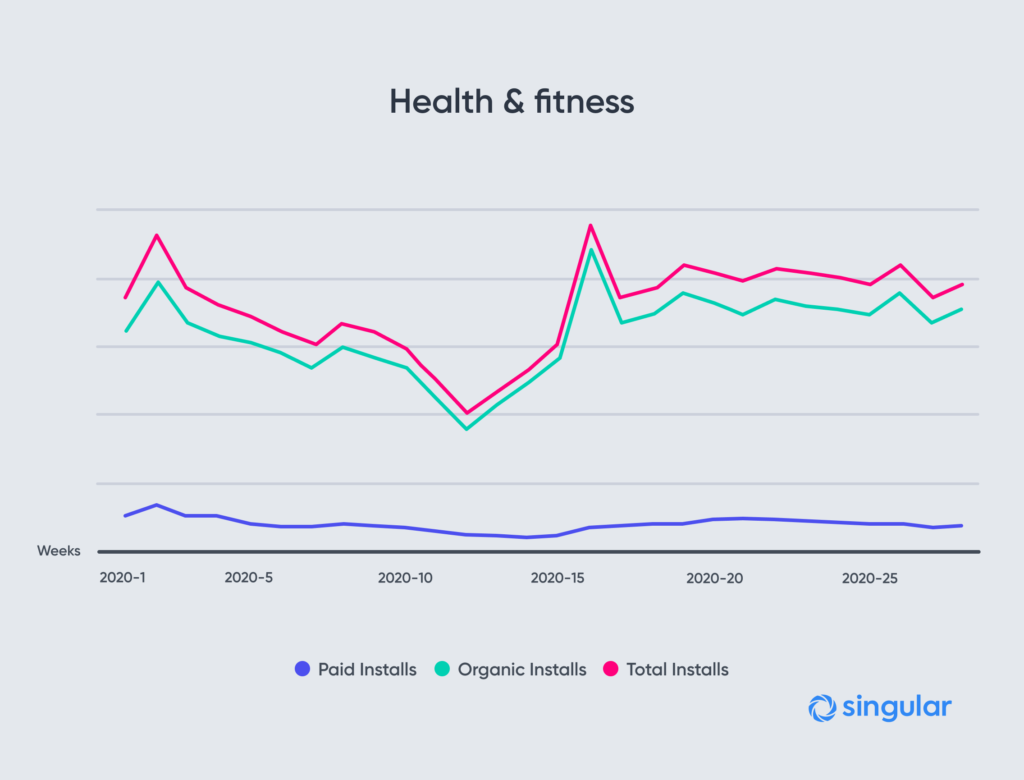 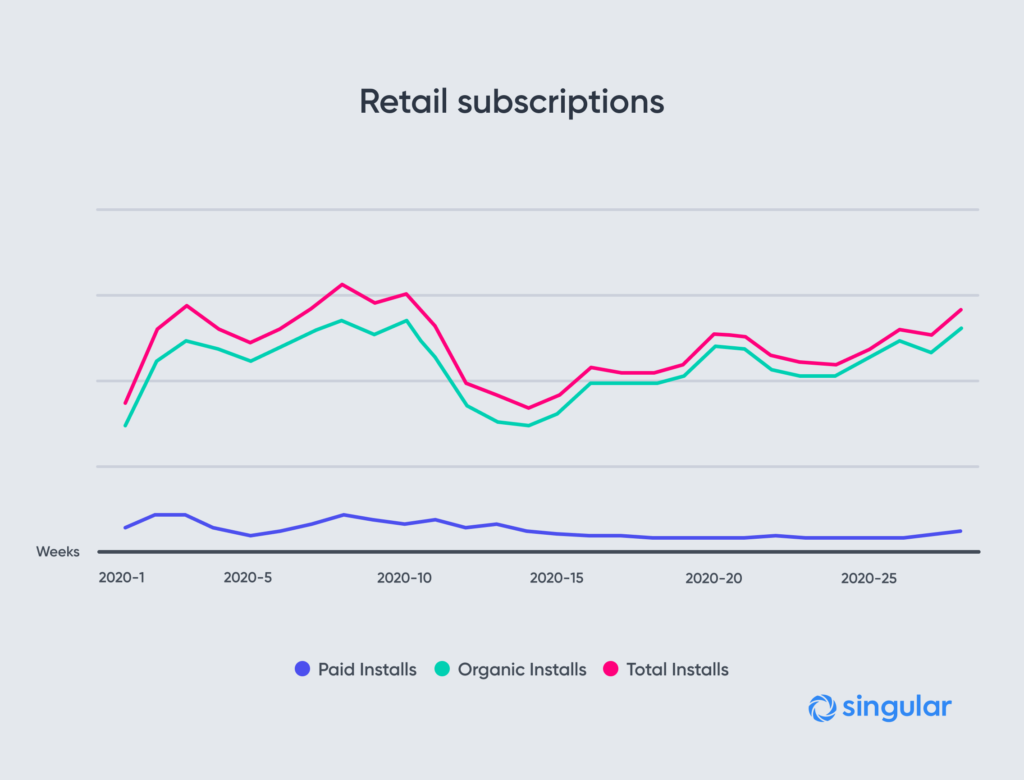 Retail subscriptions saw a big early surge in late February and early March, dipped in late March, and have been climbing fairly steadily since, with 71% growth from February to July. In terms of revenue, that growth has been up to 145%, according to Recurly, which manages subscriptions for Amazon’s Twitch, Barkbox, Asana, and other companies in streaming and retail spaces.

Streaming, of course, is a no-brainer pandemic beneficiary (if we can say that) that we’ve covered well already.

The growth resumed category contains ten verticals: mobile-based businesses that have struggled at times during coronavirus, but are also seeing some real positives. Some are doing well, and some still have a lot of climbing to do to get back to normal growth rates.

This list does include some very surprising verticals, including betting, car rental, and travel search:

Betting is an interesting category. There’s a spike of growth right where you’d expect it, around Super Bowl in February. But there’s another spike in early March — probably anticipating March Madness, which was eventually a coronavirus casualty. But surprisingly, we’ve seen steady growth since early April. 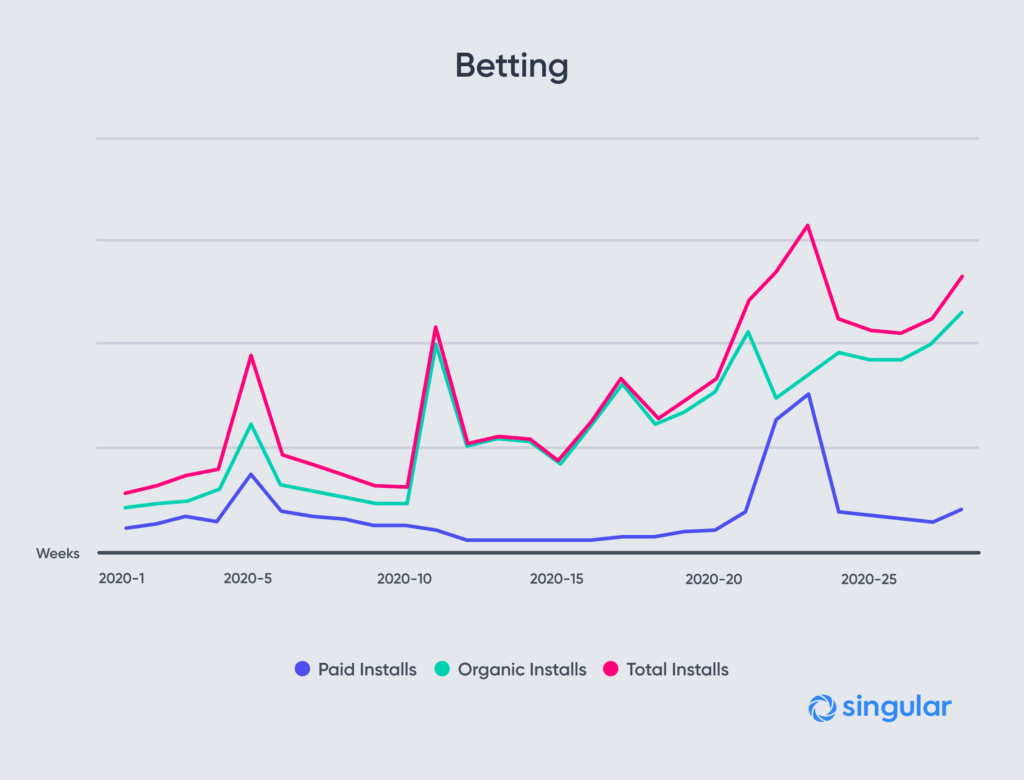 Ignore the late-May early-June spike of paid: the key line to check is the blue line of organic app installs, which has been trending up since early March, with a little spiky-ness. It turns out that when gambling fans can’t gamble on sports, they find other things to bet on.

Travel is another very interesting category.

Clearly hampered by coronavirus, organic installs of travel apps dropped a staggering 83% from highs in January to lows in March. 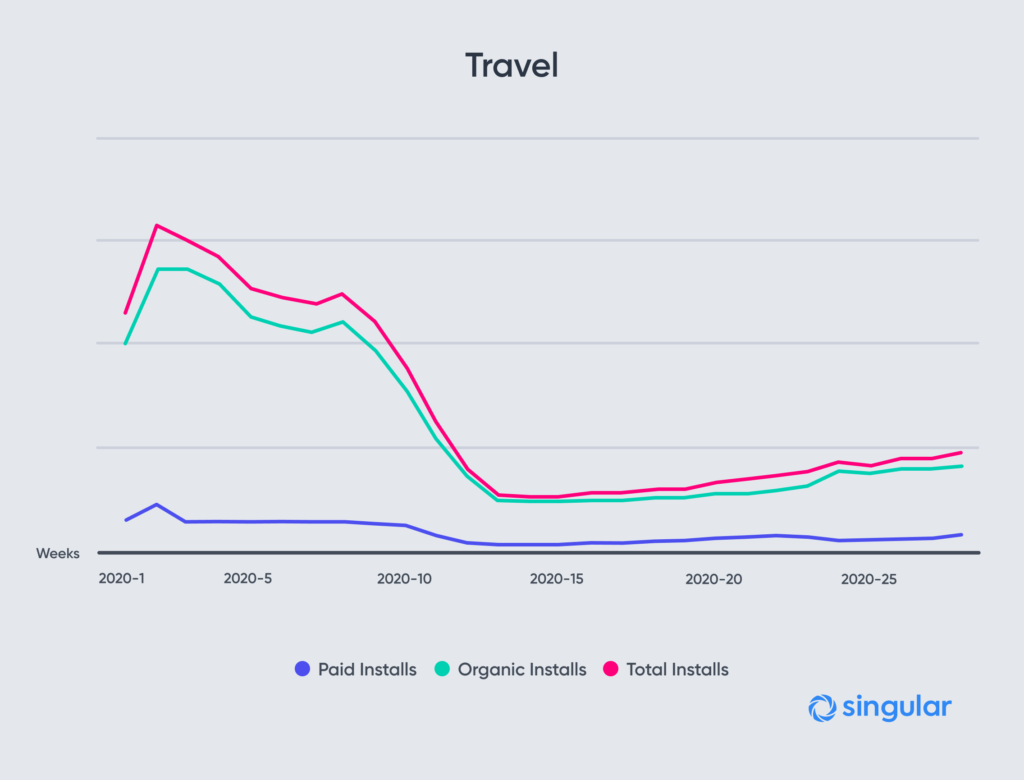 But since then, travel has ever so slowly rebounded, almost doubling in organic interest from March to July without an accompanying spike in paid installs. The tragedy of doubling when you previously dropped by 83%, however, is that you still have a very long way to go to get back to your initial heights.

Long story short: travel still has a long way to go. But there is some positive momentum.

The car rental category is also seeing significant growth since April, getting close to its winter organic highs. Paid user acquisition, however, dropped off a bridge at the same time and has not really recovered since. 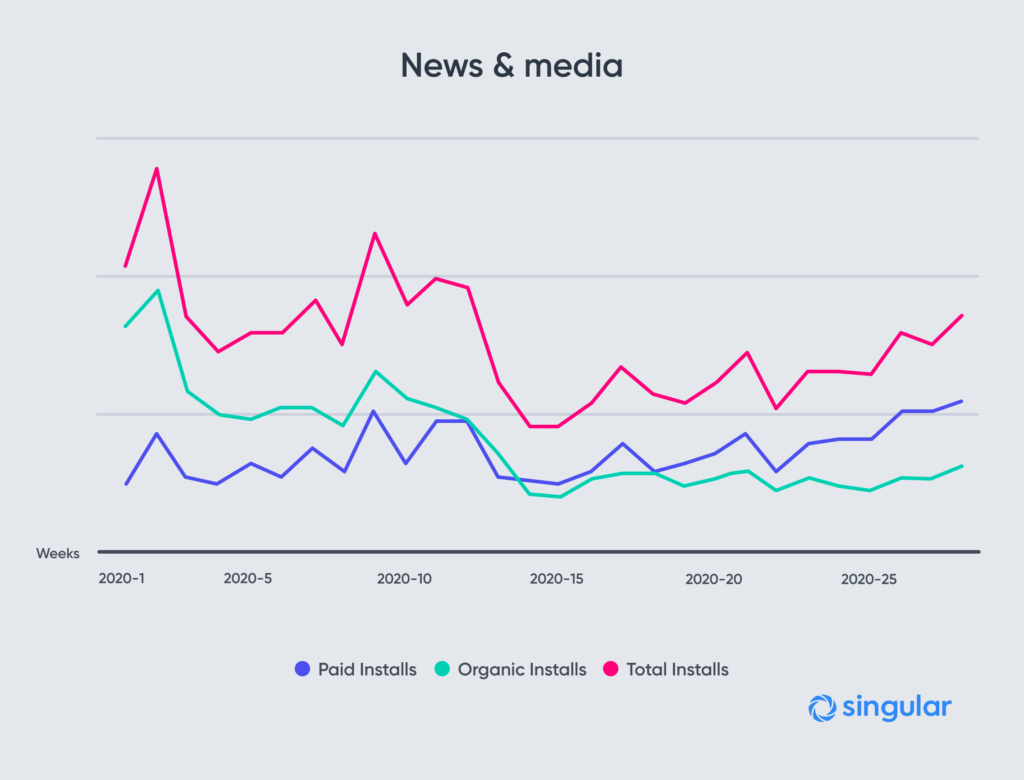 News and media is an interesting category. While organics drove growth early in the year, paid overtook organic in week 15: early April. The big rush of year-end, Super Bowl, and even coronavirus news dropped off — or, at least, people acquired the apps they needed to stay up-to-date. As media agencies found themselves with increased sessions and time-in-app, however, they decided to double down and acquire new customers, which they’re still continuing to do right now.

The coronavirus-impacted economy is generating different outcomes in different verticals. While some categories are going gangbusters because they’re becoming part of our new abnormal and others are recovering as we attempt to piece our economy back together, some are still feeling the strong effects of the global pandemic on their businesses.

One of them won’t surprise you, but the other might:

Fintech has actually done really well during coronavirus because, like other things where a mobile/digital solution can take the place of an on-premise/real-world activity, banking, insurance, and investment apps actually saw decent install and usage activity early in the pandemic.

In the beginning of April, however, fintechs turned the tap of paid user acquisition off, reducing activity considerably.

Interestingly for incrementality aficionados, however, organics have remained at reasonable levels: slightly down, but not horrific. However, until we see some positive action here, this category remains significantly impacted.

And ticketing: need we say more? Sports might be resuming, but live audiences probably aren’t coming back anytime soon so the need to innovate is still very real.

We know reopening is happening. We also know coronavirus cases are up in multiple countries, and governments are rightfully cautious. There’s huge opportunity for growth in some verticals, but it that growth also comes with massive uncertainty.

Companies that can pivot and remain relevant, or companies that are in areas of significant growth, have huge opportunities. While the ad monetization environment remains challenging — not least due to iOS 14 concerns — there remain both organic and paid customer acquisition avenues available.

If we can help you optimize growth, let us know.