Wondering what Apple’s new privacy enhancements mean for you?
Watch our on-demand webinar iOS 14 & IDFA Changes: What you need to know

Quietly rolled out by Apple on March 29th, 2018 with their iOS 11.3 release, SKAdNetwork is an API that validates advertiser-driven mobile app installs. In Apple’s documentation, it’s stated that SKAdNetwork’s objective is to help marketers to measure the success of an ad campaign while maintaining user privacy.

What’s different about the SKAdNetwork API?

SKAdNetwork is a class that belongs to the StoreKit framework; Apple’s In-App Purchase Payment System that manages transactions for In-App Purchases. After installing the app, Apple shares only 5 items with the advertiser: ad network ID, transaction identification, ad campaign ID, app ID installed, and attribution code to link all. 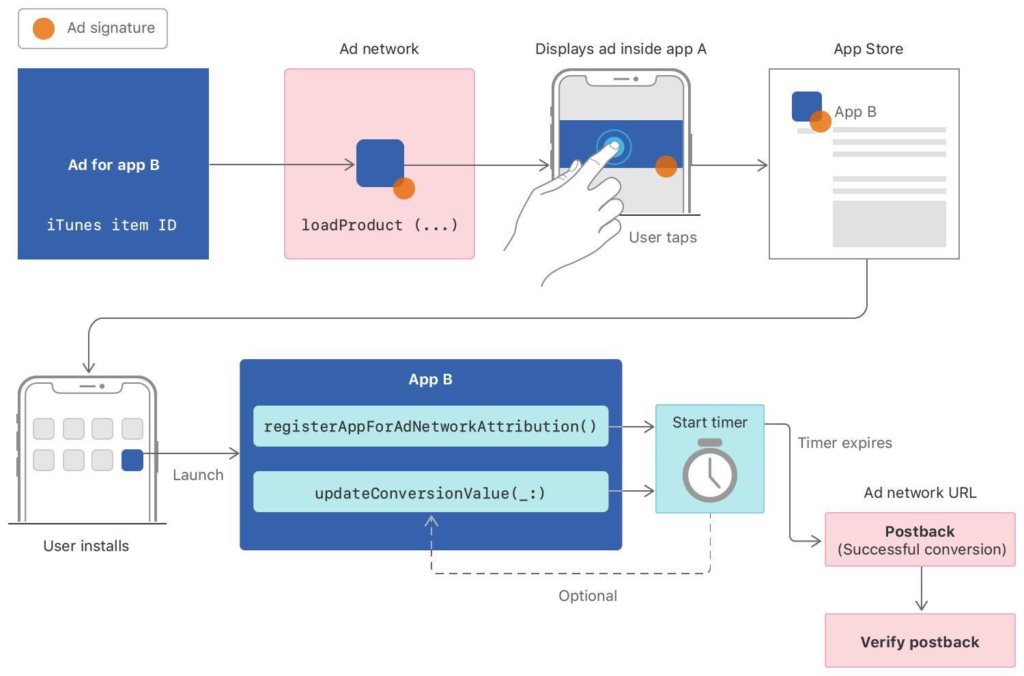 There are two key postbacks associated with SKAdNetwork:

What does this mean for advertisers?

It’s still too early to predict how SKAdNetwork will play out. Adding to the mystery, Apple has been very hush-hush about their motives and the rollout of SKAdNetwork. However, we think there are a few possible ways this could play out:

One possible scenario could be that Apple doesn’t actively push SKAdNetwork to advertisers, resulting in minimal adoption. In this scenario, there wouldn’t be any significant change in the way that app marketers manage their attribution.

2. Apple pushes SKAdNetwork and Google follows suit with their own version.

Another scenario is that Google follows suit with its own version of the ad network API. This scenario could play out a few different ways:

3. Apple pushes SKAdNetwork but Google does nothing.

In a third possible scenario, Apple could actively push SKAdnetwork to advertisers, while Google doesn’t follow suit with their own version. This would still result in complexities for advertisers who would need to manage attribution programs in silos across different OSs.

In this scenario, marketers would turn to attribution providers who could help them gather data from multiple sources, standardize it, and aggregate it into a single ROI dashboard.

So what’s going to happen?

It’s unfortunately too early to say, but one thing is clear: Apple wants to enhance users’ privacy. Apple has clearly positioned itself as a top privacy-conscious company and will continue to hold this stance as data privacy becomes more top-of-mind in the industry.