Today is Data Privacy Day, and Apple has released a huge amount of new information about what it’s doing around privacy, transparency, and how iOS 14 will give people unprecedented control over which apps and services can collect and share their data. Now we know that the very next iOS 14 beta (14.5) will include the App Tracking Transparency pop-up requirement, and the next full iOS version will release it to the public. That’s probably a March time-frame.

All of this is huge.

And a lot of it settles major debates in the industry.

Fingerprinting and ATT on iOS 14.5

Starting with iOS 14.5, Singular will not support probabilistic matching or fingerprinting.

For us, the writing was on the wall.

We knew it last summer. We said it again, and again, and again … including in this blog post about 10 ways to get your app banned from the iOS App Store. Instead of wishing that fingerprinting would stick around and investing in something fundamentally flawed from a privacy standpoint, we treated fingerprinting as a “dead man walking” and decided our best investment was to put our full weight and innovation behind SKAdNetwork.

As a result of that decision, we are offering our customers the most advanced SKAdNetwork solution in the market. Coupled with Apple’s intention to keep evolving SKAdNetwork, we wholeheartedly believe marketers will continue to drive effective user acquisition and growth for their businesses on iOS 14 and beyond.

We’ve already launched SKAdNetwork integrations with major partners like ironSource, Snap, Vungle, Unity, Liftoff, and more, and are continuing to roll out new integrations weekly. Thanks to Facebook’s recent announcements and Google’s update from a few days ago, we know we’ll be ready to support our customers there.

The upshot: Singular customers can be assured that they will be fully able to measure iOS conversions via SKAdNetwork on all major platforms.

Today, however, Apple laid it out in black and white, once and for all. 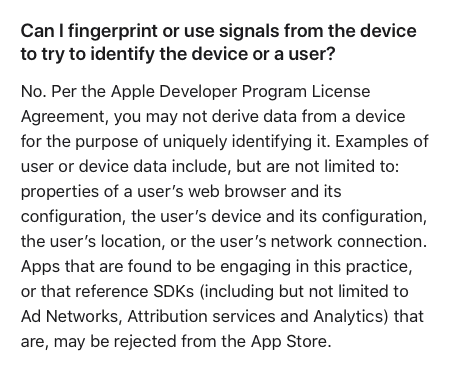 Up until today, some companies in our space thought that they would be able to use fingerprinting to provide mobile attribution services without an IDFA and without asking users for tracking permission via ATT. While we immediately adopted and built a solution around SKAdNetwork, some continued to build device graphs and data marketplaces.

Today, clearly, that all ends. (And you’ll see announcements from all the industry players who are finally admitting that. In some cases, those announcements are a complete 180-degree turn from previous statements.)

Another huge update for app marketers is that SKAdNetwork, Apple’s solution for privacy-safe deterministic mobile attribution, will now include view-through attribution (VTA)!

Singular was the first mobile measurement partner to adopt SKAdNetwork, and we’re fans of the concept, but we can’t ignore that SKAdNetwork 2.0 clearly has some drawbacks still. One of the most notable gaps in the first version was the lack of support for view-through attribution. Getting it back is great news for marketers and publishers alike. Apple’s language suggests that marketers will be able to measure creative performance, which is also new and exciting.

It’s still unclear exactly how SKAdNetwork will implement impression tracking, and how Apple will verify that publishers aren’t just reporting fake “impressions” to SKAdNetwork and therefore stealing attribution credit. I envision there might be some secure container that ad networks must use to show ads, and Apple may also start to verify viewability.

It’s also unclear whether this VTA support will work for all types of ads (e.g. text). We assume it will, but it’s not entirely clear since the text specifically highlights video, audio, and interactive ads.

Finally, Apple shared their plan on introducing “private click measurement,” which is a concept developed as part of WebKit’s ITP. Interestingly enough, Apple plans on using it to enable more private measurement for “app-to-web” flows.

Today the “app-to-web” flow is easily measured with UTM params, but is not as private. Apple’s will fortify this data flow as well, and it’ll have a big impact on web analytics software that will have to adapt in order to capture users that come from a mobile app.

Perhaps most importantly: Apple is listening

But there’s something much more important than just getting view-through attribution back in today’s announcement, or getting 100% clarity on fingerprinting.

Apple’s announcement means that Apple is listening. Listening to the market. Listening to marketers. Listening to app developers and publishers who need to let the world know about their offerings.

That matters, because it means that while Apple is not going to compromise people’s privacy for marketing purposes, Apple does care that the publishers, brands, and companies that do business on its platforms are able to continue their operations.

There’s a lot more to talk about

Keep tuned to the Singular blog over the next week. We’ll be updating with additional insights on fingerprinting, SDKs, ATT, SKAdNetwork, and the role of MMPs.

Interested in learning how Singular can help you stay privacy-compliant and grow your business in a post-IDFA world? Talk to an expert.