Apple Search Ads attribution is changing in iOS 14, but not in the way you think. ASA doesn’t use Apple’s new SKAdNetwork mobile attribution framework. And no, it’s not iAd anymore either. But yes, Singular does integrate with Apple to bring app install attributions from App Store search, Apple News, and Apple’s iOS Stocks app.

AdServices is the new iAd

“Apple Search Ads, starting with 14.3 but really coming into effect in 14.5 … released a new way to measure Apple search ads attributions,” says Jonathan Chen. “They are self attributing, although they’re a bit different from the classic Facebooks and Googles where they’re server-side based.”

But it’s different, primarily because Apple Search Ads is an Apple first-party product with only first-party data between Apple and its customers: iPhone and iPad owners. 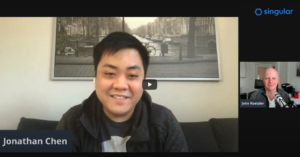 Apple Search Ads attribution used to be managed by iAds, of course. The old iAds framework comes from Apple’s acquisition of Quattro Wireless way back in January of 2010: an eternity ago in the fast-moving mobile marketing ecosystem. It was discontinued as an actual app ads network in 2016, but still served as the base technology powering Apple Search Ads Attribution.

In its place is the new AdServices framework from Apple, which is intended to phase out iAd.

Apple explains it this way:

Singular’s latest SDK and server-to-server integrations support the new AdServices framework as well as the end-of-lifed iAds technology. They are fairly similar. AdServices supports marketer data requirements for creatives, view-through attributions, and re-engagement. Marketers will get all installs, click timestamps, and so on.

The data you get includes:

And, of course, since Singular not only gets attribution data but also spend and campaign data, that data will be matched with spend data from the Apple Search Ads API, including spend by campaign and keyword.

Important note: because Apple considers this first-party data, even if people opt out of App Tracking Transparency under SKAdNetwork, you still get some data. In fact, quite a bit of data.

“Even for users that opt out or don’t even get to the ATT prompt you still get some information about a potential Apple Search Ads attribution,” Chen says. “What is the main difference between an opt-in and opt-out user in terms of that attribution decision? The only difference right now is that for opt-out users you won’t know the click time.”

Essentially, AdServices attributions exist in a parallel universe to SKAdNetwork. And that has some implications.

“When ATT enforcement happens, you’re going to have partners and MMPs integrated with SKAdNetwork and getting attribution decisions there,” he adds. “But in parallel, you … will be getting Apple Search Ads attributions because they are separate platforms and products.”

That means that you can have scenarios where a mobile app user gets attributed to another ad network — let’s say Facebook — as well as Apple’s AdServices. They could, for example, view and even click on a Facebook ad, but also click on an Apple Search Ads ad before finally installing. Then you will have two partners claiming the install, and there’s no real way to dedupe those results.

Are you looking to make sense of all the changes in iOS attribution, and the likely coming changes on the Android side as well? Singular’s huge number of integrations and commitment to privacy-safe mobile attribution is helping the largest mobile publishers on the planet.

See how Rovio prepared for iOS 14 and SKAdNetwork with Singular.