Titans of adtech # 2: is consolidation good or bad for marketers?

All other things being equal, the best number of ad partners you can have is one.

One partner to manage, one dashboard to review, one set of campaigns to manage, one ML model for your ad budget to train up into the highest possible peaks of efficiency, one bill to pay, one set of numbers to inject into your CAC and LTV calculations, and only one thing to occupy perhaps the most precious resource of all: your mental desktop.

But, of course … not all other things are equal.

One ad network does video better. Another offers influencers. Another captures high-intent customers near the point of purchase. Another shares your name, logo, brand, and story to the 95% of people who are not actively looking for what you offer, but will need it in the future. Yet another hits a particular geo stronger, or a demographic that you can’t efficiently access elsewhere. One or two are obvious choices, but create a single point of failure and make your business entirely dependent on them.

So what is the right number?

And, is adtech consolidation good for you? Is the ongoing flood of acquisition in mobile adtech good for marketers?

We laid out the details recently: the emerging titans of adtech are on massive multi-billion buying sprees.

ironSource has collected Upopa, Supersonic Ads, Soomla, Luna Labs, Tapjoy, Bidalgo, Supersonic Games, and Aura. Liftoff and Vungle are being smushed together by their common owner, private equity firm Blackstone. Vungle had already acquired AlgoLift, GameRefinery, JetFuel, and TreSensa. AppLovin has perhaps been the most significant Monopoly gameplayer of all, lining up Lion Studios, MAX, SafeDK, Machine Zone, Adjust (which previously bought Acquired.io), and MoPub in its trophy case of capabilities. Digital Turbine bought AdColony, Fyber, and Appreciate. Even Unity, whose ad business, though growing, is a sideshow to its core business of enabling digital creativity, has collected Applifier (GameAds), Playnomics, and DeltaDNA. And InMobi, which I didn’t profile in my initial Titans of Adtech post, has acquired Appsumer, Pinsight Media, AerServ, plus Roposo, and — a little farther back — companies like Metaflow Solutions and MMTG and Sprout.

“Customers really are going to want to have fewer, more scaled partners that can do a range of things for them, from helping to identify and build their audiences; keep them engaged; monetize them depending on what that mobile experience is; providing real time analytical feedback so they understand how to tune both campaigns and the mobile experience itself. And so I think there’s going to be a growing desire to have more solutions underneath one partner’s overall platform offering.”

Another factor that the entire industry has been aware of since iOS 14.5 dropped in mid-2021: aggregating more and more first-party data under one roof to build audience targeting capability. And that’s only going to accelerate. InMobi CEO Abhay Singhal says we’re going to see more change in the identity, data, and content space over the next period than we’ve seen over the last one to two years, which is a big statement for those of us who have lived through this recent period of massive upheaval.

Part of that change is continuing to seek more first-party data to boost ad yield, according to what Zynga chief product officer Scott Koenigsberg told me in an as-yet-unpublished interview for my TechFirst podcast. Zynga, of course, bought Chartboost for that very purpose, among others.

“If we can combine that data — our first-party data and behavioral stuff and contextual stuff — with what Chartboost does on the monetization side … we can theoretically get to better ad yields and provide better experiences for our players.”

Ad yield is good for all publishers that monetize via ads: it’s essentially the amount of revenue you earn from ad placements.

But is that all there is to it?

Adtech consolidation: the positives and negatives

The bottom line question is this: what’s good (or bad) about mobile adtech consolidation from the point of view of a marketer?

Here’s a quick overview of my current thinking, which I’ll follow with some more detailed thoughts.

(Did I miss something? Ping me with your thoughts.)

The reality is that mobile marketers need multiple ad partners. Most need to use the default choices: Facebook, Google, and for iOS, increasingly, Apple Search Ads. But the industry needs strong counterpoints to those true giants of adtech, and that can’t happen without significant industry consolidation.

In addition, one area where I hope that adtech consolidation can really help is by improving the efficiency of what is currently an insanely complicated task of matching an ad with a human eyeball across the open ad buying ecosystem. You’d think it’d be fairly easy, but in many cases, it’s the exact opposite, as ad fraud specialist Augustine Fou shared recently on Twitter in an image representing the auctions and transactions that occur before a typical ad impression. 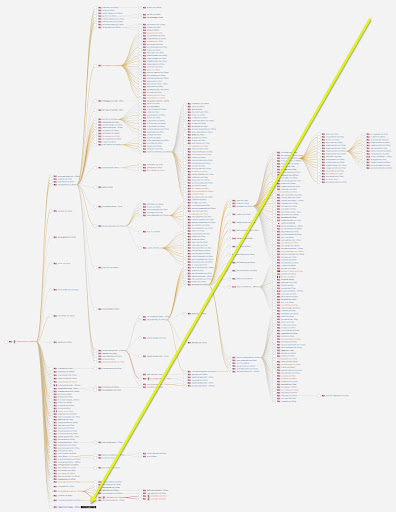 The number of auctions, exchanges, bids, and steps an ad impression goes through before it actually gets sold and delivered is frankly shocking. It’s theoretically much simpler on a platform or content fortress like Facebook or Google or Reddit, but there are complexities there as well.

(Sometimes I wonder whether knowing the cost of the electricity that adtech as an ecosystem uses would induce a similar outcry to the one we’ve seen in opposition to the cost of running cryptocurrencies, blockchain, and web3 applications.)

My hope is that consolidation could solve some of this as well.

One of the perennial challenges of a complex and fragmented ad ecosystem is the death by a thousand cuts that each advertiser’s dollar faces when running this gauntlet. According to a 2020 study by ISBA (the Incorporated Society of British Advertisers), only 51 cents out of every advertising dollar reaches the publisher who shows an ad to a human being (you hope!). The rest is eaten by agency fees, DSPs, SSPs, and a variety of other adtech bits of flotsam and jetsam that we’ve decided are essential to running a modern marketing campaign. 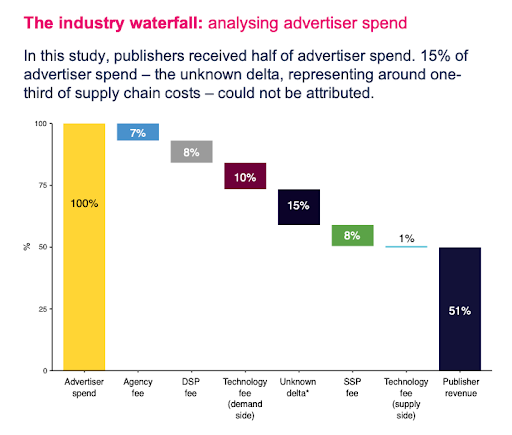 It’s very likely that all those bits and pieces contribute value. It’s also very critical that every advertiser’s dollar does the work it has been deployed to do.

One of the hopes I have for adtech consolidation is that fewer of those dimes, nickels, and pennies will be siphoned from advertisers’ budgets as larger companies build more efficiencies into products and components of the targeting, bidding, and placement processes. That might be a fool’s dream: more efficient titans of adtech might simply choose the better-for-them alternative eat up those extra pennies themselves, adding to their profit margins.

And competition will limit this.

Finally, while complexity exists and it impacts how growth professionals drive results, at least marketers can create simplicity where none exists. Singular basically emerged from the need to create a consolidated view of all campaigns, all spend, all results, all in one place, from the massive complexity of the mobile ad stack. That’s a single pane of glass for performance data and ROI across all your channels, which does help alleviate significant pain points and complexity in managing growth campaigns.

If you need some help with that, book some time.

If you’re getting something worth thinking about on the Singular blog, why not subscribe to our newsletter?