Marketing analytics grew 9,400% in a decade. Have we hit peak analytics?

Did we hit peak marketing analytics in 2021?

I am a big fan of Scott Brinker and his amazing, awesome, even frightening marketing technology landscape. Starting out in 2011 with just 150 logos, his martech landscape has grown to be the “Martech 5000” … even though it currently has over 8,097 companies in 49 different marketing technology categories. I guess you can’t rename it every time the world bubbles up more marketing analytics, social media, and salestech companies. 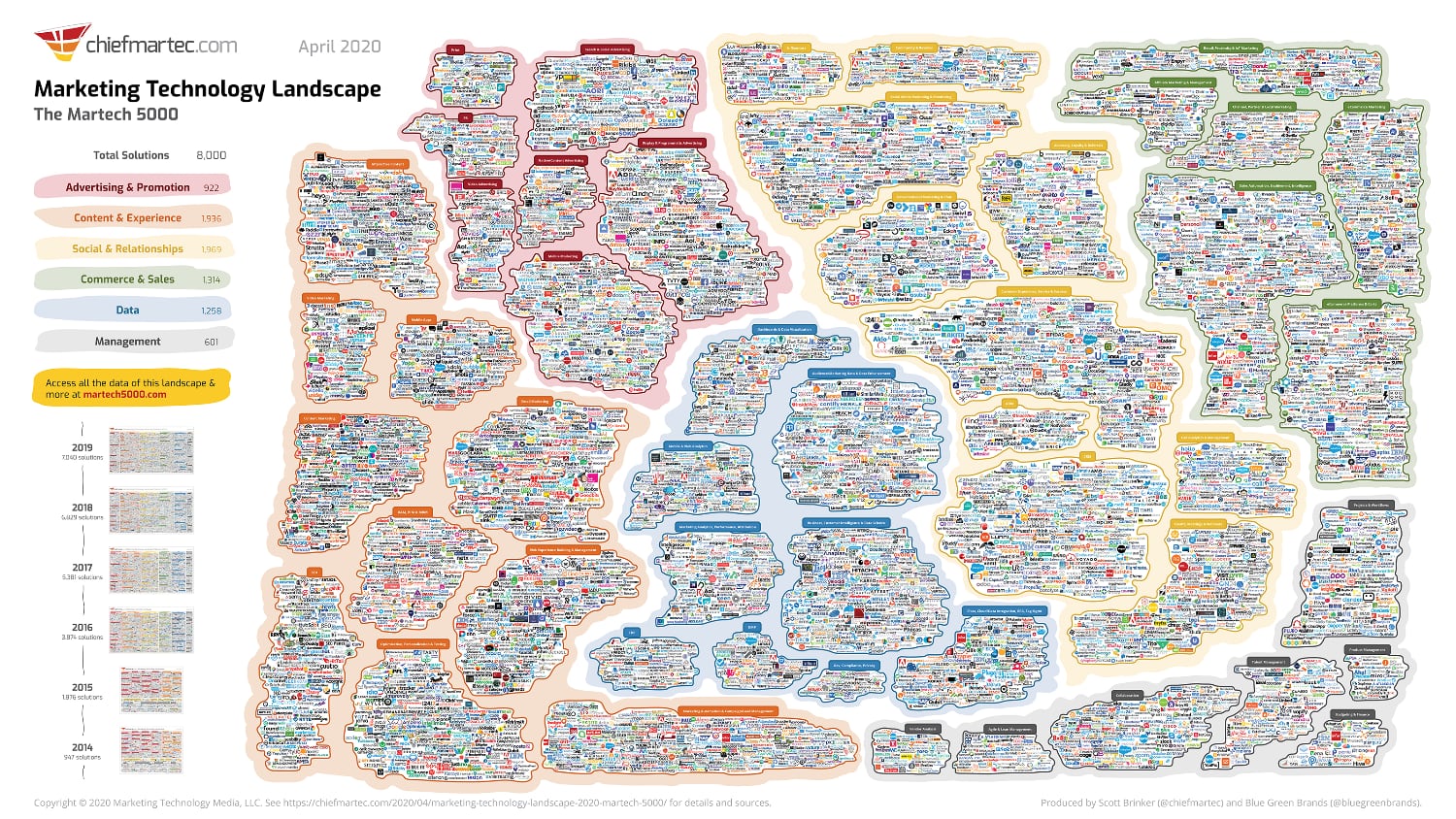 Brinker has run a number of marketing startups as CEO and CTO and is now VP Platform Ecosystem at Hubspot. (Talk about inventing your own perfect position!) He’s been asking whether we’ve hit peak martech yet since at least 2018-2019 and hearing louder and louder calls that marketing analytics and adtech consolidation is inevitable for at least four or five years now.

But let’s look at the data, and then some of the market movement.

Martech and marketing analytics have both grown massively and astonishingly over the past decade. Shockingly fast to shockingly large numbers, in fact. If we just look at Brinker’s martech landscape, we see a 5,300% increase in martech companies from 2011 to 2020: 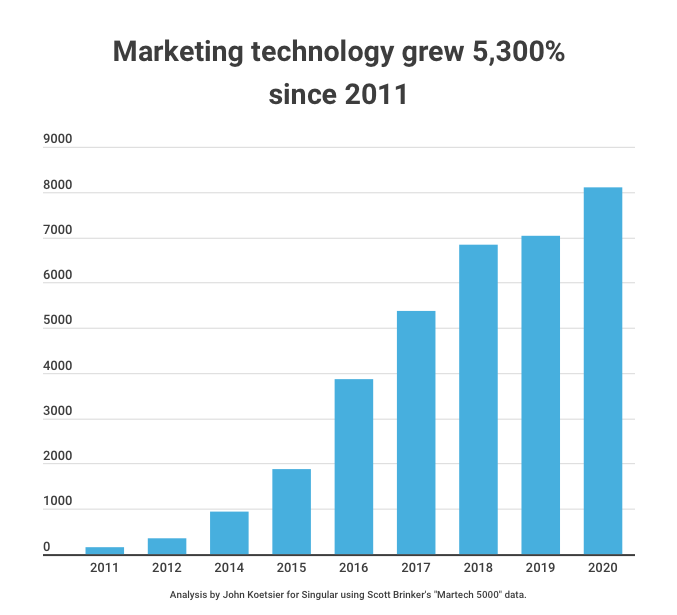 It’s actually surprising to look at the very first marketing technology landscape from 2011. Mobile marketing literally had only nine logos, and AdMob and Localytics are the only two that I recognize from the list. There were three creative optimization companies — three! — and also three choices for personalization technologies. And yet there are some names peering out at us from the dim mists of the tech and marketing industry’s dusty, almost-forgotten past that are still massive and successful companies today: Kenshoo, Shopify, Salesforce, Hubspot. 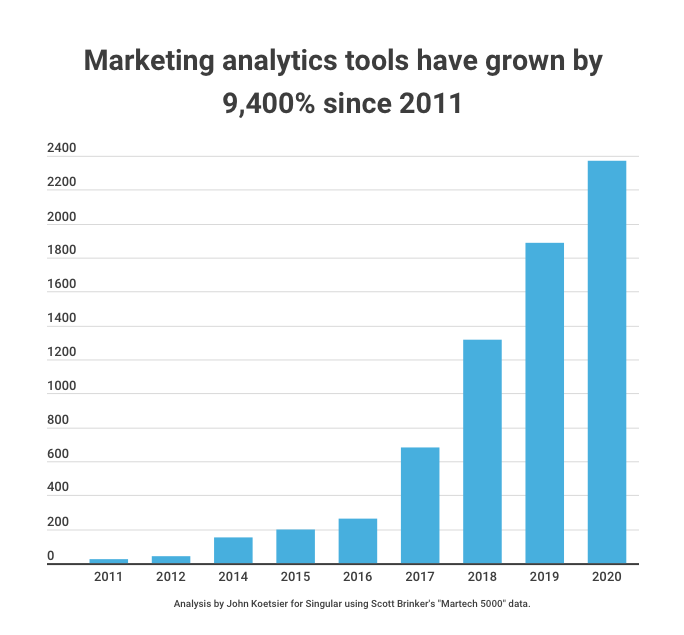 Now, a couple caveats on this data.

First of all, Brinker’s data is probably the best in the industry, but Scott would be the first to admit there are always more companies that he hasn’t seen, or haven’t raised their hand to be counted. Secondly, there isn’t one category in the Martech 5000 or any of its marketing technology landscape predecessors that is labeled “marketing analytics.” Instead, I’ve cobbled together these numbers from a variety of categories such as Business Intelligence, Data, Analytics, Marketing Data, Testing & Optimization, Predictive Analytics, Web and Mobile Analytics, and Marketing Automation. Not all of them appear every year, as the number of categories grows from 43 to 51 and then subsides back down to 49 over the decade, and the actual names of the categories change fairly significantly as our collective understanding of what marketing analytics and marketing technology evolved over time.

However, I think it’s directionally correct.

And actually, if you think about it, it’s actually undercounting reality.

As it stands the Martech 5000 has over 8,000 solutions in six uber-categories and 49 subcategories. But do you think there’s a Commerce & Sales app that doesn’t include some kind of marketing analytics function? Or a Social & Relationships tool that doesn’t reference growth, numbers, and likely activity from paid campaigns?

I tried hard to only keep solutions that are explicitly related to marketing analytics in the numbers above, but the truth is analytics are everywhere tools are. Especially when it comes to martech and adtech.

What does this mean? Is marketing analytics ripe for consolidation & aggregation?

It’s pretty tempting to say yes. And there’s data that suggests we are in a time of marketing analytics consolidation and aggregation.

As we recently wrote, Vungle has bought four companies in nine months and has its eye on more potential acquisitions. Digital Turbine bought Fyber and AdColony, Applovin bought Adjust, and there have been more billion-dollar mobile marketing acquisitions in this spring than in the past few years combined.

Emotionally it feels so as well.

One early reviewer of the 2015 martech landscape diagram said it gave her anxiety. Another called it terrifying. And Brinker’s been asking if the growth is sustainable for six years. But sheer mental terror at the sight of thousands of logos that we don’t recognize, representing an industry which we’re supposed to be experts in, revealing how much most of us didn’t have a clue existed, is not by itself reason to suspect we’ve hit peak martech, or peak marketing analytics.

More compelling, however, might be a role reversal. Marketers have long been accused of shiny object syndrome when acquiring new tech. That might not be so true anymore …

“Forget shiny object syndrome. Martech chases marketers more than the other way around.”

But something else has happened that has shaken up the whole world of mobile marketing, which — by the way — in Venn diagram terms is much nearer to all of marketing tech today than it was a decade ago. All the channels — social, search, email, you name it — are getting subsumed into the Uber-channel: mobile. 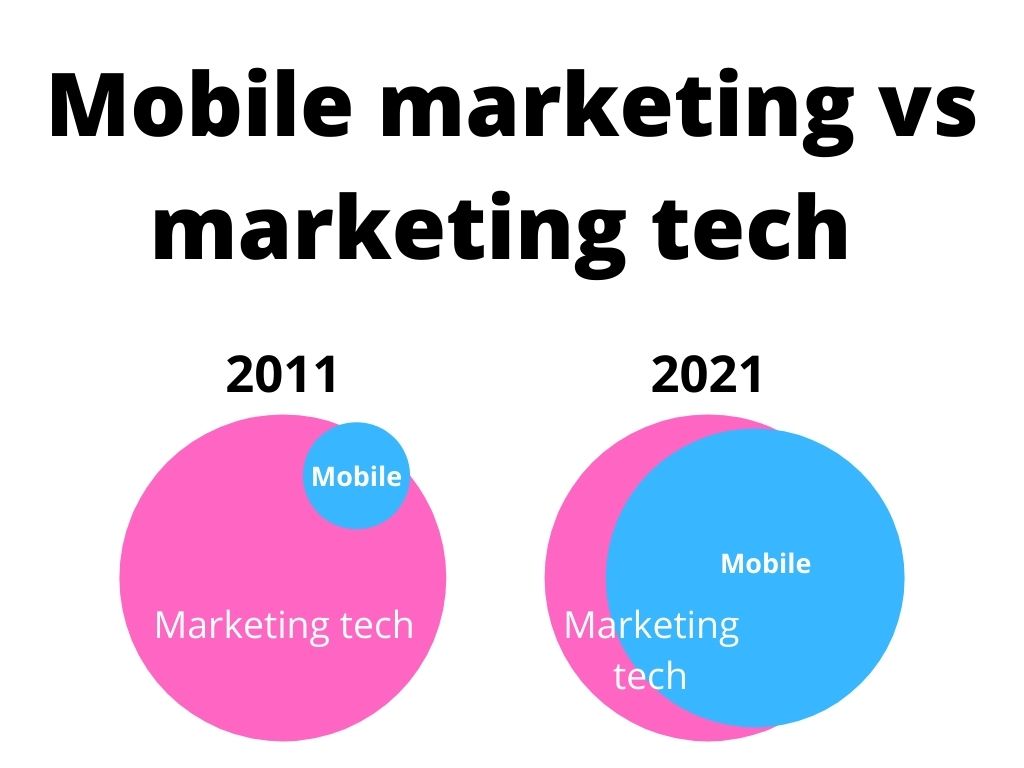 That something is broadly the privacy revolution and specifically iOS 14.5, which have conspired to make marketing measurement harder. And that makes consolidation competitively better as first-party data becomes the only data market players feel like they can fully rely on.

So … does this all mean peak marketing analytics?

(Sorry if that’s a disappointment after this whole blog post.)

Consolidation? Sure? Continued acquisitions and mergers? You bet.

But let’s be real. The cost of doing a tech startup just keeps getting lower. A little bit of code, AWS or Google Cloud or Azure for deployment, some WordPress for a website, and you’re in business. APIs and SDKs bring in all the functionality you need; tools that you need to integrate to ingest client data make everything more integratable than at any point in software history.

And, we just had a massive market shock with Apple’s App Tracking Transparency in iOS 14.5. Which should kill off some of the old school tools. And which will in turn kick off a massive and renewed surge of innovation. Most of which will fail, of course. (I’m an angel investor, but I’m a realistic angel investor.) But some of which will do interesting things. And some others of which will be bought and rolled into bigger tools.

So I think innovation will continue. The pace may slow, and there will continue to be consolidation at the top of the food chain.

But there’s likely to continue to be ongoing innovation at the bottom as well. Times of great change and great uncertainty tend to be very fertile for disruptive startups.

Get the one mobile marketing analytics platform you need

While you’re here, book a chat with a Singular expert on the one mobile marketing and mobile performance analytics platform you need, with cost, revenue, ROI, attribution, ad monetization, deeplinking, and native connections to more platforms than anyone else.