Apple has announced significant new privacy and attribution features in a massive update of developer news at WWDC.

One that’s critical for app developers, publishers, and marketers: App Privacy Reports in iOS 15. Others that are extremely interesting is a new way of aggregating postbacks in SKAdNetwork, plus new privacy updates in Safari and Mail, Apple’s native Mac apps for browsing and emailing.

But perhaps the most significant is SKAdNetwork postback aggregation, which has the ability to dramatically impact how SANs (self-attributing networks) operate.

One thing that always seemed odd to me about SKAdNetwork: postbacks were only sent to ad networks, which would then have to find a way to get it to advertisers. Most are reputable, and many use 307 temporary redirects to get the postbacks immediately to Singular as independent third-party verification and aggregation … but it still seemed weird.

Why not send postbacks to advertisers, who can then check their media sources’ homework?

“Starting in iOS 15, devices can send a copy of the winning install-validation postback to the developer of the advertised app,” Apple says. “Developers opt-in to receive the postback by specifying a server endpoint in their app’s Info.plist.” 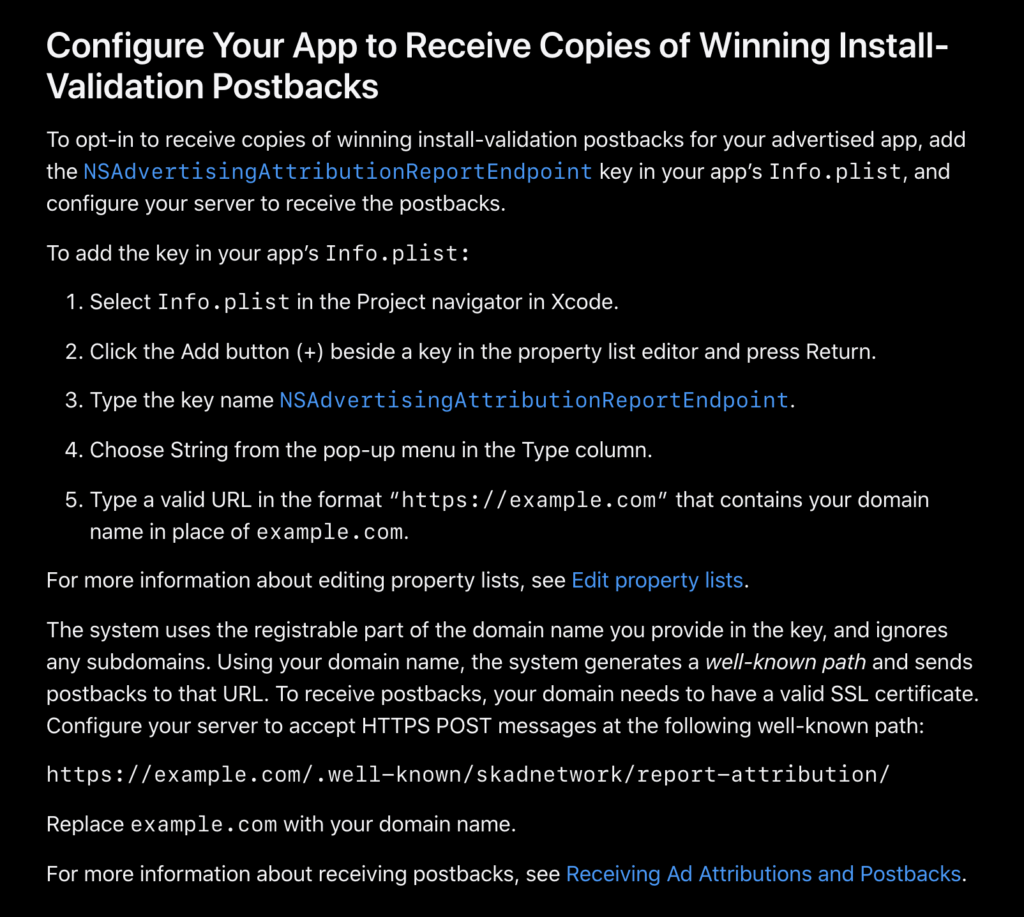 App publishers and marketers can now configure a single catch-all collection point to receive “a copy” of all SKAdNetwork postbacks for your app. In other words, your ad network is still getting a postback, but you’re getting one too. Superficially, that’s great: you can check your ad networks’ and media partners’ numbers. Singular, for instance, can be the aggregation point, interpret your conversion models, aggregate all your postbacks from all your partners and all your apps, and you can see everything all in one place.

But there’s something even more significant happening here.

Getting postback copies directly from Apple allows marketers to get more direct data than ever before on the results that SANs generate.

Self-attributing networks, of course, have always held tightly to their data, and rightly so. They have deep reservoirs of data about who does what with regards to ads on their platforms, and there are significant privacy implications for sharing that data. Now, while still anonymous, advertisers can directly check SANs’ homework for the very first time. SKAdNetwork is anonymized data, but it is also deterministic data. Once privacy thresholds are met, you’ll be able to see what happened from which partner for which app, regardless of who the partner was: small indie mobile ad network, or Facebook, or Google.

One important note: advertisers will get raw SKAdNetwork postbacks in iOS 15.

That means the conversion payload still needs to be decoded and enriched with data from the relevant ad networks and then displayed effectively so that marketers know both what they achieved and what to optimize in future campaigns.

(Singular, of course, does this already, and will continue to do it in iOS 15.)

Apple has long had a privacy report in its Safari browser on desktop Macs that tells you what trackers are trying to follow you around websites, and how many trackers each site has. Tom’s Guide, by the way, has no less than 81 — at least how Apple defines trackers — while The Wall Street Journal has 76, and Bloomberg has 65.

But soon iOS 15 will bring this kind of transparency to apps in an App Privacy Report: 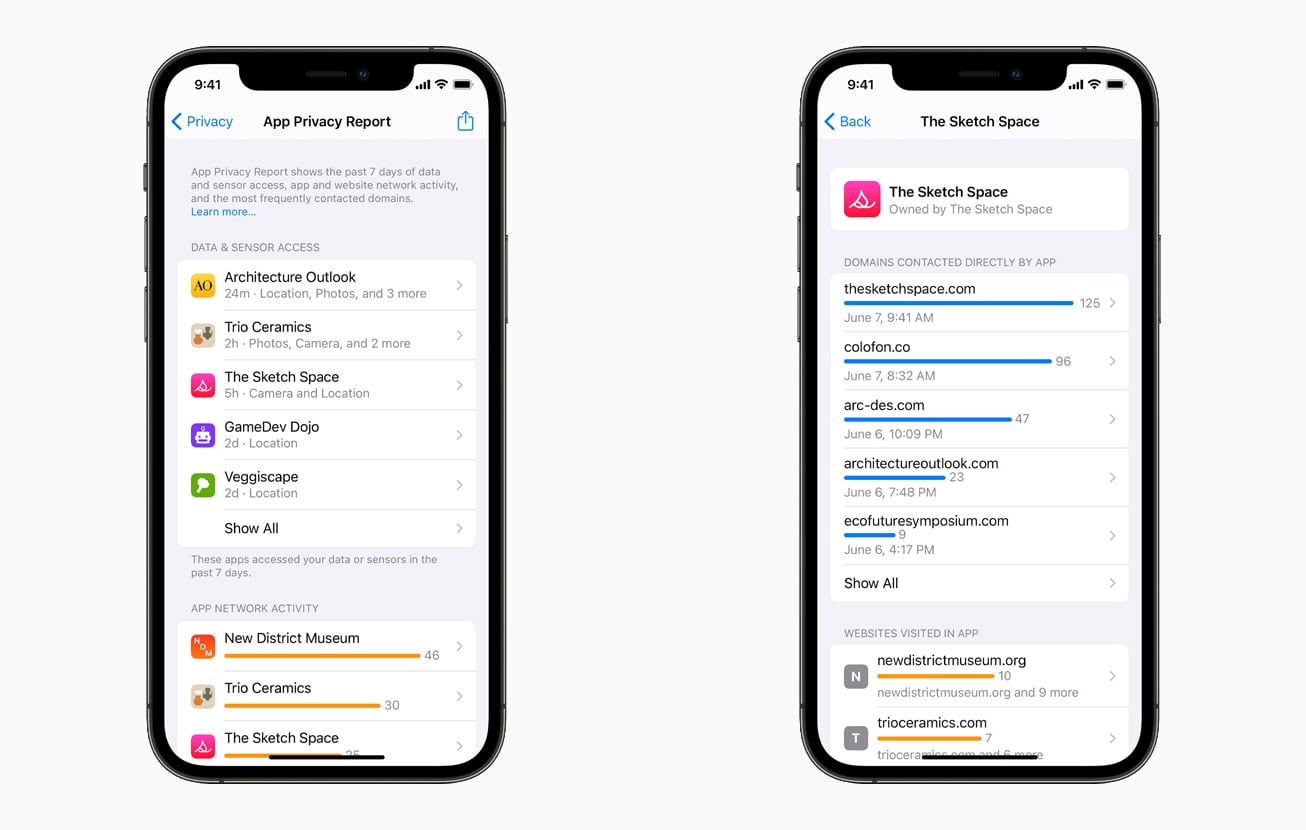 “With App Privacy Report, users can see how often each app has used the permission they’ve previously granted to access their location, photos, camera, microphone, and contacts during the past seven days,” Apple says. “Users can also find out with whom their data may be shared by seeing all the third-party domains an app is contacting.”

In other words: there’s no more room to hide.

In iOS 14, app publishers had to provide a “nutrition label” privacy report when updating their apps. In iOS 15, people are going to get the opportunity to see for themselves if the nutrition label is accurate.

While most people may never dig down into their phone’s settings to check their App Privacy Reports, I guarantee you that some will. And if they don’t like what they see, uninstalls will follow. In addition, journalists will be trolling these reports for anything that looks fishy.

Apple’s Mail app on iOS 15 and Mac OS Monterey will block tracking pixels, stopping companies and people from knowing if the recipient of their emails opened it, and masking their locations. Safari’s ITP, Intelligent Tracking Prevention is growing new muscles and will be blocking IP addresses from trackers, making fingerprinting harder if not impossible.

In addition, Siri will be processing data on-device, and iCloud+ will come with a built-in VPN — as long as people use Safari and Mail — meaning that web traffic and email will essentially be invisible to marketers.

(Singular’s privacy-safe web-to-app measurement functionality will continue to work regularly given it is leveraging URL parameters, which Singular is using to tell marketers where an install came from and what campaign it’s part of. We don’t use any invisible pixels or other email tracking. Plus, of course, it’s all first-party data, not shared with anyone else.)

Change is the new normal

For mobile marketers who are just settling into SKAdNetwork now: yes, more change is coming. This is the industry we’re in, and change is not just the new normal, it’s our normal.

For now, however, take a deep breath.

iOS 15 was just announced. It won’t launch until the fall, probably in September. We have time to prepare, and we’ll use it. If you’d like to have a quick chat with a Singular expert about SKAdNetwork, privacy-safe attribution, and maybe even iOS 15, book some time here.