Privacy checkup: Limit Ad Tracking up 216% on iOS, but down 85% on Android

The percentage of people who have switched Limit Ad Tracking (LAT) on has doubled on iPhone over the last four years in the United States. Over the same time period on Android, it’s shrunk by a factor of six or seven.

In other words, people on the two major mobile platforms are moving in opposite directions. 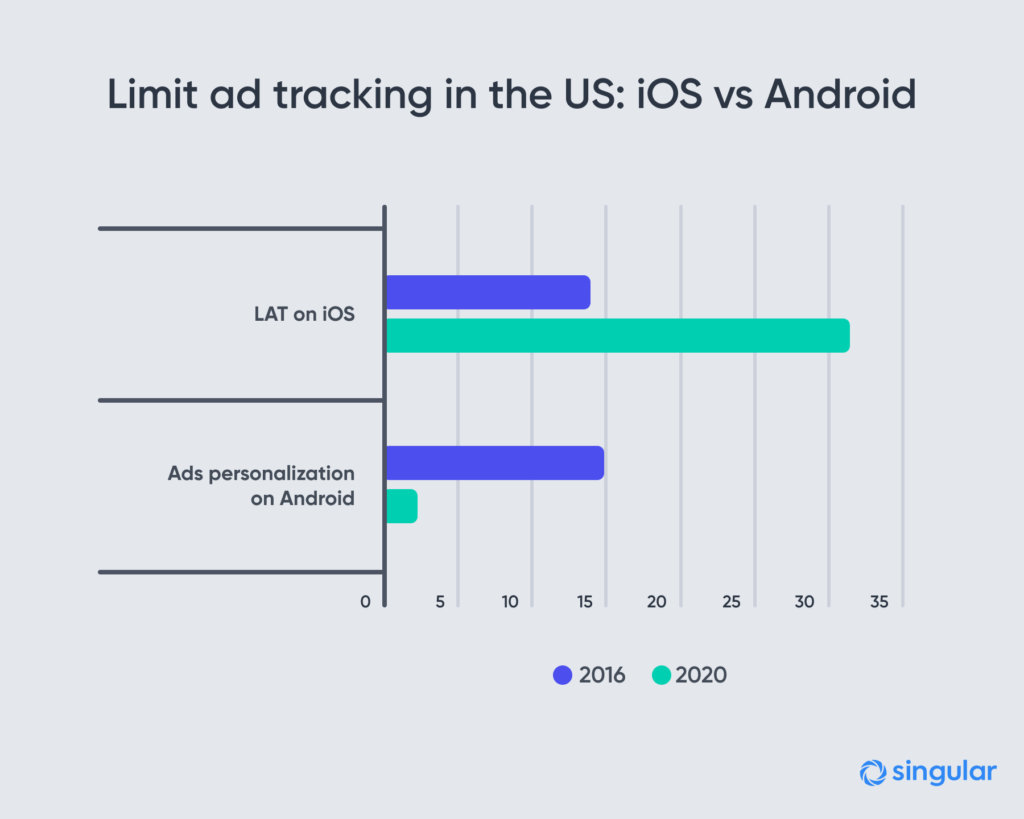 Limit Ad Tracking is a setting on Apple’s mobile operating system that prevents marketers from seeing and tracking customers or users by their device-specific Identifier for Advertising, or IDFA. On Android, clicking to opt out of interest-based advertising or ads personalization accomplishes the same task.

Back to the future: Limit Ad Tracking

When I last studied LAT levels, it was 2016. Interest in ad blocking had just exploded. And Limit Ad Tracking, which Apple introduced in 2012 and Google implemented in 2013, was also of interest to mobile users who were increasingly concerned with privacy.

That year in the U.S., 11.4% of iOS users had turned LAT on, limiting the data that they provided to advertisers. On Android, 25.3% of Americans had switched off ads personalization, which accomplishes the same purpose.

At Singular, we recently analyzed a 390-million-device slice of the last 90 days of global data to determine changing views on privacy and advertising. And wow … they are apparently changing. 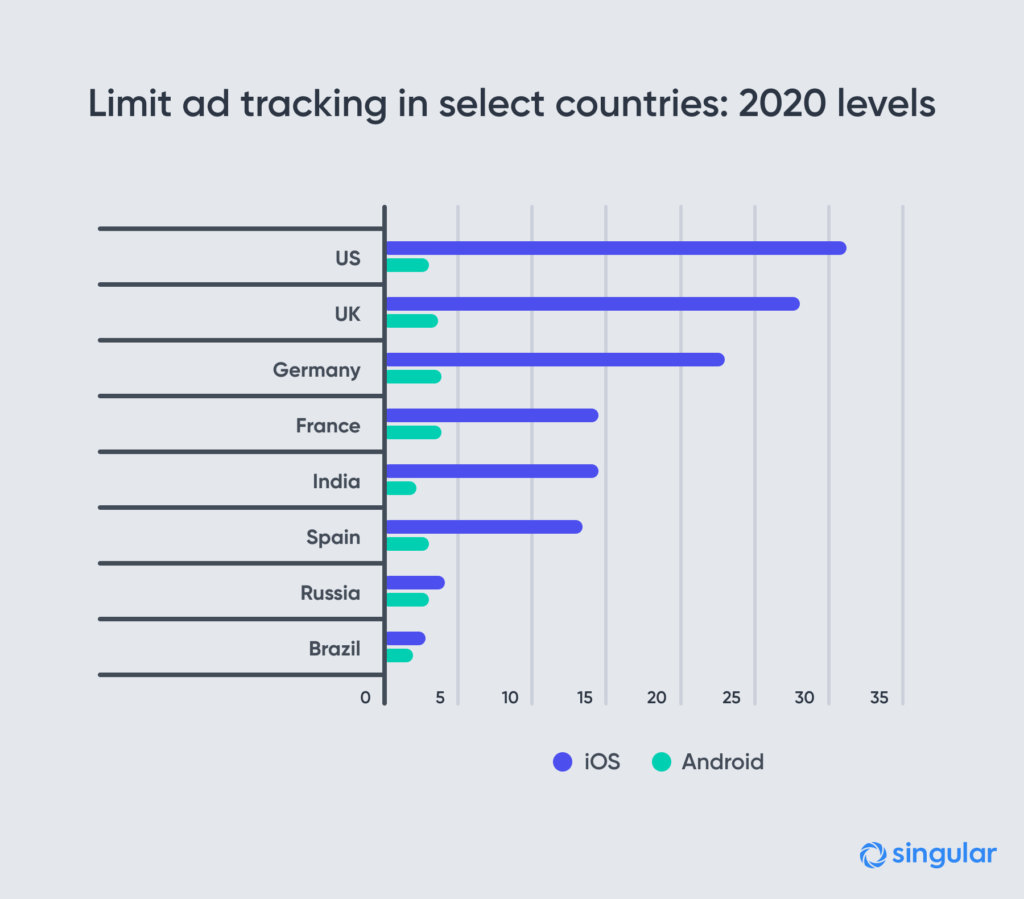 iOS vs Android, country by country

In the UK, almost 28% of iPhone owners have Limit Ad Tracking on. But just under 3% of Android smartphone owners have chosen to turn ad personalization off. In Germany, long known for its strong stance on personal privacy, 22.5% of iOS devices in our dataset had LAT on, while only π number of users — ok, yes, it’s 3.14% — on Android have enabled the similar setting.

This is apparently a global phenomenon: up on iOS, down on Android.

There, the number of people enabling privacy-enhancing settings on their mobile devices has decreased on both major platforms. Russia was 13% for iOS and 27% for Android in 2016. Today it’s almost the same for both: 4% and 2.8%.

The one constant in 2020? Disabling ad tracking is always higher on iOS than Android.

Four years ago, the reverse was true. The average rate of disabling ad personalization on Android in 2016 was just under 20%. On iOS, the global average was almost half, 11.5%. Now, every major country we looked at has reversed that split. Overall, iOS is 15.61% globally, and Android is at 2.2% globally.

The iOS numbers are actually not surprising or shocking.

People are increasingly concerned about privacy and worried about the risks of releasing personal information. As a result, it’s no surprise that the California Consumer Privacy Act of 2018 went into effect this year, after a continued public outcry.

In addition, Apple has been beating the privacy drum as a competitive advantage for some time. The company moved to block third-party cookies on the Safari browser just this week. It’s no accident that Singular has been preparing for a post-IDFA world for quite some time, and it’s no accident that iPhone owners are more attuned to a privacy-centric vision.

But the Android numbers are definitely a surprise. To drop from higher than iOS to lower than iOS and reverse a cultural shift is puzzling.

Perhaps Google is doing a better job of helping Android users understand their privacy options, and how the company’s advertising ID can be used to deliver more relevant ads, or a better overall experience on Android. Perhaps the vast growth of Android bringing in close to a billion new smartphone owners on a global scale over the past four years has tended to focus on people who are less concerned about privacy. And perhaps the bigger ecosystem of phones and models and manufacturers in the Android world lends itself to new devices that don’t necessarily incorporate all the settings that prior models had enabled.

Ultimately, this needs more research before we can be sure about what’s happening here.

A few caveats and details

I’ve checked with a few other industry analysts like Thomas Petit and Eric Seufert. The iOS numbers we’re seeing here are basically in line with data that Petit and others are finding as well: a general global increase over the past few years.

For Android, I’m not seeing good data from other sources to corroborate or conflict with the findings from this almost 400-device dataset. (If you have such data, let me know!)

One potential concern with the data could be that advertisers and/or networks are excluding devices with ad personalization turned off from their campaigns, knowing that they’ll present tracking limitations. That would, of course, result in under-reported data and incorrect findings. So we double-checked attributed conversions in Singular data to surface any differences between paid and organic traffic.

In other words: we re-checked to see if the data changes when we collect it via an ad campaign versus a natural, organic conversion.

Very interestingly, ad personalization off for Android was actually LESS for organic and MORE for paid traffic. The same was true for turning the Limit Ad Tracking on in iOS: less for organic, more for paid.

Ultimately, we’ll need to do more research to understand what’s happening here, but for now, the upshot is this:

Americans are now among the world’s most privacy-sensitive consumers, at least on iOS. And Android users are now less likely to turn off ads personalization than any time I’ve ever seen in the past.