Interested in testing the waters in the Chinese mobile ecosystem?

China is almost literally a different world for mobile developers. Its size is unique: 989 million internet users out of a population of 1.4 billion. Its digital advertising market is massive: $80 billion in 2020 and with growth between 20-25% over the past few years, almost certainly higher in 2021. By some reports China accounts for 40% of mobile app spending. And its isolation is unique: the great firewall of China has very specific requirements for the apps and services that it allows in, and prevents much of the outside tech world from entering.

And as a top-10 country in terms of smartphone penetration with little of North America’s and Europe’s legacy of desktop/laptop computing, almost all of China’s digital market and internet penetration is mobile. In other words: China is both a massive opportunity and a significant challenge.

And that means that anyone looking to enter this market needs to carefully take stock: what works in China? How can you successfully enter the market?

A quick look at the top 10 apps right now in China highlights some of the key differences. 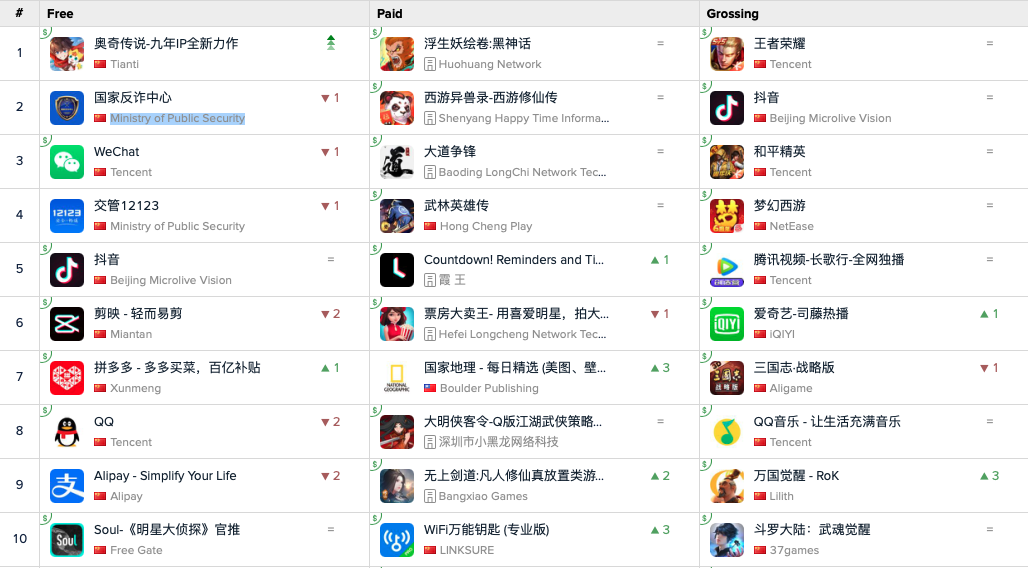 QQ, WeChat, Alipay, Taobao, Baidu, games from Tianti, and an anti-fraud app from the Chinese Ministry of Public Security highlight some of the top apps right now in China. Along with, of course, Douyin, the Chinese version of TikTok which is owned by the same company, ByteDance, and multiple games and apps from Tencent.

The hottest categories are Messaging and Videos, according to China Internet Watch. Almost every single person who has a smartphone in China uses messaging apps, which have a combined 99.2% penetration. Videos on China-equivalent versions of YouTube and Netflix have almost 94% penetration, and payment apps — almost essential for everyday life in a Chinese city — have an also massive 86.4% usage rate. (Payment apps are so essential the New York Times has said “don’t even try paying cash” in China.

Mobile is such a key part of life that virtually everyone needs a set of apps just to navigate everyday life. Helpfully, The Helpful Panda shares a list of the key ones, along with their Western equivalents.

WeChat of course, stands on its own.

The platform famously invented mini-apps which load virtually instantly and do everything from payments to small games to food delivery shopping to social networking. Launched in 2017, WeChat’s mini app count reached over 500,000 with over 170 million daily active users within just a year. Now WeChat’s mini apps manage an incredible 1.1 billion transactions every day for over 440 million people.

There’s so much you can do inside WeChat that some of its users spend more than four hours a day inside the WeChat ecosystem, transacting all the business they need to do, ordering all the products they need, managing whatever services they consume, and communicating with whoever they need to. On average, WeChat users engage with about 10 mini apps regularly.

That doesn’t mean Chinese app users don’t need additional apps, or that they don’t download full-size apps. It does mean that if your service only requires something small and lightweight, you should look at a WeChat app as an option.

Clearly, however, if you’re making a full-on gaming environment, Chinese mobile users are interested. Half of the top 10 grossing apps in China are games, including Honor of Kings, a multiplayer online battle arena game published by Tencent.

PUBG, Overwatch, Gardenscapes, Clash Royale, and Clash of Clans are examples of western games that have made it in China, so it’s definitely possible.

But entering the Chinese app market may not be easy.

Everything is different in China. Cloud services that you might want to use in your app may not be available. Authentication schemes you typically use via social login are different, and the ones you’re used to might be available inside China.

Planning to let people log in via WeChat? It’s pretty critical, as it’s the one app most Chinese people can be counted on having. But you’ll need permission, and you need to be Chinese to get that permission. Most of the independent Android app stores — nope, there’s no Google Play in China, unless you’re VPN’ing in — have their own app listing and permissioning processes.

To get traction in China you’ll need no fewer than six separate licenses and permits, says Slator, and you must host in China and operate with a Chinese-owned entity. You also have to manage user data in accordance with Chinese law and work with the right Chinese partners.

Out goes PayPal, in goes WeChat Pay or Alipay.

Oh, and if that’s not enough, app standards and usage differ too. Developers looking to bring their apps into China will want to take into account vastly different look and feel standards, says Minds Studios. That includes an acceptance of a busier look, anime-like characters, and toylike design … even for “business” or professional apps. 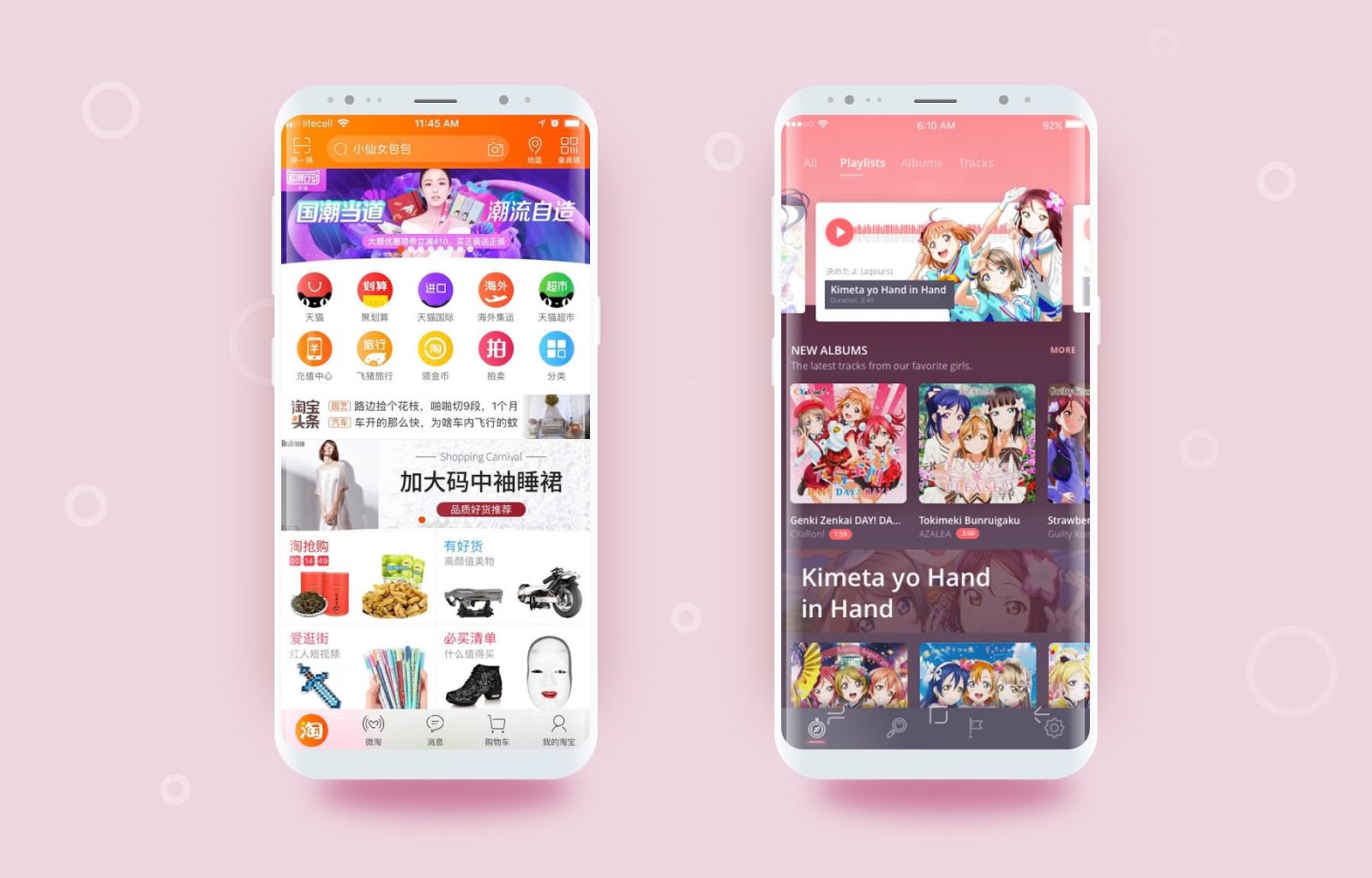 That acceptance of a busy look also means a level of acceptance of complexity. Which makes sense: putting a million mini apps into WeChat does bring a level of intricacy into app navigation and user experience.

“A common theme to must-have Chinese apps is they are a little like an onion, multi-layered. Rather than expecting consumers to hop between one app to research, another to look for reviews and then a final app to make a purchase, Chinese consumers expect to be able to do everything in one place.”

Your app may work just fine in China as is. But more than likely, you’ll need some user interface and user experience surgery to get it just right.

Android vs iOS in China … and all the app stores

Android is clearly the leading platform in China, of course. 76% of smartphones in the country are Android-based, while 22% are on Apple’s iOS. But an iPhone is still a status symbol, and iOS has the distinction of being the platform with a much simple app distribution model: the iOS App Store. Android, of course, is much different. Since the Chinese government has blocked Google services from the Chinese market, Google Play is unavailable except via VPN. That means Chinese consumers have a vast array of app download options.

The top app stores for Android in China are from familiar names according to AppInChina’s app store index. Top publishers and top hardware manufacturers offer the biggest and most popular Android app markets in China:

After the big names, popularity on the hundreds of other app stores in China tails off quickly, and with good reason. The bigger stores from the major brands are much more likely to vet apps on their markets much closely in an attempt to weed out malware.

Everyone takes a cut, says SAMPi:

“QQ, for instance, takes up to 70% of an app’s revenue while China Unicom takes 30%. In addition, each store has its own guidelines and procedures as well as its own government tax and banking rates. Note that government tax and various regulation fees can easily reach up to 30% on top of the app store cut!

Again, the top app stores are likely to have fairly reasonable policies: pick based on the audience you need and the coverage you want.

Localizing your app to China

No-one just comes into China, drops their app into the top app markets, and sits back to collect the cash. Apps require much more extensive localization to China than most other international markets. It starts with language, sure, but it includes picking a Chinese name for your app.

You’ll also need to create Chinese content for your Chinese app, which could mean a significant amount of work for characters and storylines.

Pricing may not seem like a thing that requires localization, except for wealthier or poorer countries, but once again, China is different, Tenba Group explains. Numerology and the cultural significance of different numbers is critical:

“The trick is to use “good” numbers for everything related to values, for example, prices. This may sound trivial to Western consumers but is of the highest importance to Chinese users.

For example, eight is very good, as in Chinese it is pronounced ba (八), which sounds like the fa (发) in “to become rich” ( 发财). On the other hand, you should avoid four, which is si (四). This sounds similar to si ( 死), meaning death. This is why in Chinese buildings, there is often no 4th floor.”

Using QR codes, which Chinese mobile users are accustomed to, and adopting WeChat functionalities in your app will also make Chinese smartphone owners feel at home in your app.

Your marketing needs to be localized too, not just in terms of look and messaging but in terms of where you advertise. Picking the major Chinese social networks — and working with some local influencers who have a huge impact on how their followers perceive your brand — can be incredibly helpful.

Working with the government: bringing your app to China

If you’re going to bring your app to China, you’re going to need to work with the government. And you’ll need to do that via a local partner with boots on the ground and Chinese citizenship and ownership.

Not only does the Chinese government control which apps and which companies are available in China, it is taking an increasingly close look at the role of the tech industry in the country.

China recently fined home-grown tech giant Alibaba a record-breaking $2.8 billion for abusing its monopoly position, and that’s not all. Chinese regulators are also looking at smaller companies, fining English-language food delivery app Sherpa $180,000 for winning “99.8% [of the] daily orders in the English-language food delivery market in the first ten months in 2019,” according to Technode.

Expect to be working with the government.

Expect it to take longer than you think it should.

Expect to have to follow regulations and guidelines, some of which may not be written down.

One piece of good news for those bringing their apps into China: your mobile marketing measurement doesn’t need to change, as Singular offers mobile attribution services in China along with virtually everywhere else on the planet.

Global customers who are looking to add China to the markets they publish in should chat with their Singular representative. We have local people in China who can help you navigate some of the challenges of entering the market.

Perhaps even more importantly, Singular can ensure that all of your marketing efforts get the measurement that they deserve, enabling best-in-class growth optimization in China.

Book some time with us here.