Apple has released their WWDC session on new SKAdNetwork updates. We’ve taken a first look and wanted to share the breakdown of the updates, and our initial thoughts on what it actually means for marketers.

Disclaimer: As of the publication date of this blog post, the actual developer documentation for the SKAN 4.0 specifications has not been released yet, so this first look is based only on the WWDC session, supporting WWDC content, and Apple’s Q&A lounges. Things may change!

Campaign ID now supports up to 4 digits (up from 2). This means up to 10,000 values can be supported for campaigns/creative or other breakdowns. In keeping with this expanded functionality, Apple has also decided to rename campaign ID to source ID to reflect the new intended use. We’ll refer to this as the “source ID” moving forward. 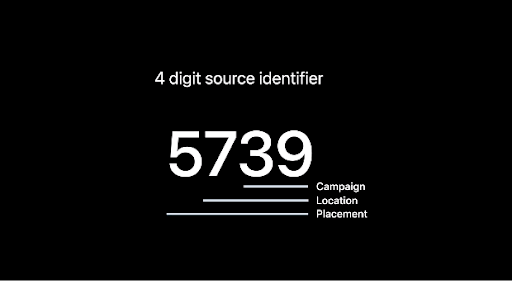 Apple also says that the new digits are subject to 3 tiers of “crowd anonymity” (AKA privacy thresholds). Apple updating privacy threshold behavior in response to the added digits is not a surprise. For now, it looks like high-volume campaigns will get significant amounts of data, as in Apple’s example below: campaign, location, and ad placement.

As an MMP, we’re personally excited whenever we see updates to SKAdNetwork conversion values. After all, extracting as much information from conversion values (we call these conversion models) is the bread and butter of what MMPs do.

Separately, although only mentioned briefly in the session, we spotted a third major change as well:

Apple is introducing a set of “coarse” conversion values that can be 3 potential values, enumerated as “low,” “medium”, and “high”. Both “coarse”and “fine” (the 6 bits we are familiar with today) values are assigned through the same “updatePostbackConversionValue”.

Although “coarse” and “fine” values can both be set, they won’t be available for reporting/postbacks together. Depending on the crowd anonymity (privacy thresholds), you may get no conversion values (low anonymity) at all, “coarse” values (medium anonymity) , or “fine” values (high anonymity).

In Apple’s example, a “coarse” value of “high” and a “fine” value of “42” has been set as the conversion value.  In a similar fashion to source IDs, depending on the privacy threshold met, either no conversion value, the value “high” (out of 3 possible values), or the value “42” (out of 64 possible values) would be sent in the SKAdNetwork postback.

Alongside “coarse” conversion values, Apple introduced more conversion insights in the form of “multiple conversions.” Simply put, Apple will now support sending three SKAdNetwork postbacks, a significant improvement from the single one that is sent today.

Postback 1 will arrive in 0-2 days, postback 2 will be 3-7 days, and the third SKAN postback can arrive as much as 35 days after an app install.

This is also another big change to postback timer mechanisms. While initially vague on details in the session, it was verified in the Apple Q&A lounges that all 3 postbacks will follow strict postback sending windows (0-2, 3-7, and 8-35 days). This is a change from the behavior today, where calling updateConversionValue would effectively delay the SKAN postbacks past 24 hours, to try and encode more information. With the new postback timer logic, you can only delay until the upper bound of the window for the respective postback number. 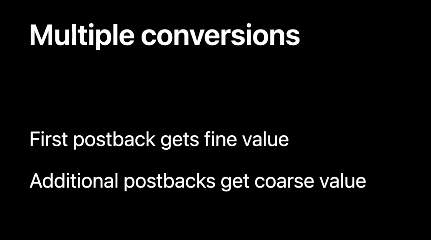 There is one important detail of the additional postbacks — postbacks 2 and 3 get only coarse conversion values! 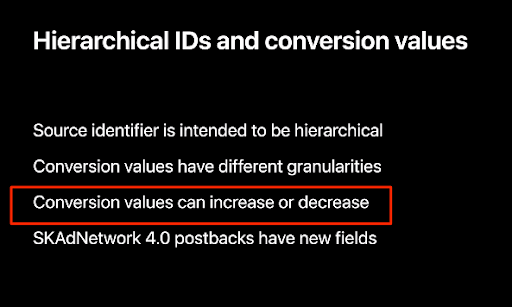 Our takeaways and open questions:

This announcement cannot be understated. Since SKAdNetwork 2.0, lack of web-to-app measurement has been one of the biggest non-addressed use cases that caused marketers to scratch heads to find a solution for.

To quickly recap, SKAdNetwork is now supported for “clicks” (no mention of “views”) leading to the app store for “first party sites” and “embedded cross site iframes.”

There’s quite a bit to unpack here both in terms of how it works, as well as the impact to broader strategies on iOS marketing and measurement, so we’ll have a separate post about web to app support and what it means for us all.

Last but not least, Apple added a few new features to aid in testing, including: As an MMP, we’re particularly excited to play around with the postback testing functionality. At this point, we only have fairly sparse details, but we’d like to learn more about:

Much, much more to come

It’s still very early days in terms of SKAdNetwork 4.0 details, and there’s a lot more to learn, share, build, and test. Although there is no mention of when 4.0 will be released (only mentions of “Later this year”), we’ll be keeping an eye out for more information.

We’ll be posting much more on this in the next few weeks.