Ad spend on TikTok jumps 75X from May to November

There are space shuttles and there are rocket ships. And then there’s TikTok.

TikTok has grown an amazing 614 million users this year, according to SensorTower. The social network that’s basically a hybrid of Vine and YouTube is now closing in on 1.5 billion users. That’s serious scale — and serious growth. We haven’t seen that kind of growth since perhaps Pokemon Go, which exploded in 2016 and captured 750 million downloads in a single year.

And some of us never expected to again.

The reality is that when you grow an ad-supported social media platform by more than half a billion users, you’re probably going to grow ad revenues too. In fact, you better … because supporting all those hundreds of millions of new users is going to cost some cash.

Based on data Singular is seeing, TikTok has done just that.

And is well-positioned to continue growing ad revenues significantly for the foreseeable future.

In fact, TikTok ad spend by Singular customers has jumped 75X between May of this year and November. (Singular optimizes well over $10 billion in annual ad spend for customers like Lyft, Nike, Rovio, LinkedIn, Airbnb, Twitter, and many others. So we have good visibility into where top advertisers direct their dollars.) 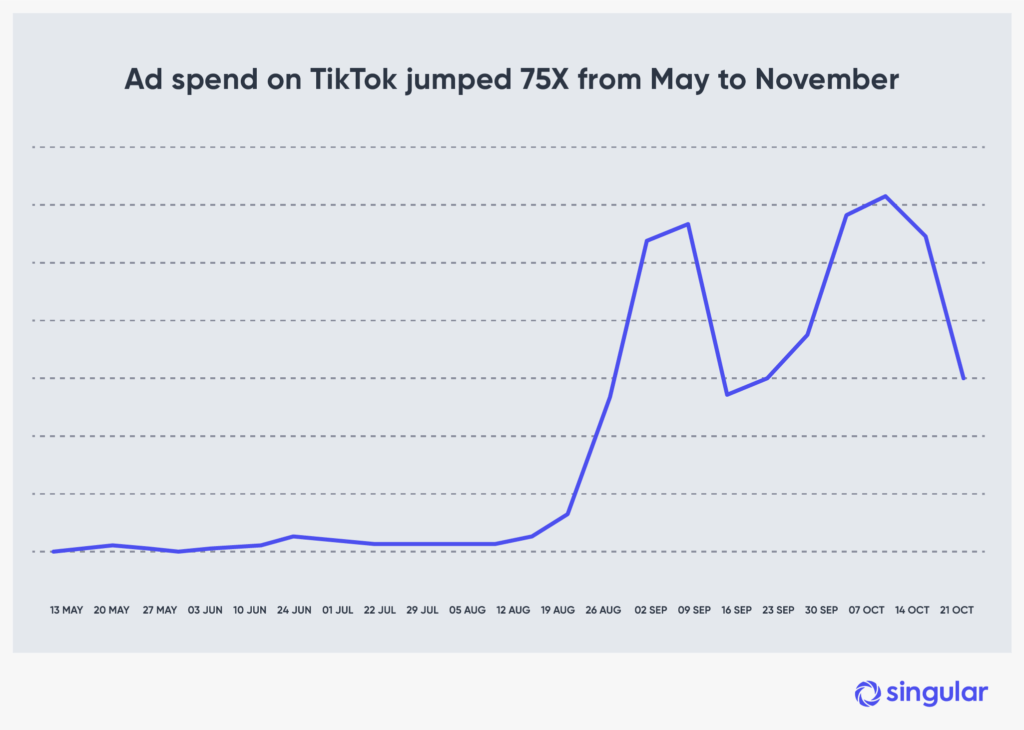 At the beginning of the year, we saw very limited spend.

The company has been growing fast, however, and in June, TikTok quietly showed plans for a self-serve ad model to select clients. It’s still early days in those efforts, and TikTok will very likely be continuing to iterate on efforts to make it easier for advertisers to build campaigns on the platform. (TikTok, by the way, is integrated with Singular for analytics, attribution, and ad monetization.)

One advertiser I talked to said that he’s “pretty impressed with how quickly they’ve built up the platform,” but that sometimes the speed shows. In other words, there are occasional glitches.

But clearly, whether it’s difficult or easy to access, TikTok’s audience is simply too large to ignore.

And, since 41% of TikTok users are between 16 and 24 years old, it’s the young audience that advertisers crave, because they can drive trends. (Caveat: that stat is from January of 2019 … the average age has almost certainly skewed older as Gen-Xers pile in to find out what the young-uns are doing these days anyways.)

Still a lot of room to grow

To add context, in the beginning of the year ad spend on TikTok was easily less than 1% of advertisers’ combined spend on Facebook and Google. By August and October, TikTok was running between 3-5% of spend on those platforms.

It’s still a small fraction of what you see on those leading and well-established platforms, but there’s clearly room for more. Ad load — the frequency at which users see ads — is about 22% on Instagram, for instance. That means for every 5 pieces of content, roughly one of them is an ad. And, Facebook is testing higher frequency in Stories. On TikTok, however, the current ad load ranges from a similar high of one every five videos down to a low of one every 20, @mattcatbat, a Tiktok user with over 450,000 followers, told me.

That high-water-mark is not common, in my experience. In my personal testing — yes honey, all that time on TikTok is actually work — I’m seeing very low ad loads … definitely on the low end of the scale.

Which, very simply, means that as TikTok ramps its self-serve platform and other features for advertisers, there’s a lot more potential for growth.

In spite of the platform’s massive growth, it’s early days still on TikTok. 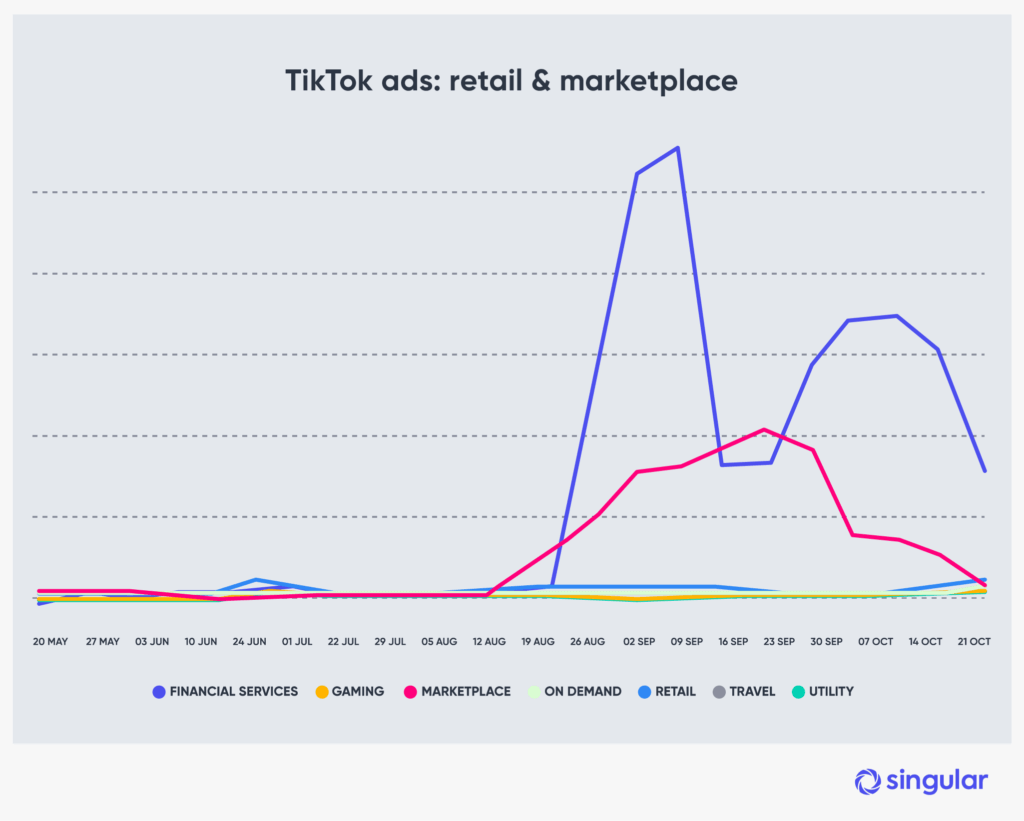 We see retail taking the lion’s share of the ad spend on TikTok, along with marketplaces. Retail makes perfect sense: you’ve got a young and presumably fashion-conscious audience on TikTok. These are people who are likely to be influenceable with the latest trends and fashions, and they’re incentivized to purchase.

Markeplaces is a category at Singular into which we put customers who are looking to acquire at least two sets of platform participants. A classic example would be an on-demand food delivery service. These services typically want to acquire both customers (food buyers) as well as delivery personnel (drivers), and probably also food providers (restaurants).

Many of these brands have similarities to retail.

Essentially, they’re looking to add buyers: end-user customers. But TikTok also has a large audience of young adults — some of whom drive — and who probably need a bit more disposable income. So many marketplaces could conceivably add service providers here as well.

But that doesn’t mean that no game publishers or fintech companies are active on TikTok. Quite the opposite.

Fintech and gaming: on TikTok?

In fact, one advertiser I talked to is advertising on TikTok for his fintech company.

They haven’t made their content especially TikTok-friendly, but they’re still seeing similar returns compared to other platforms. This suggests two things. First, investing in making content that is more TikTok-friendly should boost engagement and likely also conversions. And second, advertisers in verticals that have a preconception that TikTok would not a good fit for them … should reconsider and test the platform.

Another advertiser I chatted with had similar results in the gaming vertical: not great, but similar to other channels.

One benefit here: since the younger demographic that TikTok specializes in is not on Facebook and might not be accessible via Google either — other than via YouTube, perhaps — TikTik could be accessing a whole new audience for your app or brand.

Of course, you’ll need to do your incrementality testing.

But you may find that you’re accessing a previously unreached audience.

Summing up: test away!

There’s a lot of activity on TikTok, and it’s growing fast. As seasoned advertisers know, the greatest opportunity often comes when platforms are young and there’s less competition.

That means you should be diving into TikTok and testing it for your vertical and your offers. If you do in fact reach a new audience and find ways to connect effectively, you’ll reap greater rewards than those who wait.

It is important to note that while we do see a lot of ad activity, our results, very naturally, are biased to our customer set. So it’s not clear that what we’re seeing is completely representative of TikTok’s reality. However, it should be a good indicator.

How Singular can help

Singular is a mobile measurement partner for all the major platforms, and we’re also integrated with TikTok for analytics, attribution, and ad monetization.

Do a demo, and get a free trial of the Singular offering.

We can help you test and measure your results on all advertising platforms, including TikTok.