The mobile marketing industry is just starting to try to get settled with the changes that iOS 14.5 brings to measurement. But we’re already seeing at least one significant undocumented change in SKAdNetwork in iOS 14.6, just out this week. And, concurrently, additional changes in how Apple is dealing with privacy thresholds.

iOS 14.6: IP addresses out of SKAdNetwork

The first change is an undocumented change in how SKAdNetwork functions with regard to IP addresses.

Here’s the original and still-documented flow: postbacks are sent to ad networks (and Singular, with 307 redirects) right from users’ devices (see bottom right). 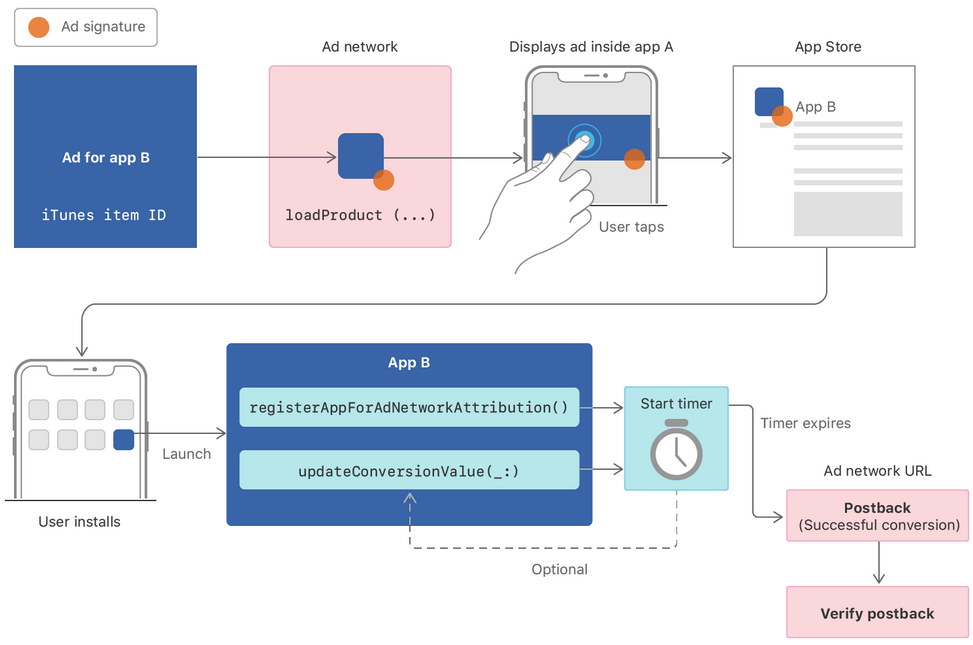 But in iOS 14.6, that flow has a slight change. Instead of postbacks coming from the device, they first go to an Apple proxy server, which then forwards them to ad networks.

“First of all, it means you won’t be getting the device IP address in the SKAN postbacks, which essentially protects user privacy,” says Friedman. “Because previously you could think about how to do fingerprinting based on SKAN postbacks. So now that won’t be possible if anyone was even thinking about that approach.”

The effect goes deeper, however.

IP addresses also enabled geolocation, which gave advertisers a rough idea of what country, at least, an install was in. That won’t be possible anymore: advertisers who want it will need to encode it in their campaign IDs.

One benefit, however: fraud will be harder to accomplish with this new method. Apple still isn’t cryptographically signing the conversion values, but it is taking a more involved approach with the install postback, making fraud tougher.

On May 21 Apple made another significant change to SKAdNetwork. This one is entirely backend and unrelated to the point version update of iOS.

“In short, it seems like they decreased those thresholds or fixed something in the thresholds, causing the advertisers to get many more conversion values than what we’ve been seeing before,” Friedman says. “And we see it across ad networks across advertisers … definitely a pretty significant phenomenon that started just a few days ago.” 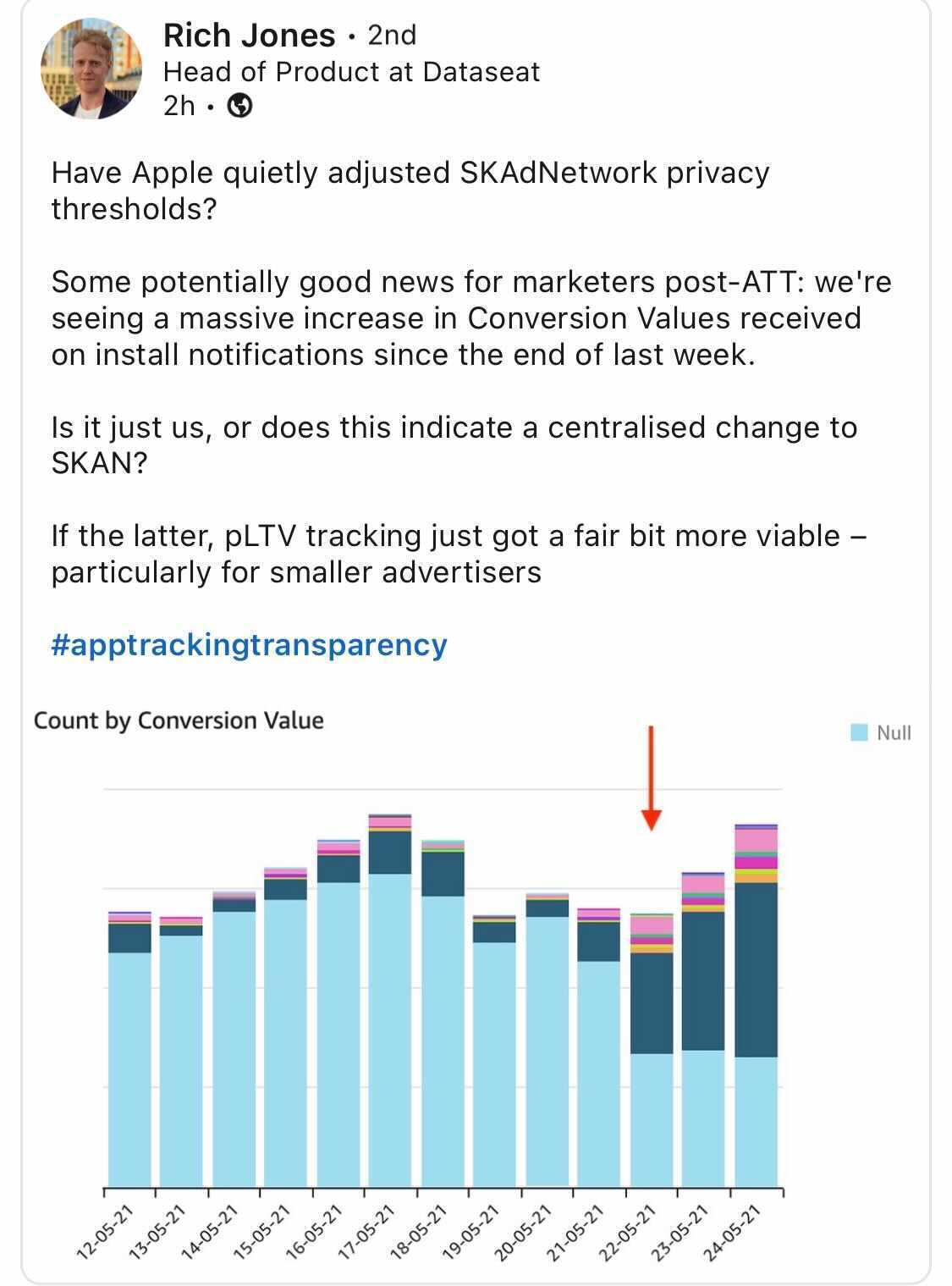 The challenge had been primarily with app advertisers who had fairly low install volume per campaign: something like 20 or 30 installs a day. Friedman dug pretty deeply into the data, and those advertisers are now seeing much more post-install conversion data.

“If you have higher than let’s say 20-30 sales per day … then we see that the change is pretty significant,” Friedman says. “We saw that some campaigns changed from getting 20% conversion values — very low numbers — to 80 or 90% conversion values. So pretty dramatic.”

That’s a big deal, because if you’re subdividing app installs into multiple campaigns to use the full available power (if I can use that term) of SKAdNetwork to encode creative data, geodata, campaign data, or other optimization insights, you’ve been losing the ability to get conversion data.

Now that’s changed, and you’re able to get full conversion information even from relatively low-volume campaigns.

WWDC: What’s next from Apple in SKAdNetwork?

Apple’s Worldwide Developer Conference is coming very soon, on June 7. If there are additional changes to the SKAdNetwork framework, that’s likely where we’ll hear about them.

If Apple does add anything, web to app flows would be nice, Friedman says.

“I think web to app is a big one,” he says. “A lot of the web networks can’t get SKAN postbacks at the moment and I think that if they would announce that something like that, that will be huge.”

If you’re looking for help to implement or optimize SKAdNetwork, chat with a Singular rep. We’ve worked with the best, including Rovio, to help companies maximize advertising optimization capability on iOS 14 and beyond.