iOS 15 is here, and so is Private Relay, Apple’s new privacy-centric technology for the web. How is it going to affect marketing measurement and advertising?

It’s going to hit like a bomb. A soft bomb.

“Opening salvo” are the key words in the above paragraph.

Neither iOS 14.5’s ATT nor iOS 15’s Private Relay and Hide My Email are complete and fully-finished products, frameworks, and services. All will evolve over time.

As marketers and advertisers know, these technologies enhance privacy at the cost of marketing measurement. But thanks to the excessive tracking and data sharing of the recent past, consumers and privacy advocates don’t really care about that price. And even, honestly, most marketers want more privacy. Private Relay achieves that by separating your requests for the stuff you want on mobile web from the place that request goes, essentially by putting in two proxy servers. The inbound proxy gets your request. The outbound proxy relays it to the server, and they shake hands on the way back with your web page or resources.

You’re invisible to the server, and even Apple doesn’t have the full end-to-end picture.

Of course, it’s only mobile web, and it’s only Safari. At least, for now.

The first big question for marketers and advertisers is: how many people will be on Private Relay? The second is: will this eventually be extended to all in-app connections to the internet?

Let’s hit the first one first.

Everyone’s going to be on Private Relay

The plain answer is: almost everyone with an iPhone.

Look, mobile Safari is pretty much the default for iOS users. If you take a peek at Statcounter’s mobile browser market share for North America, you see that Safari has about 49% share right now to Chrome’s 44%, with a few anklebiters like Samsung, Firefox, Opera, and UC Browser fighting for crumbs under the table. 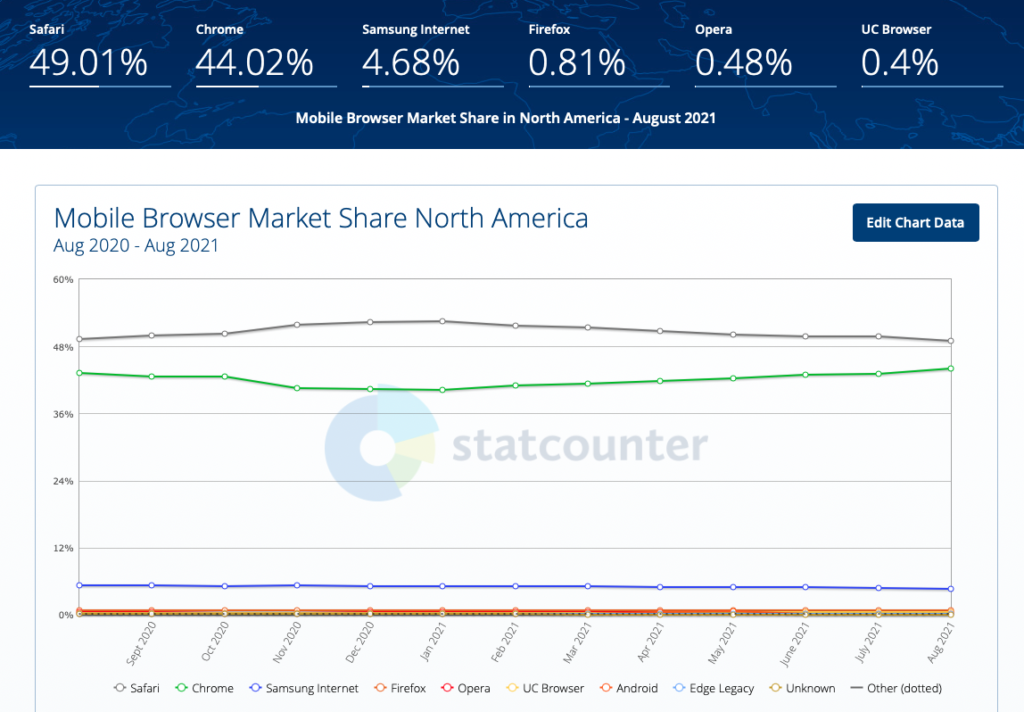 While that percentage doesn’t line up perfectly with iOS market share in the U.S., Canada, and Mexico, it’s pretty close. Basically, if you use an iPhone, you use the browser that shipped with the device. (Microsoft clearly taught Apple everything it knows about default system choices.)

iPhone market share in the U.S., from Piplsay via Asymco: 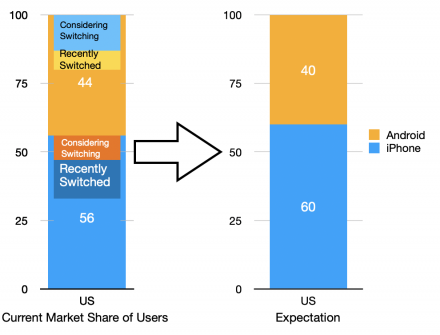 So everyone’s on Safari.

But what about access to Privacy Relay and other privacy features like Hide My Email? They are premium add-ons to basic iCloud, so they’re only for paid accounts. So that will only be a few people, right? Actually, no. Not even close.

The question here is: how many people pay for iCloud+?

A lot of people. In fact, hundreds of millions of them.

“We now have more than 700 million paid subscriptions across the services on our platform, which is up more than 150 million from last year and nearly four times the number of paid subscriptions we had only four years ago,” Apple CFO Luca Maestri said in the company’s June 2021 quarterly earnings call.

Are all of those iCloud+? Probably not. There are, after all, just under 20 million people who pay for Apple TV+. And Apple has some other subscriptions, like the iPhone Upgrade Program: pay a monthly fee to always have the latest and greatest shiny new iPhone.

But most of them are.

Drop your guess wherever you wish, but to me, it looks pretty clear that literally hundreds of millions of people, and likely something near 600 million or higher pay for at least a little bit of extra iCloud space. The base price is literally 99 cents/month in the U.S., and with HD photos and 4K videos and Pro Res, basically everyone with a modern iPhone needs iCloud+.

That means almost everyone, and it almost means disproportionately the most valuable users with the most disposable income.

Sure, there are some caveats (and the bomb is soft)

Yes, it will take some time. iOS 15 will take some months to fully percolate through the iPhone userbase, and yes, right now Private Relay is in beta, is buried in settings, and needs to be turned on manually.

(Plus — you’re right — some Apple customers use Chrome or other browsers.)

Also, there are some countries Private Relay is not available in. Apple doesn’t offer Private Relay in China, Belarus, Colombia, Egypt, Kazakhstan, Saudi Arabia, South Africa, Turkmenistan, Uganda, the Philippines, and Russia. (Those countries, of course, want to see what their citizens are doing digitally.)

But, just like ATT in iOS 14.5 — and don’t forget it was originally scheduled to arrive six months earlier with iOS 14 — Private Relay and other Apple privacy innovations will almost certainly be rolled out to the wider and eventually complete iOS ecosystem just about everywhere else.

And probably become opt-out rather than opt-in.

But you can basically expect most high-value iPhone owners to become less visible digitally.

The bomb part is that almost everyone will be Private Relayed out of visibility. The soft part is that it will take some time. iOS 14.5 took half a year to arrive: much later than promised. The changes that iOS 15 brings for privacy — and the ones that are still coming — will be perhaps just as significant, and impact plenty of different services and parts of the online ecosystem.

So the full impact won’t be immediate. But like iOS 14.5 … those who survive it best are those who prepare for it first.

But what about in-app?

First of all, this isn’t easy. In-app is a much bigger technical challenge at a much greater scope, simply because we spend 80% or more of our device time in apps. That’s a lot of traffic to manage, and there’s a lot of things that could break if Apple does it wrong, or if Apple’s implementation isn’t completely seamless to app developers’ code. Or the user experience could be poor, if the service isn’t globally accessible and state-of-the-art fast.

So it’s not an easy yes.

But I can imagine Apple tackling it, possibly at high-value levels of iCloud+ thanks to the extra costs. And that would be a pretty significant privacy game-changer and marketing measurement milestone. Even if Apple doesn’t, however, my assumption is that Apple will change what metadata can accompany requests and potentially even scramble any metadata that it does allow to break non-privacy-compliant forms of attribution.

What this means for marketers

This will have a number of impacts on mobile marketers and advertisers.

Why yes, we are doing a webinar about iOS 15 and what it means for marketers and advertisers. And yes, you totally should come.