How much do you really know about the effectiveness of where, when and how your marketing dollars are being spent?

Former U.S. Secretary of Defense Donald Rumsfeld spoke these words at a press briefing in 2002 in response to a question about weapons of mass destruction in Iraq. While he didn’t invent this concept of known knowns, it became his most famous line. The title of his memoir is “Known and Unknown,” and Errol Morris made a documentary film about him titled “Unknown Known.”

The “unknown known” is a fourth concept that Rumsfeld defines as “the things that you think you know that it turns out you did not.” How can these four concepts of known and unknown that Rumsfeld applied to national security intelligence also apply to marketing intelligence?

The first step to marketing intelligence is knowing what you have. On the campaign side, you know your impression, click, and spend data for each campaign, ad set, and ad on each media source. On the attribution side you know how many installs, in-app events, leads, or purchases you’re getting.

While these facts can help you gauge some level of marketing effectiveness, there may be issues getting the data frequently enough to make meaningful decisions. Still, these are the facts you know you know.

Knowing what you don’t have is important so that you can embark on a journey to find it. You may have an estimation of ROI, but a true picture of ROI is one of the most common known unknowns for marketers. It requires linking campaign data with attribution data in a marketing intelligence platform like Singular.

An example of a known unknown might be understanding ROI by media source for a subscription-based business. Without unified data, it’s difficlut to know ROI over a long lifetime. Finding LTV over both web and mobile is equally challenging. These are known unknowns that can be solved with the right tool.

The unknown unknowns of marketing intelligence are the benefits you could see by understanding ROI at a more granular level. They are the questions you may not be thinking about off the top of your head, but can answer with the right tool.

In addition, creating custom dimensions such as CPA, ROAS, eCPI, ARPU and LTV by combining upper funnel and lower funnel data can yield unknown benefits. If you don’t already have this data, the metrics are unknown, as well as the benefits of knowing those metrics and taking action on them. The most advanced marketers run A/B tests and experiments to uncover more and more revenue-boosting results. 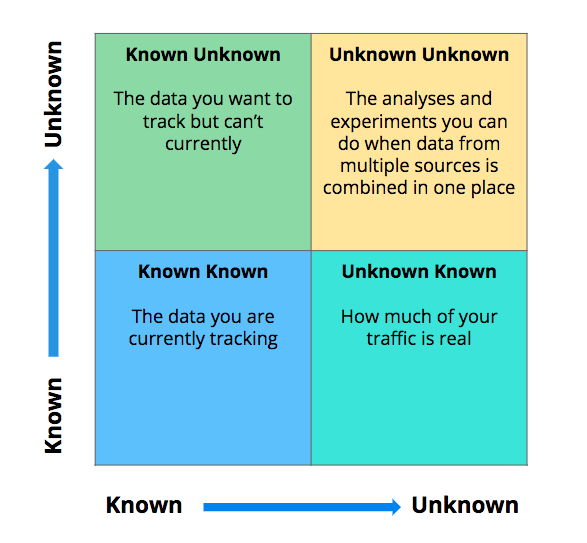 An unknown known (data you think you know but actually don’t) sounds an awful lot like fraud. How can you actually know how much you are wasting on fraud? How many of those new clicks, installs, and conversions are actually fake?

Do you have real users with stolen attribution crediting?

Classic metrics may indicate you’re doing well when you really have wasted spending on faked clicks. There’s nothing worse than optimizing based on metrics that are being manipulated. Singular’s fraud detection and prevention features help marketers uncover activity from even the most wily fraudsters. With the help of our fraud engine and in-house fraud expertise, those unknown knowns will start to become known.

There’s a big difference between working in national security intelligence and marketing intelligence. But successful intelligence workers share a common trait: they are excited about the unknown.

They know that things they thought to be true are often not. They can approach every day without assumptions and make new discoveries. Eventually, the unknowns become known, and there are deeper, more interesting unknowns to unpack. Not only is marketing intelligence an adventure, it’s a lot less risky than searching for weapons of mass destruction.

To learn more about how marketing intelligence can help you venture into the unknown unknown without the tricky language of a career politician, contact us for a demo today.